For Asian Pacific American Heritage Month—celebrated in May to commemorate the arrival of the first Japanese immigrants to the United States on May 7, 1843 and to mark the anniversary of the transcontinental railroad completion on May 10, 1869—UC Press is proud to feature several titles that recognize the complex lives and histories of Asian Pacific Americans.

“Katherine Irwin and Karen Umemoto paint a vivid portrait of the penetration of this racist and gendered penal state into the life fabric of Pacific Islander youth. . . . this is an important book that brings a much-needed contribution to scholarship on Hawai‘i as a critical site for the study of colonialism and violence while foregrounding gender oppression.”—Punishment and Society

In the context of two hundred years of American colonial control in the Pacific, Katherine Irwin and Karen Umemoto shed light on the experiences of today’s inner city and rural girls and boys in Hawai‘i who face racism, sexism, poverty, and political neglect. Basing their book on nine years of ethnographic research, the authors highlight how legacies of injustice endure, prompting teens to fight for dignity and the chance to thrive in America, a nation that the youth describe as inherently “jacked up”—rigged—and “unjust.”

This book retheorizes the connections among history, memory, and power and refashions the fields of American studies, Asian American studies, and refugee studies not around the narratives of American exceptionalism, immigration, and transnationalism but around the crucial issues of war, race, and violence—and the history and memories that are forged in the aftermath of war. At the same time, the book moves decisively away from the “damage-centered” approach that pathologizes loss and trauma by detailing how first- and second-generation Vietnamese have created alternative memories and epistemologies that challenge the established public narratives of the Vietnam War and Vietnamese people

Driven Out
The Forgotten War against Chinese Americans
by Jean Pfaelzer

“This much-needed survey of the anti-Chinese movement has broadened our vision in the comprehension of American race relations at large.”—Oregon Historical Qtly

Driven Out exposes a shocking story of ethnic cleansing in California and the Pacific Northwest when the first Chinese Americans were rounded up and purged from more than three hundred communities by lawless citizens and duplicitous politicians. From 1848 into the twentieth century, Chinatowns burned across the West as Chinese miners and merchants, lumberjacks and fieldworkers, prostitutes and merchants’ wives were violently loaded onto railroad cars or steamers, marched out of town, or killed. But the Chinese fought back—with arms, strikes, and lawsuits and by flatly refusing to leave, and even facing brutal pogroms, they stood up for their civil rights.

“This book is a welcome and needed study of the Filipina/o American experience in the Pacific Northwest. . . . This is an important, broadly conceived study that is worthy of the attention of all students of immigrant history.”—Cary C. Collins Books For The Western Library

Historically, Filipina/o Americans have been one of the oldest and largest Asian American groups in the United States. In this pathbreaking work of historical scholarship, Dorothy B. Fujita-Rony traces the evolution of Seattle as a major site for Philippine immigration between World Wars I and II and examines the dynamics of the community through the frameworks of race, place, gender, and class. By positing Seattle as a colonial metropolis for Filipina/os in the United States, Fujita-Rony reveals how networks of transpacific trade and militarism encouraged migration to the city, leading to the early establishment of a Filipina/o American community in the area.

“Robinson moves the field of Asian American history considerably toward an understanding of how myriad individuals and institutions tackled the vexing problem of Japanese American citizenship once the federal government revoked internment.”—Ellen D. Wu, Indiana University Jrnl Of American History

After Camp illuminates various aspects of a central but unexplored area of American history: the midcentury Japanese American experience. A vast and ever-growing literature exists, first on the entry and settlement of Japanese immigrants in the United States at the turn of the 20th century, then on the experience of the immigrants and their American-born children during World War II. Yet the essential question, “What happened afterwards?” remains all but unanswered in historical literature. Excluded from the wartime economic boom and scarred psychologically by their wartime ordeal, the former camp inmates struggled to remake their lives in the years that followed.

The Life of Paper: Letters and a Poetics of Living Beyond Captivity by Sharon Luk

“The Life of Paper is a remarkable, eloquent, erudite, and insightful work. Luk looks at the letters written from prison by raced subjects as a site of contestation and negotiation, of self- and community-making. This book offers a fully theorized analysis of how the poetics of the letter function in the contexts of racialized incarceration, and in the process offers a profound powerful and generative analysis of the links that connect place, race, poetics and power to imprisonment.”—George Lipsitz, author of How Racism Takes Place

The Life of Paper offers a wholly original and inspiring analysis of how people facing systematic social dismantling have engaged letter correspondence to remake themselves—from bodily integrity to subjectivity and collective and spiritual being. Exploring the evolution of racism and confinement in California history, this ambitious investigation disrupts common understandings of the early detention of Chinese migrants (1880s–1920s), the internment of Japanese Americans (1930s–1940s), and the mass incarceration of African Americans (1960s–present) in its meditation on modern development and imprisonment as a way of life. 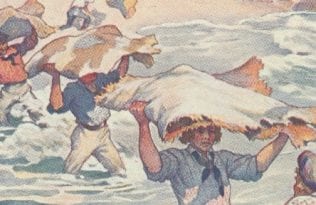