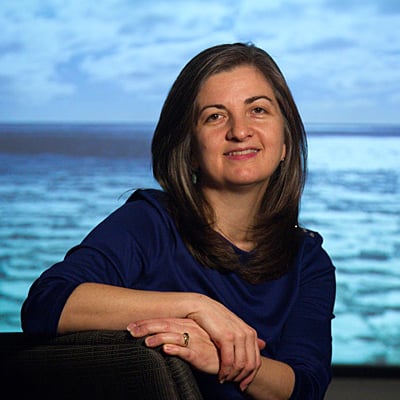 Please describe the focus of the ASPIRE Special Feature.

The Amundsen Sea hosts the most productive polynya in all of coastal Antarctica, with its vibrant green waters visible from satellites. It is also one of the global regions most vulnerable to climate change, experiencing rapid losses in both sea ice cover and nearby ice sheets. Here we report on the results from the Amundsen Sea Polynya International Research Expedition (ASPIRE) that investigated the processes responsible for this high productivity and the fate of the bloom, with an eye towards predicting how this system will respond to further change. Following some preliminary analyses (Yager et al. 2012), this Special Feature is the first full-team effort to report individual findings and synthesize our results into a complete picture of this extraordinary ecosystem.

What do the papers already published in this Special Feature explore?

So far, we have 12 papers published and 2 others in-progress.

Of the papers already on the website, one paper (Mu et al.) describes how the polynya is acting as a major carbon dioxide (CO2) sink from the atmosphere, even during the early season of the bloom. It highlights the importance of the seasonal sea ice melt in preventing loss to the atmosphere of winter CO2 buildup, and then the high biological productivity that dramatically enhances the CO2 flux from the atmosphere throughout the open water season.  Another paper (Arrigo et al.) describes the significant biological productivity associated with the seasonal sea ice, before the polynya opens, including its possible role of seeding the water column with Phaeocystis antarctica (the dominant phytoplankton in this ecosystem). Both of these papers highlight the importance of seasonal sea ice to the polynya ecosystem. Bucking the trend found when averaging over the entire continent, the sea ice in the Amundsen Sea region is undergoing significant and rapid decline. Stammerjohn et al. shows how this sea ice cover has changed over the past few decades. They report a shortening (by 2 to 3 months) of the sea ice season between 1979 and 2014, mostly by an earlier sea ice retreat in the spring.

Randall-Goodwin et al.shows how glacial melt water contributes significantly to the waters of the polynya, tracing the warm circumpolar deep water (CDW) as it comes onto the shelf, melts the bottom of the ice sheet, becomes more buoyant, and then shoals into the upper waters of the polynya. Sherrell et al. continue this discussion and show how that same melt-influenced deep water carries with it critical limiting nutrients (especially iron) for the plankton at the surface.

Alderkamp et al. and Schofield et al. investigate the contrasting limitations of light and iron on the phytoplankton using two independent approaches, one with experimental incubations and the other using in situ observations from autonomous gliders. Richert et al., illustrate how bacterial community structure also depends on light and nutrient supply, and potentially helps sustain the phytoplankton bloom.  Sipler et al. highlight the importance of organic matter inputs from sea ice to the pelagic bacteria. Wilson et al. investigates the zooplankton populations in the polynya to determine their role as grazers of the algae in both the sea ice covered areas and in the polynya water column. They report high surface concentrations of ice krill beneath the sea ice ecosystem, whereas in the open waters of the polynya, the zooplankton grazers are found living far below the surface Phaeocystis bloom, presumably because they find it difficult to feed within the highly concentrated algae. Thus, the surface bloom in the open waters of the polynya can proceed ungrazed, like a summer lawn left unmown. Ducklow et al. examines the export of material from ecosystem to depth, highlighting both the reduced role of grazers and the enhanced role of heterotrophic bacteria in the remineralization of the bloom in the mid-waters.  Garay et al. is written by a middle-school science teacher and describes the wonderful benefits to education and outreach offered by collaborations between scientists and teachers, with a shout-out to the PolarTrec program for making these opportunities possible

How will the Special Feature develop in the next few months?

Further understanding the fate of the polynya’s high productivity is the goal of the remaining two papers. Williams et al. will report on the role of bacteria and other heterotrophic microorganisms in this ecosystem, highlighting the importance of particle-associations and confirming an active and important microbial community that impacts the efficiency of the biological pump. Providing an overview of the system, Yager et al. will report on the different contributions to the carbon budget for the region, confirming that a significant fraction of the carbon taken up from the atmosphere is exported to subsurface waters.

In what ways does the ASPIRE Special Feature relate to the AGU press release announcing that the ‘fastest melting region of Antarctica has found that the melt rate of glaciers there has tripled during the last decade‘?

In the papers described above, we show a tight connection between the melting ice sheet and the provision of iron to support the phytoplankton productivity. It remains to be seen whether an increase in the rate of melting will increase delivery of iron to the polynya and increase phytoplankton productivity. This ecosystem has not been well studied by ships until recently. We only have satellite data going back to 1997, which shows high inter annual variability, but no secular trend (Arrigo et al. 2012). We are currently working with collaborators using a regional ocean model for the Amundsen Sea region (St-Laurent et al., 2015) to determine the mechanistic links between meltwater discharge and polynya productivity.  Another key variable is the seasonal sea ice, which is also important to the ecosystem function. It’s likely that computer simulations (numerical models) will be needed to tease apart the net impact of these two competing climate sensitivities.

How has publishing this research as an Elementa Special Feature benefited the presentation of your research?

We are very excited by the opportunity offered by Elementa to share our research findings to both scientists and the public. The very rigorous review process, perhaps the most rigorous I have experienced in recent years, has really helped us fine-tune our ideas and findings. We have all been very pleased by the editorial team, and appreciate their willingness to work with us to get the best product from our efforts. The open access of the journal with modest costs to the scientists is also key to communicating this important research to a larger and broader audience.

Studying Them, Studying Us, Studying Up: What Role for an Engaged Anthropology?
2014 UC Press Literary Thumbprint

Associate Editor Lisa A. Miller explains more about her support for Elementa