by Richard A. Bradley, author of Common Spiders of North America

I grew up chasing lizards and snakes in the barley and garbanzo bean fields, and sage-filled canyons, around my boyhood home in Southern California. A friend introduced me to the wonder of birds at the age of 13 and I became obsessed with birdwatching. I’ve been a birder ever since. It was during my graduate studies in New Mexico that I was transformed into a scorpion biologist. I discovered the sometimes weird, and always fascinating, world of small predators.

By the time I took my first professorial job, in Sydney, Australia, I was hooked. The spiders and scorpions of Australia are spectacular, and sometimes even dangerous. Later when I was hired at the Marion campus of The Ohio State University I began work on biodiversity surveys of Ohio’s spiders. I discovered, while giving public programs, that there were few good reference works for identification of spiders in North America. The books available at the time had limited coverage and often focused on the features of spider specimens visible with a microscope. This gap formed the genesis of my book, Common Spiders of North America.

After it was published, and read, I began to receive a constant stream of inquiries about spiders from across the country. Many were simple identification questions, but some writers were anxious to learn more about the lives of spiders that lived near them. One of the great things about spider study is that they are everywhere. A careful observer can discover remarkable things about them in the small spaces, parks, and fields of urban and suburban environments. Once over the initial hesitance, watching spiders closely fosters an appreciation. A world of micro-wildlife opens before us.

Among the fun letters I’ve received from spider enthusiasts, some include photos. At least two naturalists have included pictures of their “target” spider perched on the appropriate plate of my book. Back in March of 2014 received this wonderful photo of a large wolf spider (probably Tigrosa georgicola) from the artist, naturalist, and author Julie Zickefoose. She writes beautifully about the natural world in her books and blog. She told a story about how workers replacing siding on her house found this huge wolf spider. She retrieved it and posed the spider on the book for this photo.

Here is a photo sent to me by Amy Bianco, who educates people about spiders. She, like so many of us, has a particular affection for jumping spiders. These inquisitive spiders stare back at us with apparent curiosity. Here is Amy’s shot of a common jumping spider (a male Platycryptus undatus) perched next to his portrait on plate 66.

CATEGORIES: From Our Authors, Sciences 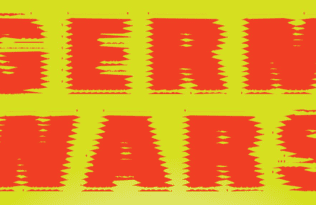