By Susan Terrio, author of Whose Child Am I?: Unaccompanied, Undocumented Children in U.S. Immigration Custody

The former Attorney General’s April 2018 decision to prosecute and jail all those who cross the border illegally, including asylum seekers, led to the forcible separation of thousands of migrant children from their parents. Under this zero tolerance deterrence policy undocumented children were separated from their parents at the border, reclassified as unaccompanied alien children, and placed in federal detention. Because of the chaotic implementation of the policy and the lack of advance planning, many children spent days alone, corralled in metal cages in frigid Border Patrol stations and sobbing for their parents before the government transferred them to the Office of Refugee Resettlement (ORR), the federal agency charged with their custody. The government denied that the separations were occurring for six weeks before finally acknowledging that 2,000 children had been removed from their parents between April 19 and May 31, 2018. Only later, did the facts begin to emerge. The Trump administration actually began separating families in 2017 before the zero tolerance policy began (1). We now know that the total of separated children far exceeded what was originally reported and stands at more than 5,400 (2). In 2018 as tens of thousands of migrant children came into federal custody, government officials scrambled to create additional bed space, resorting to the use of military installations and hastily constructed tent cities in remote desert areas to house them. Too often they failed to provide special provisions for the care of young children and hired staff without sufficient vetting or training. Incredibly, they processed migrant children without creating a database to identify and track them after separation.

Following the public outrage generated by this policy, the Trump administration backed down and issued an executive order on June 20, 2018 to stop the family separations. Just six days later, a federal judge ordered the government to reunify those families (Matter of Ms. L vs. ICE). Although we thought the worst abuses were behind us, an Office of Inspector General report this summer revealed that family separations and deplorable detention conditions have continued as increasing numbers of desperate families and lone minors have crossed our Southern border. Issued after inspecting border patrol stations in the busy Rio Grande sector, the report revealed severe overcrowding and the prolonged detention of children and families who had no access to showers, soap, clean clothes, or hot food (3).   More alarming was the report from a team of lawyers and doctors who were assigned to monitor the government’s compliance with the 1997 Flores Settlement Agreement, regulating federal custody for unaccompanied minors. At a retooled warehouse in Clint, Texas in late June 2019, they found 350 children detained without adults in prison-like conditions including 100 children under five years old and babies as young as five months old. They described squalid conditions where children were held in cinder block cells without beds, diapers or access to showers, soap, and toothbrushes. They saw widespread filth, hunger, neglect, and sickness. After interviewing more than 50 individual children, they found that Customs and Border Protection agents had separated all of them from their parents after apprehension (4).

Just as the Trump administration has failed to protect vulnerable children in Border Patrol stations, it has sought to limit protections for them in ORR custody. Average stays in detention have increased, release to undocumented family members in the US has become more difficult, and in August of this year, the Trump administration moved to eliminate the 1997 Flores Settlement Agreement that guarantees detained minors humane treatment in detention and prompt release to sponsors. These aggressive deterrence and enforcement policies have not stopped the migration of desperate Central American and Mexican children fleeing violence in their home countries. Apprehensions and referrals of migrant children to ORR reached record levels: 67,100 in 2019 up from 40, 810 in 2017 (5). After closing controversial tent cities in Texas, the government turned to Comprehensive Health Services, a for-profit contractor, to manage a huge, temporary influx facility in Homestead, Florida that houses up to 2,350 migrant children. In contrast to the permanent federal shelters run by non-profits, the Homestead facility is not licensed by the state. At $775 per child per day, its contract is worth $220 million, three times the cost of a non-profit (6). The for profit industry for detaining immigrant children mirrors the pervasive use of corporations like CorpsCivic, GEO, and LaSalle, who run adult immigration prisons and reap huge financial rewards from enhanced border and enforcement policies.

While every nation controls its borders and regulates immigration, the current administration is trampling on the rights of undocumented children and families. Government officials use language that disguises the concrete effects of violence and imprisonment; justify harsh policies through false information and misleading data; and, most alarming, institute practices that directly result in trauma, suffering, disappearance, and even the death of child migrants. The first step is to counter this disingenuous rhetoric and to hold government officials accountable for their words and actions. Undeniably, the safety and well-being of all children and families depend on it.

Growing Up with Fantasy
Environmental Apocalypticism 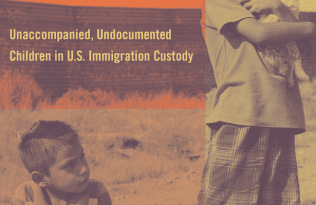 Whose Child Am I? author interviewed on WAMU 88.5 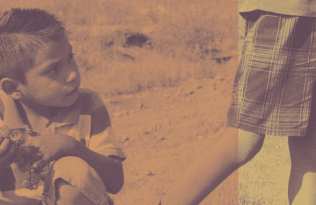