This guest post is part of our ASC blog series published in conjunction with the meeting of the American Society of Criminology in San Francisco, CA, November 13-16.

Detainees in Brooklyn City Jail spent a week last winter without heat or electricity on lockdown in their darkened cells where temperatures sank below freezing. A few miles away, the mistreatment of people in custody at Rikers Island has become so routine that it is set to close.

New York is not alone in either the inhumane conditions or the system through which people in custody can request remedy. The Prison Litigation Reform Act (PLRA) of 1996 limits prisoners’ access to court by, among other things, requiring them to exhaust the grievance system within their institutions before filing a lawsuit.

As part of our research on California’s prisoner grievance system, we interviewed people who are incarcerated in California prisons and staff employed by the California Department of Corrections and Rehabilitation (CDCR), and we analyzed hundreds of grievances filed by prisoners. As we document in Appealing to Justice, the CDCR grievance system is replete with conflicts of interest, bureaucratic mazes, and—mostly—denials. The prisoners we interviewed told us it was “a joke” and “nothing ever comes from it.” Prison officials who review these grievances were hard-pressed to remember a time they believed a prisoner or granted a grievance filed by a person who is incarcerated. One official told us, “I believe staff over inmates. Always. Always. Always.”

Perhaps this is not surprising given that these grievance processes are staffed entirely by corrections personnel. In California and most other states, when a prisoner alleges that an officer trashed their cell, or that they were denied critical medical treatment, or that their family photos were confiscated, the allegations are responded to by corrections officials who act as defendant, judge, and jury.

The results are sometimes fatal. California prisoner David Pastor (pseudonym) was in severe pain and asked to see a specialist, using the official grievance form. He wrote that the situation was urgent and concluded his appeal, “I respectfully ask for help.” His request was denied. He made another request, but before it was answered, he was dead.

If we are ever to have minimally safe and humane prisons and jails, we need a grievance system through which those in custody can have their pleas for help heard by those without a stake in denying them. Independent, third-person review would not guarantee a plaintiff’s success, but without it there is little hope for systematic redress as a result of the grievance system.  Our analyses in Appealing to Justice persuade us that truly meaningful reform will require far greater strides. Indeed, this book raises important questions about how to ensure prisoners are heard when addressing problematic conditions of confinement.  Eventually, of course, we must confront the fact that our democracy imprisons more of its people than any other country in the world. 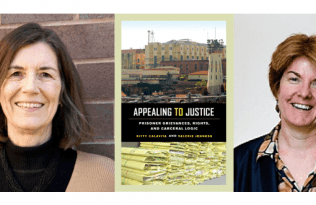