This Fall season UC Press is pleased to be publishing paperback editions of critically acclaimed texts from leading scholars, with topics ranging from histories of 20th-century fascist and contemporary populist movements, to the ways in which technology has disrupted our foundational notions of labor and organization.

Uberland
How Algorithms Are Rewriting the Rules of Work

“A timely look at the tensions between technology and the future of employment, and how ambitious startups might be changing the way we see and value work.”
—Mother Jones

“This jargon-free and intriguing exposé offers food for thought for anyone interested in worker protections or societal changes driven by technology.”
—Publishers Weekly

To Repair the World
Paul Farmer Speaks to the Next Generation

“[Farmer] offers an anthology of 19 speeches on global health initiatives delivered between 2001 and 2012. . . .[from which] readers will emerge with a heightened sense of the responsibilities and sacrifices required of future public servants.”
—Publishers Weekly

“…[To Repair the World] does not disappoint.”
—Los Angeles Review of Books

From Fascism to Populism in History

“Is Trump fascist? A proto-fascist? Fascist-curious? In his thoughtful new book, From Fascism to Populism in History, New School historian Federico Finchelstein concedes that Trump’s campaign ‘had clear fascist and racist undertones,’ and he cites the ‘fascist pedigree’ of Trump’s ‘America first’ slogan.”
—The Washington Post

“This is a provocative, important, and also at times exasperating book, destined to inspire new histories and fire up many heated debates. Passion endows Finchelstein’s narrative with clairvoyance and urgency.”
—American Historical Review

“Based on visits to the Turkish-Syrian border, online interviews with jihadists, and the access to leaders he enjoys as one of the Arab world’s most respected journalists, Atwan draws a convincing picture of the Islamic State as a well-run organization that combines bureaucratic efficiency and military expertise with a sophisticated use of information technology.”
—New York Review of Books

“Deeply researched . . . Atwan provides a thorough overview of the group’s structure, philosophy, and recruitment methods—particularly its digital media savvy. . . . Few readers of this painful, lucid account will quarrel with Atwan’s assertions that Western ignorance, hypocrisy, and self-interest contributed to the rise of ISIS, and that there is little sign of Western leaders growing any wiser.”
—Publishers Weekly

“…[Race and America’s Long War contains] a wealth of ideas that are vitally important to understanding the current sociopolitical moment.”
—Pasatiempo

“The components of this story have been told separately elsewhere; Singh’s achievement is to synthesize a broad swathe of scholarship into a singular sweeping argument. . . . Race and America’s Long War effectively consolidates the existing scholarship on racial capitalism and opens up new avenues of exploration in connecting racism and war. For these reasons, it is a remarkable work.”
—Race & Class 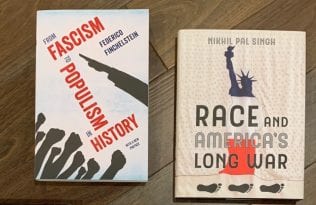