“The exhibition catalog fairly glows with transcendent images, many of which are nominally landscapes that are less descriptive than visionary reactions to the natural world.”

Chiura Obata (1885–1975) was one of the most significant Japanese American artists working on the West Coast in the last century. Born in Okayama, Japan, Obata emigrated to the United States in 1903 and embarked on a seven-decade career that saw the enactment of anti-immigration laws and the mass incarceration of Japanese Americans during World War II. But Obata emerged as a leading figure in the Northern California artistic communities, serving not only as an influential art professor at UC Berkeley for nearly twenty years, but also as a founding director of art schools in the internment camps.

With a prodigious and expansive oeuvre, Obata’s seemingly effortless mastery of, and productive engagement with, diverse techniques, styles, and traditions defy the dichotomous categorizations of American/European and Japanese/Asian art. His faith in the power of art, his devotion to preserving the myriad grandeur of what he called “Great Nature,” and his compelling personal story as an immigrant and an American are all as relevant to our contemporary moment as ever.

“More than 100 paintings demonstrate an artist who’s hard to categorize stylistically. But Obata’s obsession with natural beauty is obvious. In “Mountain Mist,” splotched black hills and quaint houses make what could appear to be an old Japanese village blanketed by fog. It’s actually a scene from Gilroy in the 1930s. Obata was born in 1885 in Okayama, Japan, and moved to San Francisco in 1903. What he and other Japanese immigrants found was an America emerging from intolerance. While Obata thrived in the arts society, there was still a bridge to build between two countries destined for war.”

Chiura Obata: An American Modern is on view at the Crocker Art Museum in Sacramento through September 29th. Don’t miss out on seeing this important and impressive show. It will also travel to the Smithsonian American Art Museum in Washington D.C. (November 1, 2019–April 12, 2020).

Read recent reviews of the exhibition in the San Francisco Chronicle and the Sacramento News & Review.

To Fix Our Broken Health Care System, Include Black Providers
Communist and Post-Communist Studies is moving to University of California Press 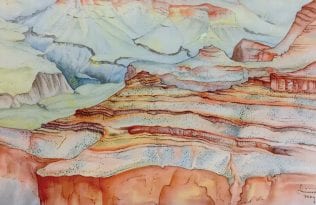