The Association of University Presses held their 2019 annual conference in Detroit, MI from June 11-13. Several UCPress staff members attended the conference, which focused its programming this year on themes of diversity, inclusion, and equity.

When I started my new job as publicist at the University of California Press last December, I was given a swag bag: a branded tote with a folder of useful info and some office supplies, Mark Twain coasters, a UC Press published cookbook, and two of our popular “Scholar-Activist” scholarly conference giveaway buttons. Six months later, I’ve accumulated more of these buttons and now I find them around my house like forgotten cash in unused jackets, conference totes, suitcases.

I’m a lapsed scholar at best, and still working on being a more active activist. But I keep a small hoard of “Scholar-Activist” buttons to show off and press into the hands of friends and strangers because UC Press’s commitment to its mission is what makes me proud to work in this industry. When I consider what would benefit me most in terms of “professional development,” it’s a lot less SEO training and a lot more radical upheaval of the ivory tower. Bear with me, this essay is about the AUP conference.

When I got to the conference hotel in Detroit, I found one of these buttons at the bottom of my purse and pinned it to my badge lanyard. Proud nerd staff member alert. I was not expecting the conference itself, or my version of it, to reflect an industry-wide sense of the same urgency that keeps the fire burning in my cubicle in Oakland. From the opening banquet speech, it was pretty obvious that we were in for much more than a series of panels and collaboration labs on how to make scholarly publishing more efficient and profitable. Lauren Hood, Detroit native and urban-planning-slash-community-activism powerhouse, delivered a highly quotable call to action at the banquet: “How many minds can be changed by the collective efforts of the people in this room?”

Industry conferences are very much what you make them: your session itinerary informs your takeaways. I definitely could’ve come home to California with a freshly stocked toolkit for business-oriented goal verbs like optimizing, capitalizing, streamlining; and I’m sure plenty of attendees did just that. I could certainly benefit from better understanding the business side of things! But scrolling through Twitter, trying to keep up with the world, has me riled up this year; I wanted to hear about what AUP and its member presses are doing to fundamentally shake up the system. I marked up my program, took messy notes, and clap-emoji’d on Twitter from panels and labs on anti-racism, gender inclusivity, and system-wide diversity initiatives.

There was a pretty good chance that a conference programming umbrella of “Diversity, Inclusion, & Equity” could fall woefully short, or pay only lip service, but by the second day I was gushing in good company on Twitter about the scope of the fundamental issues that the programming addressed. Transparency about pay among staff members in marginalized groups? Yes! Normalizing the practice of allowing staff, authors, and collaborators to state their pronouns? Yes! A PowerPoint slide titled “The Work Required of White People”? Uhhh, yes, needed it yesterday! Did I die and go to Scholar-Activist heaven, or am I actually working within a community hell-bent on dismantling the white supremacist legacies of academic institutions that, until so recently, were even more hell-bent on excluding non-white non-rich non-men?

The word that’s repeated over and over in my mind in the days since AUP 2019 is “galvanizing.” No shame here in gushing about how much a handful of panels on anti-racism and equity gave me hope in this dark and confusing contemporary reality. There is too much work to be done to derail this surreal runaway train headed for fascism; “Scholar-Activism” feels increasingly exhausting, useless, impossible. And I’m a young, white, cis-passing, private-university-educated femme! How can we expect to foster and galvanize a scholarly publishing community of diverse voices, life experiences, socioeconomic realities, if we aren’t actively having conversations about tangible and long-term and system-wide change?

It starts with intentionally equitable hiring practices; with updated language in style guides and author questionnaires; with participation in anti-racism training by those who never attend, but need it most. It starts with a conference like AUP 2019, where this radically earnest book publicist was highly unqualified for the mentorship program but became a mentor anyway. It starts with my mentee, who matched my enthusiasm and reminded me that young people in this industry need each other, and need to do the work to hold ourselves and our peers accountable to this nebulous goal of “change.”

I’m back in Oakland not with concrete knowledge of how to optimize my tweets, but with a feeling of maybe, possibly, hope. Maybe, possibly, agency. Maybe, if we Shift Those Paradigms; possibly, if we Do The Hard Work; we can perpetuate practices and structures of leadership that reflect the diversity of thought and experience inherent in both scholarship and activism. Let me know if you want a button. 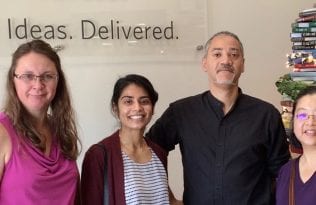 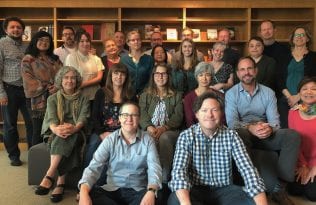