This blog post was originally included in the University of Washington “Tide Bite” enewsletter. Click here to see the original version.

Tiny microbes are on the prowl to undermine the health of our oceans. Epidemics of our ocean biota are often unseen beneath the waves, so I have written a book about the impacts of underwater outbreaks, a first-hand account of our trials and adventures while chasing epidemics from Mexico and Hawaii to Indonesia and back to the Salish Sea. I focus on the stories of four of these outbreaks to describe how the epidemics unfolded, to figure out what microbe(s) were causing the outbreaks and to record the impacts to both ocean biodiversity and people. As a group, my students, colleagues and I have spent a lot of time underwater, so this is also a tale of our explorations, struggles and triumphs in strange places.

An excerpt from Ocean Outbreak about the Seastar Wasting Epidemic:

We had assumed in October 2013, when sent the photos from Neil McDaniel (below) showing a population of sunflower stars that were decimated over 3 weeks at Croker Island, B.C., that this was a localized event affecting a single species like the other events we had seen. Doubts about the geographic restriction of the starfish die-off had surfaced, however, when we learned in November 2013 that the Vancouver, Seattle, and Monterey aquariums had each lost dozens of stars in their tanks. Against this background, Pete Raimondi’s email saying that thousands of sea stars from at least ten species were dying fast in the waters around Monterey, California signaled something much more worrisome than a local die-off of one kind of sea star. Were we seeing the beginnings of a disease outbreak that could affect the entire Pacific coast? 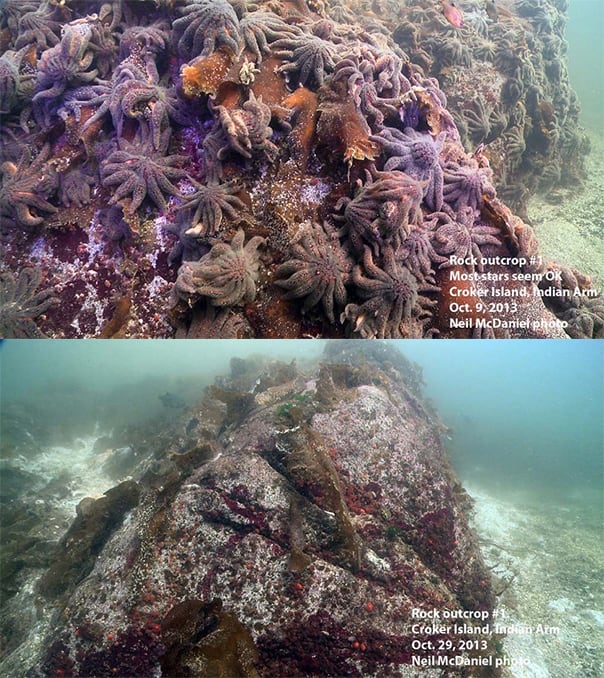 In addition to being concerned about the broad geographic extent of the outbreak, I was worried because it involved sea stars, and not just one species but many. Sea stars may seem innocuous and almost inanimate given the glacial pace at which most species move, but they are the lions of our seascape. Even a few can control the structure and composition of the surrounding ecosystem by eating huge numbers of the mussels and oysters that would otherwise dominate. The West Coast of the United States has a bright medley of different sea star species, second only to Australia for temperate waters. There are approximately eighty species described in the eminent marine biologist Eugene Kozloff’s key for Puget Sound and the San Juan Islands in Washington. The catastrophic loss of not only ochre and sunflower stars but other species as well over a broad swath of ocean could have a domino effect on ocean ecology, causing a cascade of changes that might ultimately impact animals—such as abalone and salmon—that humans depend on for food.

We stepped off our flight in Seattle at 4:00 pm in mid-December 2013 and ran for our car, hoping to beat the rising tide at Alki Beach. We reached the rain-slicked parking lot near Cove 1 at Alki Beach and put on our headlamps, donned plastic gloves, and pulled out our notebooks. Clambering in the dark over slippery boulders, we move down the beach toward the receding tide. Our headlamps picked up looming boulders and the edges of pilings on the dark shore as we crunched across gravel, looking for sea star bodies. Across Elliott Bay we could see the bright lights of Seattle. “Look, here’s an arm,” Laura called.  “Yeah, that’s an Evasterias,” I replied as I hunkered down to look at the deflated, ripped-off arm, tube feet moving slowly. “Oh, and I guess that’s the rest of it,” I said as I pointed to a flattened, almost-dead four-armed star. We saw four purple stars clustered together, half in the water, with twisted arms and small lesions; we would come to recognize these as tell-tale signs of the wasting disease. As we walked along the water’s edge, we found more and more arms and parts of stars. I realized, with a sick feeling, that the beach was littered with them. Many were clearly dead, but occasionally we would find one with moving tube feet, or a star in the process of having its arm tear away from the body and walk off on its own. It was so unreal and unnerving. It was a macabre scene.

My brain was in overdrive trying to detect every clue to the cause and any patterns driven by variation in the environment. If an infectious agent was the cause, why was it suddenly breaking out? Why was it continuing into the winter? Why was it more lethal for sub-tidal stars? Was the agent killing other animals? How was it transmitted — was it conveyed in their food? How many species of star were affected? Another question with personal significance rapidly emerged: were the sea stars in the San Juan Islands sick as well?

Case Studies in the Environment announces winners of 2018 prize competition
World Book Day: A Look at the Future 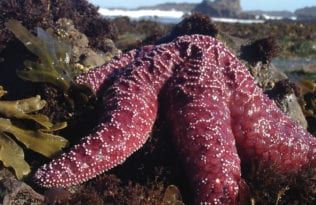