This excerpt is published as part of our blog series in conjunction with the Organization of American Historians conference in Philadelphia from April 4-7, 2019. Share using #OAH19.

In his engrossing new book, Workers on Arrival, renowned historian Joe William Trotter, Jr. charts the black working class’s vast contributions to the making of America. Covering the last four hundred years since Africans were first brought to Virginia in 1619, Trotter traces black workers’ complicated journey from the transatlantic slave trade through the American Century to the demise of the industrial order in the 21st century.

At the center of this compelling, fast-paced narrative are the actual experiences of these African American men and women. In chapter one, Trotter introduces us to the workers who did not passively accept their lot in early preindustrial America: 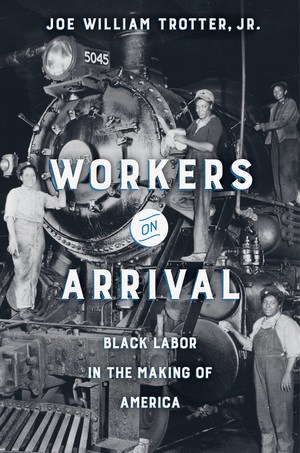 Although black workers celebrated their movement into the industrial city as evidence of upward mobility and progress outside southern agriculture, several overlapping developments soon undercut the extraordinary promise of the “promised land.” Employers, white workers, and the state collaborated to erect a racial job ceiling in the workplace and a racially segregated housing market across the urban landscape. Black workers challenged deepening forms of racial inequality in the economic, institutional, and political life of the city, holding their ground whenever possible in the face of mob violence and recurring day-to-day assaults on their persons in public spaces. But as the Great Migration brought more and more African Americans north, their social struggles helped to gradually reshape the institutions and culture of the industrial city.

The numbers are staggering. An estimated three million African Americans moved from the rural and urban South to the North and West during the interwar years of the Great Migration. Another five million black people left the South for the urban North and West between 1940 and 1980.1 Rising numbers of rural blacks also moved into the urban industrial South. During World War II alone, over two million migrants moved from one southern state to another. In search of a better life, some of those who made up the Great Migration organized their own movement from farm to city and from South to North and West, writing letters of inquiry to local branches of the National Urban League, to northern black newspapers like the Chicago Defender, and most of all to relatives and friends who had already moved to industrial cities. Others organized “migration clubs,” pooled their resources, and purchased railroad tickets at reduced rates. Still others responded to the transportation, job, and housing offers of industrial labor recruiters.

The industrial sector offered a significant incentive to blacks in southern agriculture. African Americans who moved directly from a southern farm labor job to the urban North may have increased their earnings by as much as 300 percent in some cases. Even after adjustments for the higher cost of living in their new homes, a recent econometric study suggests that increases in migrant earnings ranged from a low of about 56 percent to a possible high of 130 percent. Based partly upon expanding employment in the industrial sector, black workers often described northern, western, and to some extent southern cities in glowing terms as the “Promised Land,” “New Jerusalem,” “Land of Liberty,” “Land of Hope,” or simply the “land of milk and honey.”

Industrialists focused the bulk of their labor recruitment efforts on blacks in the Deep South states of Alabama, Georgia, Mississippi, Louisiana, and Texas.4 One employer sprinkled handbills across the wartime Alabama sharecropping region. The broadside queried prospective black migrants: “Would you like to go North where the laboring man shares the profit with the Boss? . . . Will advance you money if necessary. Go now. While you have the chance.”5 The Pennsylvania Railroad; the New York Central; the New Haven, Delaware, and Hudson; the Illinois Central; and other railroad companies recruited black labor for a wide range of manufacturing companies as well as their own extensive rail operations.

As a result, African Americans gained increasing access to jobs in the nation’s railroad, shipbuilding, meatpacking, steel, rubber, and automobile manufacturing firms. Nationwide, the percentage of black men employed in “skilled,” “semiskilled,” and “unskilled” jobs other than domestic service increased from about 34 percent on the eve of World War I to an estimated 43 percent in 1930. Over the same period, the number of black workers jumped from under 600 in the auto industry to nearly 26,000; from 17,400 to 45,500 in steel; and from 5,800 to 20,400 in the meatpacking industry. By the end of World War II, although blacks continued to work disproportionately in household and general labor jobs compared to their white counterparts, nearly 75 percent of all African Americans (predominantly men) worked in nonfarm jobs defined as “unskilled” or “skilled” segments of the black working class.

Each region and each industry had its own unique features or flavor as well as similarities. Some railroad, steel, and meatpacking firms had employed southern black workers as strikebreakers before World War I. In these industries, interwar black newcomers reinforced earlier concentrations of blacks in the industrial workforce. As discussed in chapter 3, the nationwide railway strike and boycott of the Pullman Company, the Chicago-based manufacturer of the popular “sleeping cars,” and the New York’s longshoremen’s strike the next year had opened both of those jobs to black workers. Some Philadelphia firms also built upon their pre–World War I experiences with black workers. As early as the 1890s, for example, the city’s Midvale Steel Works employed African Americans in skilled as well as general labor positions. Under manager Frederick Winslow Taylor, a pioneering time- management specialist, the company attacked white-worker solidarity and undercut efforts to unionize the plant. “Now our gangs have, say, one Negro, one or two Americans, an Englishman, etc. The result has been favorable both for the men and for the works. Things run smoothly, and the output is noticeably greater.”

The U.S. Steel Homestead works, the Jones and Laughlin Steel Company, and Carnegie Steel built upon their prewar history and expanded their black labor force in Pittsburgh and western Pennsylvania. African Americans rose from only about 3 percent of workers in the steel industry in 1910 to nearly 15–20 percent during the height of the interwar years. Some companies— Oliver Iron and Steel, Pittsburgh Forge and Iron, and A. M. Byers among others—hired black workers for the first time, while other Pittsburgh iron and steel men had employed black strikebreakers during a series of steel strikes between 1875 and 1909. At the city’s Black Diamond Steel Works and the Clark Mills, African Americans also gained access to such skilled jobs as roller, rougher, finisher, puddler, millwright, and heater. In some cases, they even supervised some of their less skilled white counterparts.

Finally, Chicago employers also built upon a coterie of black workers from prewar strikebreaking activities. Such manufacturing firms as Swift, Armour, Pullman, and International Harvester added increasing numbers of blacks to their payrolls. The Teamster strike of 1905 had resulted in a few jobs for blacks when the strike ended and white workers returned to their routes, but the stockyards strike of 1904 had brought over 360 black workers into the meatpacking industry. Soon after the stockyards strike, the segregationist governor of South Carolina, Ben Tillman, visited the city. The black workers, Tillman said, seeking to stir northern white working-class racial hatred, “whipped you in line. They were the club with which your brains were beaten out.