by Geoff Childs, co-author of From a Trickle to a Torrent: Education, Migration, and Social Change in a Himalayan Valley of Nepal 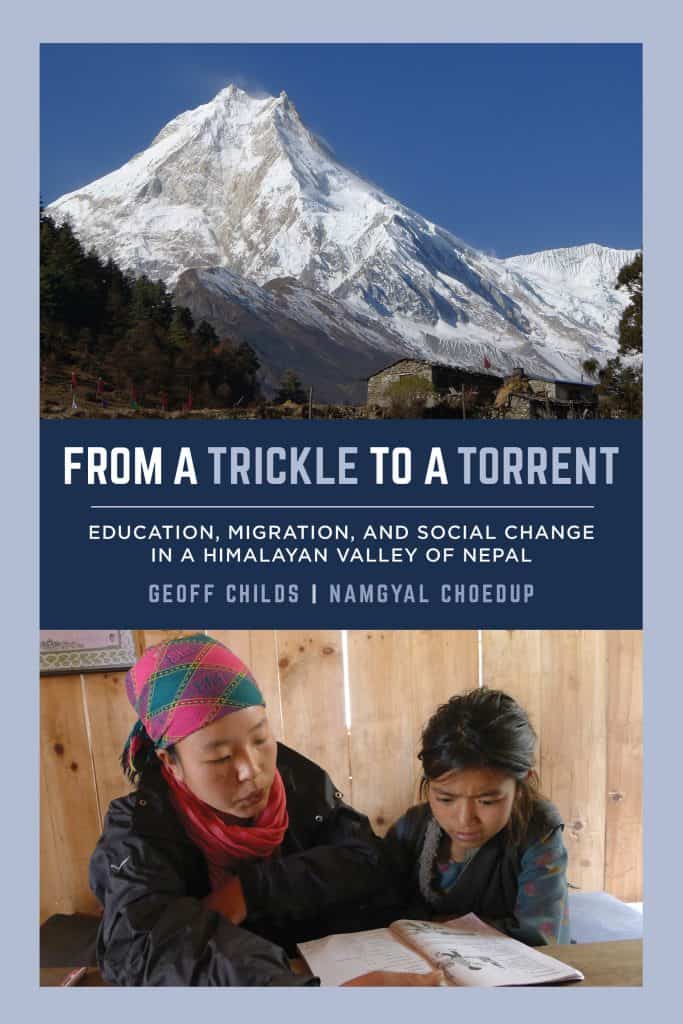 Universal education for children is intrinsically good, right? It’s hard to argue against a moral position we accept as self-evident and that drives a tremendous amount of generosity to support education in poor countries. Contrast a picture of a morose child dressed in rags with a beaming kid holding books and clad in a crisp school uniform. Voila, you have a philanthropic mechanism to convey that you, a potential donor, can make a difference in a child’s life. But the eagerness to advance education is often accompanied by little if any critical reflection on unintended consequences.

Namgyal Choedup and I set out to grapple with the effects of educational migration from Nubri, a highland enclave in Nepal. We began the project after noticing a dearth of young people in Nubri’s villages, a gap in the demographic spectrum that is related to education, or more specifically, to a lack of local schooling opportunities. Parents were sending droves of children to boarding schools and monasteries in Kathmandu—a five-day walk down precarious trails—in response to shifting perceptions about the value of education, and the government’s inability to develop a local school system. By the time we completed household surveys in 2013 roughly three-quarters of young people aged 10-19 no longer lived in their natal households. If not for a few privately funded boarding schools and monasteries in Nubri, it is plausible that there would have been no children other than infants and toddlers in the villages. From a Trickle to a Torrent documents parental rationales for sending children outside for education, analyzes the social and religious networks that facilitate this migration phenomenon, and sheds light on unanticipated issues that are affecting a Buddhist society exquisitely adapted to a high-altitude environment, but now standing on the brink of irreversible change.

Universal education is no doubt an admirable goal. But in the case of Nubri, the lack of local facilities dislodges children from their natal environment, disrupts cultural transmission, and disembodies nuclear families. Even the argument that a well-endowed urban school can give children a better start in life may not hold up to scrutiny. Biological Anthropologist E.A. Quinn and I have documented that Nubri’s children who are raised in urban boarding schools do not necessarily fare better on growth and development indicators than their counterparts in the village. This finding begs the question: Why is so much capital devoted to building schools in and recruiting students to a congested urban environment where the air is foul and the water polluted? Would it not be better to keep children in the mountains among kith and kin where they can learn to read and write while internalizing the unique nuances of their indigenous culture? Localizing education will not stem the worldwide flow of rural to urban migration. But at least it will allow children to grow up with a place-based identity and sense of community that are impossible to replicate in an urban boarding school.