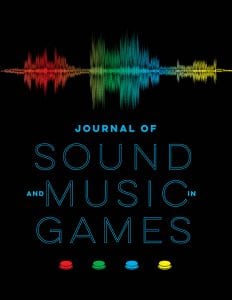 The first issue of the journal will publish in January 2020.

Journal of Sound and Music in Games (JSMG) is a peer-reviewed journal that presents high-quality research concerning all areas of music and/or sound in games. It serves a diverse community of readers and authors, encompassing industry practitioners alongside scholars from disciplinary perspectives including anthropology, computer science, media/game studies, philosophy, psychology and sociology, as well as musicology. JSMG is the only journal exclusively dedicated to this subject and provides a meeting point for professionals and academics from any tradition to advance knowledge of music and sound in this important medium.

As the journal of the Society for the Study of Sound and Music in Games, JSMG acts as a lively forum for the presentation and dissemination of knowledge, uniting theory and practice in this domain of musical-sonic activity. 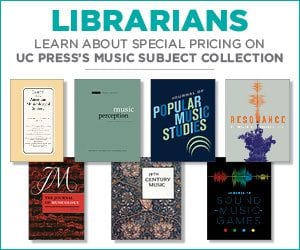 The complete Editorial Board of Journal of Sound and Music and Games can be accessed
here.

Submit Your Work
The journal welcomes submissions for its inaugural volume. Please review the journal’s instructions for contributors prior to submission. All editorial inquiries should be directed to jsmg@sssmg.org

About the Editorial Team

Elizabeth Medina-Gray is Assistant Professor of Music Theory at Ithaca College and holds a Ph.D. in Music Theory from Yale University. Her research on music and sound in video games can be found in several edited volumes including The Routledge Companion to Screen Music and Sound (Routledge, 2017) and Ludomusicology: Approaches to Video Game Music (Equinox, 2016) as well as Music Theory Online (forthcoming). Dr. Medina-Gray currently serves on the program committee for the North American Conference on Video Game Music and on the executive committee for the Society for the Study of Sound and Music in Games.

Tim Summers is Lecturer in Music at Royal Holloway, University of London. His research concerns music in popular culture, with a particular focus on video game music. He is the author of Understanding Video Game Music (Cambridge, 2016) and has edited a collection of essays on the same topic, Ludomusicology: Approaches to Video Game Music (Equinox, 2016). He is a co-founder of the Ludomusicology Research Group that holds annual conferences on video game sound. He is currently finishing his second monograph while editing the Cambridge Companion to Video Game Music.

TAGS: Journal of Sound and Music in Games, JSMG

Journal of Sound and Music in Games Publishes First Issue