This guest post is published in conjunction with this week’s annual meetings of the American Historical Association and the Modern Language Association both in Chicago, and the Society for Classical Studies in San Diego. Share using #AHA19 | #MLA19 | #AIASCS2019

By Margaret Foster, author of The Seer and the City: Religion, Politics, and Colonial Ideology in Ancient Greece 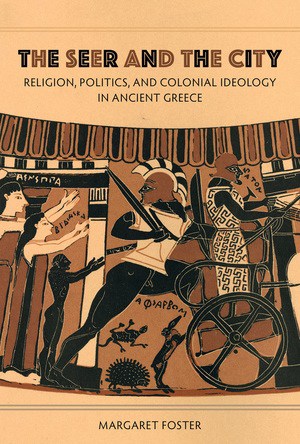 I’m often asked how I came to write about and synthesize two areas of inquiry that tend to exist in relative isolation from one another in the field of classics, divination and colonization.

The Seer and the City grew out of an observation and a paradox. First, the observation: ancient Greek colonial expeditions resembled in certain fundamental ways military ventures. Just as Greek armies could march with their commanders to the site of a distant battlefield, colonial expeditions, guided by a colonial founder, traveled to a new land in which awaited at least the possibility of a hostile encounter.

Second, the paradox: Whereas seers are frequently paired with military commanders in historical accounts and myths of late archaic and early classical Greek warfare, they rarely appear paired with colonial founders in foundation tales relating to this same timeframe.

Why does the Greek seer, a conspicuous figure in military contexts, go missing in comparable and contemporaneous colonial ones?

Why did the Greeks choose to exclude the seer, typically a prominent and pervasive figure in ancient Greek society, from colonial discourse, from the ways in which they remembered the foundations of their cities?

This paradox captures the central concern of this book. As I tried to account for it, I simultaneously began to develop a new understanding of the Greek seer. For as I began to understand the exclusion of the seer from colonial discourse as ideologically motivated, and not as merely accidental, I also started to see the Greek seer himself in a new light. I focused less on the seer as an interpreter of omens and oracles, a subject that has already received a considerable amount of scholarly attention, than as a figure of extraordinary cultural capital and the recipient of what we might think of as talismanic power.

I discovered that, viewed from this angle, the seer can be seen to intersect and even compete with other figures similarly characterized, including colonial founders.

Approaching the seer in this way suggested another explanation for the paradoxical absence of seers from colonial discourse: foundation tales shine their spotlights on colonial founders and their dependence on Delphi, the colonial oracle par excellence, and do so at the expense of the seer. As a result, the seer tends to lurk beneath the surface of these narratives. With the exception of a few remarkable examples, his presence at foundations during the height of the archaic and classical Greek colonial movement is effectively suppressed.

Part of the excitement of this project was discovering colonial discourse’s ideological excision of the seer in a whole array of diverse literary texts. While I chose to ground my chapters in specific case studies from archaic and classical authors (Homer, Herodotus, Bacchylides, and Pindar), I was able to find manifestations of the cultural phenomenon itself in a much wider range of material, from an archaic inscription excavated from an oracular shrine to the accounts of the second-century CE geographer, Pausanias. At the same time, because my study concerned central figures and institutions of Greek culture – seers, colonial founders, the oracle of Delphi – its conclusions came to extend beyond the framework of colonial discourse. That is, colonial discourse became a productive metonym for understanding both the contestatory and collaborative dynamics between mantic, oracular, and political powers operative in archaic and classical Greece.

5 chances to win a copy of Carleton Watkins: Making the West American via FlakPhoto
Reconsidering the History of Race through Peyote

The Seer in Ancient Greece