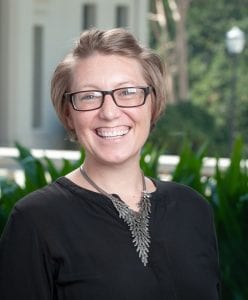 Studies in Late Antiquity has released its first special issue, “Rethinking Medical Metaphors in Late Ancient Christianity.” The special issue was guest edited by Kristi Upson-Saia, Professor of Religious Studies, Occidental College. In addition to conducting research on medicine, wounds, and scars, Upson-Saia is also co-Founder and co-Director of an international working group that studies Religion, Medicine, Disability, and Health in Late Antiquity (ReMeDHe, pronounced “remedy”). We sat down with Upson-Saia to discuss the special issue:

What will readers get from reading the papers in this special issue?

Each of the articles in this special issue help us better understand the discrete Christian authors, ideas, practices, and context that the authors study, as well as how medical ideas and practices informed Christian asceticism, ritual practices, and ecclesiology. Yet, as I discuss in more detail in my foreword to the issue, when read together this collection of articles force us to think more carefully about the precise manner by which early Christians leveraged medical terms, ideas, and practices; how scholars of late antiquity ought to study medical metaphors; and, most exciting, the extent to which we ought to regard early Christians’ medical metaphors as metaphor (or rather, as literal).

Why focus on metaphors?

Metaphors are interesting in that they are pervasive in ancient medicine. Technical medical terms for body parts, functioning, and disorders often originated as metaphors. For instance, the term for “intestines”—χορδή in Greek—describes the gut in relation to the “strings” of an instrument. The “capillaries” at the end of blood vessels are named in reference to the qualities they share with head hair (capillus in Latin). Because these terms so quickly converted to their literal, medical sense, however, we are not always cognizant of the ubiquity of metaphors in medicine.

Still more, metaphors are also interesting in that their figurative potential seems to be unending. Medical concepts and terms—even those that are themselves metaphors—can be re-mobilized as metaphors in a non-medical context. Take, for example, cancer in Latin (καρκίνος in Greek), which referred to uneven sores or wounds whose shape resembled that of a “crab.” In Oration 25, Demosthenes uses the medical treatment of cancerous growths as a metaphor through which to advocate for the expulsion of a community member; this act, he argued, would preserve a healthy social body. He writes, “Just as physicians, when they detect a cancer or an ulcer or some other incurable growth, cauterize it or cut it away, so you ought all to unite in exterminating this monster. Cast him out of your city; destroy him.”

Our special issue points to the ubiquity and expansiveness of medical metaphors and to the potential for additional studies in this area.

How does this special issue relate to the work of ReMeDHe:

In 2013, Heidi Marx and I founded ReMeDHe in response to a resurgence of research on medicine, health, and healing in late antiquity, and prompted by our desire to build a scholarly community who could establish a firm foundation for the growing subfield.

Our group has a handful of goals: First, we want to make a case for the importance of late antiquity in the history of medicine, health, and healing, seeing late antiquity not merely as a stagnant time when previous medical knowledge was compiled, but a time when people in the ancient Mediterranean were innovating and creating new medical ways of knowing. Second, we want to highlight the cross-pollination between professional medicine and other domains of society who understood health and healing to be part of their purview, namely philosophy, religion, ritual practices (sometimes labeled “magic”). Third, we want to bring together various scholarly trajectories—such as, the history of medicine, anthropology of medicine, ancient history, religious studies, and scientific studies—that have underutilized each other’s insights and, more generally, to think carefully about our methodological approaches.

The papers in this special issue meet all of the aims. They each describe in intricate detail the ways medical knowledge is thoroughly embedded in a range of late ancient Christian sources, producing newly fused religio-medical ideas and practices. Taken as a whole, and with the guidance of Wendy Mayer’s viewpoint essay, they also prompt us to think carefully about methodology, namely how we study medical “metaphors.”

If you are not already a subscriber to SLA, please consider subscribing and/or asking your librarian to subscribe.