By Jamal J. Elias, author of Alef is for Allah: Childhood, Emotion and Visual Culture in Islamic Societies 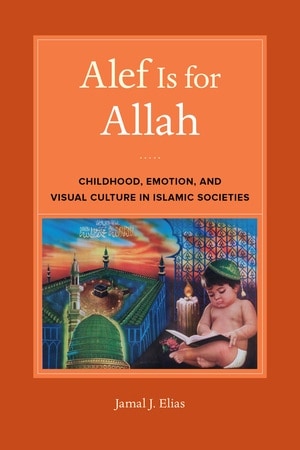 Our collective reaction to images of children in positive and negative circumstances is important for shaping society in a variety of ways. Inundated as we are with images of suffering and horror, or with the mundane nature of daily life, pictures of children have the potential to shake up our jaded sensibilities.

In Alef Is for Allah, I focus on children’s books, textbooks, news media, postage stamps and posters from Turkey, Iran and Pakistan, and place them in the broader context of the representation of childhood and children. Through embedding these materials in the social and culture contexts of the societies to which they belong, I investigate ideas of cuteness, virtue, innocence and devotion in relation to broader social contexts of nationhood, community, violence and sacrifice.

Although the book started out as a narrower project focused on religious images of children in contemporary Islamic society, it ended up as an exploration of the relationship between education and nation building, and of gendered concepts of childhood and citizenship (among other things).

Ultimately, the book demonstrates how images of children and childhood itself can be used as the focus for understanding social, religious and political change in modern societies in the Islamic world.

The issues covered in the book that I consider most important include my attempts to discuss emotion in a contextual and socially grounded manner and to explore the emotional space occupied by children. I also attempt to offer insights on the relationship between cuteness, beauty, innocence and virtue. I explore the constructions of an idealized childhood as a hermetically protected time of innocence and absolute safety, and of its complete opposite, which is an imagined child in complete destitution and danger — what I have termed “anti-childhood.”

The images in this book illustrate the way in which childhood is articulated with gender. An important point I explore is how adult women as mothers are distinguished from girls as daughters in a way that assimilates young womanhood into girlhood, creating a distinct category of the “girl-woman.” Adult females serve as the perfect counterparts to juvenile males in the relationship of mothers to sons. At the same time, virtue and sacrifice take on an age and gender inflected form, where males show virtue throw self-sacrifice whereas females show virtue through readiness to sacrifice the males who are dear to them.

Alef Is for Allah was a remarkably enjoyable project on which to work, and the illustrations in the book are a small fraction of the compelling images I collected during my research. Beyond its contributions to the understanding of modern Islamic societies, I hope the multidisciplinary approach of this book will encourage more people to take visual culture seriously as a location of childhood studies and as a lens through which to examine the gendered, emotional and religious landscapes of human experience.

Browse Alef Is for Allah in the UC Press booths at MESA, AAA, and AAR.