By Alexander Key, author of Language between God and the Poets: Ma‘na in the Eleventh Century 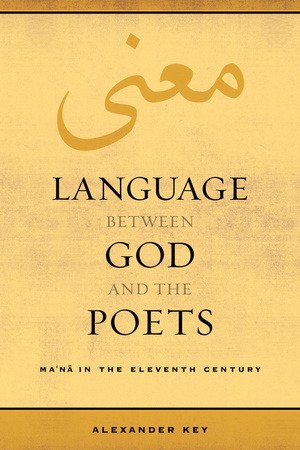 “Neither Arabic nor Persian literature has an originative poetics per se.”

With that 1990 footnote, repeated by its author Earl Miner in 2000, and then again by Jonathan Culler in the opening paragraph of his 2015 Theory of the Lyric,[1] any claim of Arabic or Persian poetics on our attention is rendered null ab initio.

One is left with a choice: to carp about the blind spots of one’s fellow comparativists, or to attempt to rebuild the originative Arabic material in English and thereby make clear that Arabic – and then Persian – have poetics worthy of our attention.

Language Between God and the Poets starts that process with a book-length study of two important words: maʿnā (roughly equivalent to “meaning”) and ḥaqīqah (roughly equivalent to “correct”). It winds back through linguistic and scholarly precedent in Arabic from the eleventh century to the seventh, and it shows how one great moment in Arabic poetics (the literary theory of ʿAbd al-Qāhir al-Jurjānī) was built on work that was being done in lexicography, theology, and logic – all in Classical Arabic. All the scholars in Language Between God and the Poets wrote in Arabic, and they all spoke Persian at home. They lived in what is now Iran, right at the moment when New Persian literature was developing in symbiosis with New Persian criticism.

There are many things here that are foreign to Anglophone poetics. First among them is the outside presence of the lexicon, the dictionary. The lexicon was a warranty for meaning, a knowledge-backstop, existing in the physical form of vast complex dictionaries, with its development iteratively managed by the discourse and discipline of lexicographers. The guarantee that the lexicon gave to theory shaped Islamic theology, and the questions raised in theology about language bled into the great reworking of Aristotelian philosophy by Ibn Sīnā (Avicenna).

This is the story of the originative poetics of Arabic, and in al-Jurjānī we can see it create a formalist critical vocabulary for the analysis of poetic syntax and affect.

To make this argument, one must translate. It was the absence of translated Arabic or Persian literary theory, alongside the presence of translated Arabic and Persian lyric in English, which led Miner to make his original slip. But translation of theory comes with its own problems, distinct from the dynamics of the translation of literature. Language Between God and the Poets argues that all translation must, always and already, contain a theory of language – a philosophical set of commitments to how language works that are almost always left unsaid. The commitments that inform my translations of Classical Arabic come from a mixture of Wittgenstein and Kuhn: Wittgenstein helps establish a methodology in which we track usage instead of mapping reference, and Kuhn helps explain how hard it is to translate theoretical vocabulary. For maʿnā is not the same as “meaning” at all; it is its own story.

Browse Language between God and the Poets in the UC Press booths at MESA, AAA, and AAR.