This guest post is published as part of our blog series related to the American Academy of Religion  annual meeting November 17-18 in Denver, CO. #sblaar18

By John H. Evans, Author of Morals Not Knowledge: Recasting the Contemporary U.S. Conflict Between Religion and Science 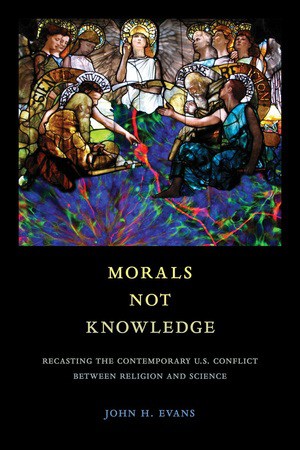 It is deeply assumed in academia that religion and science are in conflict over knowledge claims about the natural world. This is particularly thought to be true for conservative Protestantism which, unlike liberal Protestantism, Catholicism, Judaism and other religions, lacks a mechanism for integrating scientific and theological knowledge. For example, it is assumed that any conflict is due to different epistemic practices – when determining the age of the earth, evangelical Protestants look to the Bible and scientists carbon date rocks. It turns out that this may be true for academics, but is not (very) true for ordinary religious believers.

Religion was not always about beliefs. As historians have shown, during the Reformation the meaning of religion begins to shift to concern belief in propositional statements such as “the Earth is approximately 6000 years old.” Now that religion was conceptualized a system of belief, it could be “true” or “false,” and thus religion could be rationally justified. Originally, science was mobilized to support these religious beliefs, but by the mid 19th century, in the West, conservative Protestantism and science parted ways, at least when it came to claims about the natural world.

Now that religion and science were both making propositional statements about the natural world, they could be in conflict. The social sciences and humanities also defined religion as a system of beliefs, making academics assume that any conflict between religion and science must be over beliefs.

From the mid 19th century forward, the primary religion and science conflict has been over Darwin’s claims that humans evolved from non-human primates. Of the prominent religions in the public sphere in the West, Judaism, liberal Protestantism, and Catholicism have not had much conflict with scientific accounts of human origins, but what became known as “Protestant Fundamentalism” in the 1920s certainly did. For example, the accepted story from the Scopes Monkey Trial in 1925 is that fundamentalists objected to scientific fact claims about the origins of humans, preferring to believe the traditional Genesis account.

That is indeed true, but that is not necessarily what motivated resistance to Darwinian claims. History now shows that opposition was primarily rooted in moral not epistemological conflict. For example, consider William Jennings Brian, the fundamentalist opponent of Scopes at the Scope trial. It turns out that he was largely opposed to Darwinism because its moral message negatively impacted society, and believed that this moral message caused World War I by damaging the morals of German youth. As noted paleontologist and historian of science Steven J. Gould has written, when Bryan “said that Darwinism had been widely portrayed as a defense of war, domination, and domestic exploitation, he was right.”

Indeed, the immediate reaction to Darwin’s book in the 19th century was moral, with people concerned that if humans were another form of animal, then we had animal-like sexuality, which was quite offensive to the proper Victorians of the time. Moreover, the very book that John Scopes was using in that Tennessee classroom was called A Civic Biology, and it was not very concerned with evolution at all. Rather, it focused on how biology could speak to the problems of the big city with issues like food safety, quarantines and, most notably, eugenics. A close historical analysis of reaction to that book suggests that people were more concerned that it taught rural Tennessee kids what today we might call “big city values,” as well as a healthy dollop of eugenics – the idea that some humans are more valuable than others. Opposition to teaching this book seems largely motivated by what was perceived to be its moral message.

In my new book Morals Not Knowledge, I examine not only this history, but the views of contemporary religious people in the U.S. Yes, there are some people who do make religiously-justified fact claims about nature that conflict with science. However, post 1960s American religion is increasingly not about knowledge claims at all, and therefore is decreasingly likely to have any conflict over knowledge claims.

What I do show is that religion and science are increasingly in conflict over morality. Not only does the moral message implicit within Darwinism continue to cause conflict, but other moral conflicts have emerged over issues such as embryonic stem cell research and human gene editing.

This change in the reason for conflict is exemplified by the fact that I have never heard a religious person in public debates on these issues claiming the fact claims scientists make about stem cells is incorrect – only that scientists are morally wrong for pursuing the technology. Morality will be the basis of the religion and science conflict of the future.

Unfortunately, most humanistic and social scientific analyses presume that the relationship between religion and science is about knowledge. In fact, most social scientific definitions of religion are based on the idea that religion is about knowledge. While this may be true at the elite level, when we are talking about the general public, we need to reconsider our assumptions.

Browse Morals Not Knowledge in the UC Press booth at AAR.

CATEGORIES: From Our Authors, Meetings and Exhibits, Religion, Sociology