By Christopher Chowrimootoo, author of Middlebrow Modernism: Britten’s Operas and the Great Divide. 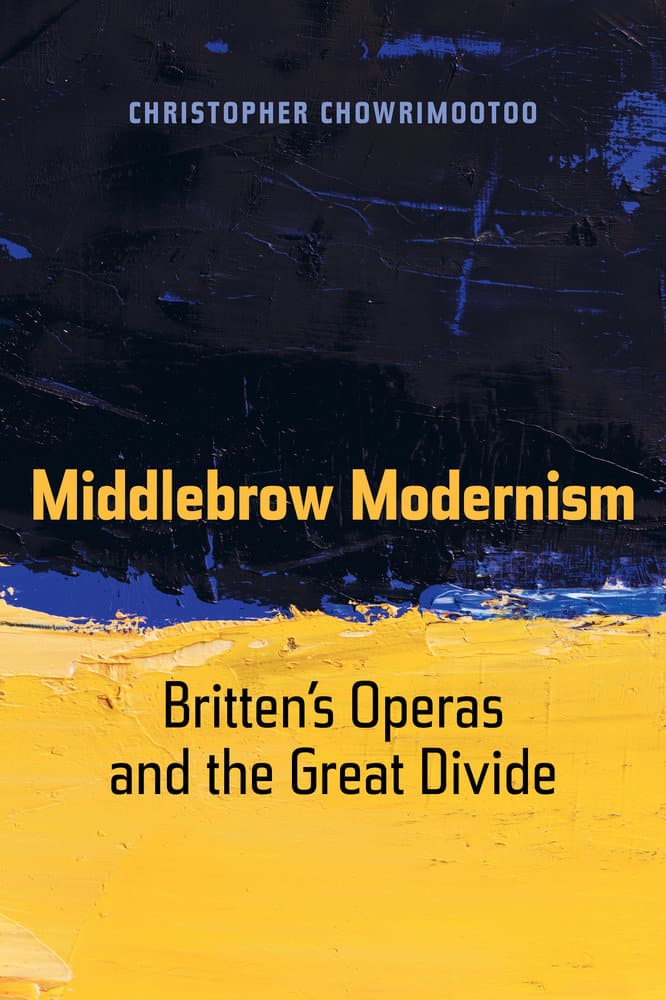 Although Britten’s operas are the focus of Middlebrow Modernism, it’s really about cultural categories and hierarchies. Like most academic books, it has some basis in my own experience. As a teenager, my first encounters with the world of “high” art music were propelled by the ideas of social aspiration and aesthetic elevation that have long underpinned cultural hierarchies. But I could never resist the less dignified, guilty musical pleasures I was supposed to have forsworn — like losing myself in operatic romance or reveling in a rollicking tune. The whole value system seemed precarious, if not crude. My academic training only complicated matters: originally invested in these cultural hierarchies, musicology had largely thrown them out, because they were also implicated in classist, chauvinist and racist prejudices.

This doubleness — the sense of being both invested in a value system and aware of its contingency — is central to my book. It is full of now-unfashionable oppositions: between high and low, sentimentality and realism, abstraction and immediacy. Like most young scholars, I’m committed to breaking down these boundaries. But the book grew from dissatisfaction about how this had been done. Critiquing old categories has done a lot to expose societal prejudices, but it can often lead to overwriting historical values with our own. At the same time, it can give a crude impression of the way hierarchies actually worked, making them seem more absolute than they were. More significantly, it risks exacerbating scholarly elitism, because many of the old cultural distinctions that musicologists quickly dismiss still frame public conceptions of musical value.

My goal was to delve into the working of these categories in their mid-twentieth-century heyday, balancing historical objectives with the impulse to critique. The “middlebrow” struck me as an ideal lens. It originated in the interwar period as a kind of anti-categorical category, describing those who blurred the boundaries between high and low. Britten’s operas became a lightning rod for this “middlebrow” ambivalence, because of the composer’s own divided loyalties — to uncompromising originality and difficulty on the one hand, and to communicating with a new mass audience on the other. Middlebrow Modernism takes this ambivalence seriously, excavating the creative ways that composers and critics negotiated contradictory ideals. While my book remains rooted in Britten’s own context, I like to think it has contemporary relevance, offering insight into our own conflicted investments, values, and prejudices even today.

A free ebook version of Middlebrow Modernism is available through our open access program, Luminos. A paperback version is available for purchase.

America the Bully: What the Trump Administration Memo on Gender Means for Trans Kids
The Eoan Group and Opera in the Age of Apartheid

The Eoan Group and Opera in the Age of Apartheid