Fire in California’s Ecosystems, Second Edition, Revised, edited by Jan W. van Wagtendonk, Neil G. Sugihara, Scott L. Stephens, Andrea E. Thode, Kevin E. Shaffer, and Jo Ann Fites-Kaufman, describes fire in detail—both as an integral natural process in the California landscape and as a growing threat to urban and suburban developments in the state. Written by many of the foremost authorities on the subject, this comprehensive volume is an ideal authoritative reference tool and the foremost synthesis of knowledge on the science, ecology, and management of fire in California. This second edition released in June 2018 includes critical scientific and management updates and four new chapters on fire weather, fire regimes, climate change, and social dynamics.

Read an excerpt taken from Fire in California’s Ecosystems below: 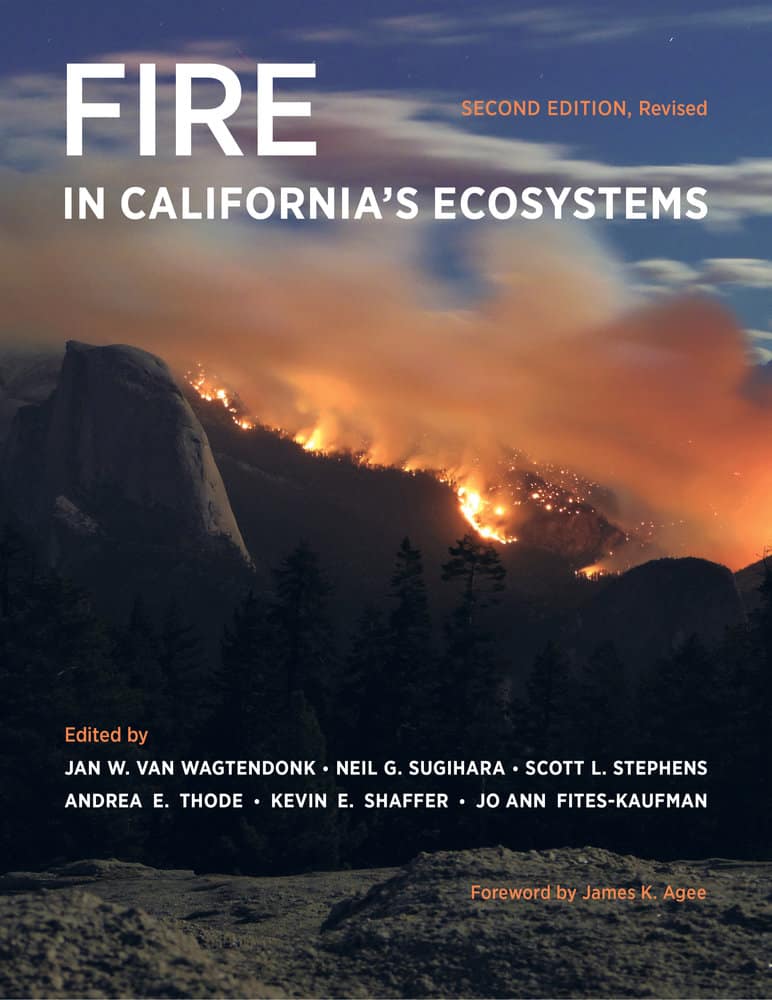 Fire is a vital, dynamic force of nature in California’s ecosystems and shapes the composition and structure of its vegetation. For millennia, human interaction with fire has developed simultaneously around our need to protect ourselves from its harm and the opportunity to use it as a natural resource management tool. As we become more aware of what influences and controls fire, we are gaining an appreciation of the contribution that fire makes to ecosystem complexity and biological diversity. Previous notions that we can, and should, suppress all wildfires to provide for human safety and protect ecological resources are giving way to the realization that we don’t have the ability to completely exclude fire, and that many valued attributes of California’s ecosystems shouldn’t be protected from fire, but actually require fire. To meet both protection and ecological objectives, we must manage wildland fire and adapt our own behavior to coexist with fire. Managing wildland fire is certainly one of the largest and most complex ecosystem management and restoration efforts ever undertaken, and understanding fire and the consequences of its patterns of occurrence and exclusion is essential. This complexity was underscored during the fall of 2017 when over 200,000 ha (500,000 ac) burned, over 9,000 structures destroyed, and over 40 people killed. These fires were driven by high winds under extremely hot and dry conditions into a mixture of development and wildlands.

Much of California has a Mediterranean climate conducive to fire, with long dry summers and periods of thunderstorms, low relative humidity, and strong winds. These patterns vary through an extremely wide range of climatic zones and complex topography.

Fire is a physical process, and both its direct and indirect effects are vitally important ecological processes. The heat it produces, the rate at which it spreads, and the effects it has on other ecosystem components are all part of that physical process. Human communities, watersheds, soils, air, plants, and animals are affected in one way or another by fire. Water quality and quantity, soil erosion, smoke, and plant and animal mortality are some of the more obvious effects. Other ecosystem effects are less obvious, but perhaps even more important. During the periods between fires, dead biomass accumulates in Mediterranean ecosystems because weather conditions are favorable for growth, but decomposition is active for only a relatively short moist part of the year. Fire complements decomposition in these systems by periodically removing debris through combustion. Fire has a differential effect on plant species mortality and regeneration, allowing those that are best adapted to fire to be perpetuated.

Pyrogenic vegetation has evolved with recurring fire and includes species that tolerate or even require fire in order to complete their life cycles. There is a continuous feedback loop between fire and vegetation. Fire feeds on vegetation as fuel and cannot reoccur without some minimum burnable, continuous biomass; and the vegetation cannot maintain its occupation of a site without recurring fire. Fire and vegetation are often so interactive that they can scarcely be considered separately from each other. Indeed, for a plant species to persist, the attributes of any fire regime—its seasonality, return interval, size, spatial complexity, intensity, severity, and type—elicit specific responses. We consider fire regimes and vegetation types to be mutually dependent with changes to either, facilitating changes to the other.

In California, animal populations and communities have developed in habitats where fire has been a primary dynamic process. The distribution of most animal species on landscapes has been driven by the patterns of fire and vegetation; controlled by climate, weather, and topography, over space and time. Perpetuation of California’s biological diversity certainly requires fire to be present as a vital ecological process.

It is difficult to overstate the ecological importance of fire in California’s ecosystems. A central theme to this book is that wildfire is a pervasive, natural, environmental factor throughout much of the state, and ignoring its role in ecosystems will seriously limit our ability to manage wildlands in a sustainable, ecologically appropriate, and responsible manner. To better understand the role of fire in California, it is useful to examine the evolution of its vegetation.