Steven Fradkin is a coastal ecologist and limnologist working at Lake Crescent Laboratory in Washington state’s Olympic National Park. He is co-author, with Jonathan Jones and Uta Passow (both at University of California, Santa Barbara), of “Characterizing the vulnerability of intertidal organisms in Olympic National Park to ocean acidification,” which recently published in UC Press’s open access journal Elementa: Science of the Anthropocene.

Steven Fradkin: Olympic National Park is a very special place. With over 90 miles of intertidal coastline, it is the longest stretch of congressionally designated wilderness coast in the lower 48 states. The Olympic coast is a biodiversity hotspot, with one of the highest diversities of marine invertebrates and seaweeds on the west coast of North America. Over 700 species of these organisms can be found on our shores in addition to over 65 species of fish. Relative to the California and Oregon coasts, this coastline is remarkably remote. No formal through-trail runs along it and no road runs adjacent to approximately 75% of the coast. As such, the shoreline of Olympic National Park is largely free of the development pressures and impacts found elsewhere on the shoreline of the conterminous United States. This relatively pristine coast allows us to examine the effect of broader, more global stressors, such as ocean acidification, on its intertidal communities. It also serves as a benchmark for comparison with other more developed shorelines.

UC Press: You note in your article that ocean acidification is rising. Why is that a problem?

Steven Fradkin: Increased ocean acidification is a problem for the Olympic coast and its intertidal communities. The majority of the species present in the intertidal zone, particularly the dominant space occupiers such as barnacle and mussels, are susceptible to ocean acidification impacts. Organisms that make shells out of calcium carbonate will have a harder time making the critical juvenile shell and maintaining shell thickness as adults due to the increased corrosiveness of more acidic waters. Recruitment failure of juveniles and adult mortality will increase. We have already observed some of these impacts in oyster aquaculture in the Pacific Northwest. In the diverse intertidal communities of Olympic National Park, increased ocean acidification has the potential to fundamentally alter how our intertidal zone looks and functions.

UC Press: What is causing this rise in ocean acidification?

Steven Fradkin: The rise in ocean acidification is inexorably linked to the rise in atmospheric concentrations of carbon dioxide resulting from the increased burning of fossil fuels since the dawn of the industrial revolution. Atmospheric carbon dioxide diffuses into seawater, forming carbonic acid that reduces seawater pH. Ocean acidification is further exacerbated by increases in freshwater runoff and nutrient enrichment. Freshwater has a lower pH than seawater, so increased freshwater inputs decrease seawater pH. Nutrient enrichment spurs rapid blooms of marine algae that produce carbon dioxide when they are decomposed by bacteria. In the Pacific Northwest, seasonal wind-driven upwelling of deep, carbon dioxide rich water along the coast also increases ocean acidification.

UC Press: Given these long-term trends, what do you think the future holds?

UC Press: How does one go about measuring the impact of these lower pH waters on intertidal organisms in Olympic National Park?

Steven Fradkin: To assess the vulnerability of Olympic intertidal organisms to ocean acidification, we adapted a previously developed methodology based on the sensitivity of a host of organisms in the broader California Current ecosystem derived from a database of natural and laboratory experiments (Busch and McElhany 2016). Our adapted methodology incorporated a unique feature of the intertidal zone: the varying degrees of exposure to seawater depending upon the tidal elevation where various taxa live. Where species-level experimental information did not exist, we used data from higher taxonomic levels as proxies for species-level information. Our approach, and the methodology it is based on, can be used to assess the vulnerability of organisms in other marine systems. As time goes on and more experimental work is done on organisms, this methodology will grow more robust. From this type of work, we and others can make predictions about which species will be winners and losers in an age of increasing ocean acidification.

Elementa: Science of the Anthropocene is a trans-disciplinary, open-access journal committed to the facilitation of collaborative, peer-reviewed research. With the ultimate objective of accelerating scientific solutions to the challenges presented by this era of human impact, Elementa is uniquely structured into six distinct knowledge domains, and gives authors the opportunity to publish in one or multiple domains, helping them to present their research and commentary to interested readers from disciplines related to their own. 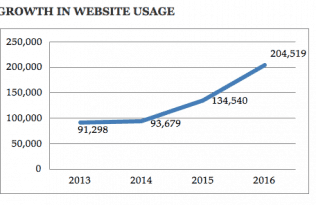 Open Science for Public Good: Elementa by the Numbers