Hanging in the UC Press offices in Oakland, CA is a broadside that was designed by Bay Area architect, designer, and artist Ernest Born and printed to celebrate the acquisition, renovation, and dedication of the headquarters building—then in Berkeley—for the Press in the year of our ninetieth anniversary (UC Press was located at 2120 Berkeley Way for 30 years). This is the first of five hundred signed and numbered letterpress copies, which include a transcription from Beatrice Warde and note from Albert Sperisen. Noted for a lifetime of service and work on behalf of typography, Warde is perhaps most remembered for the text of her inspired inscription below published in 1932. 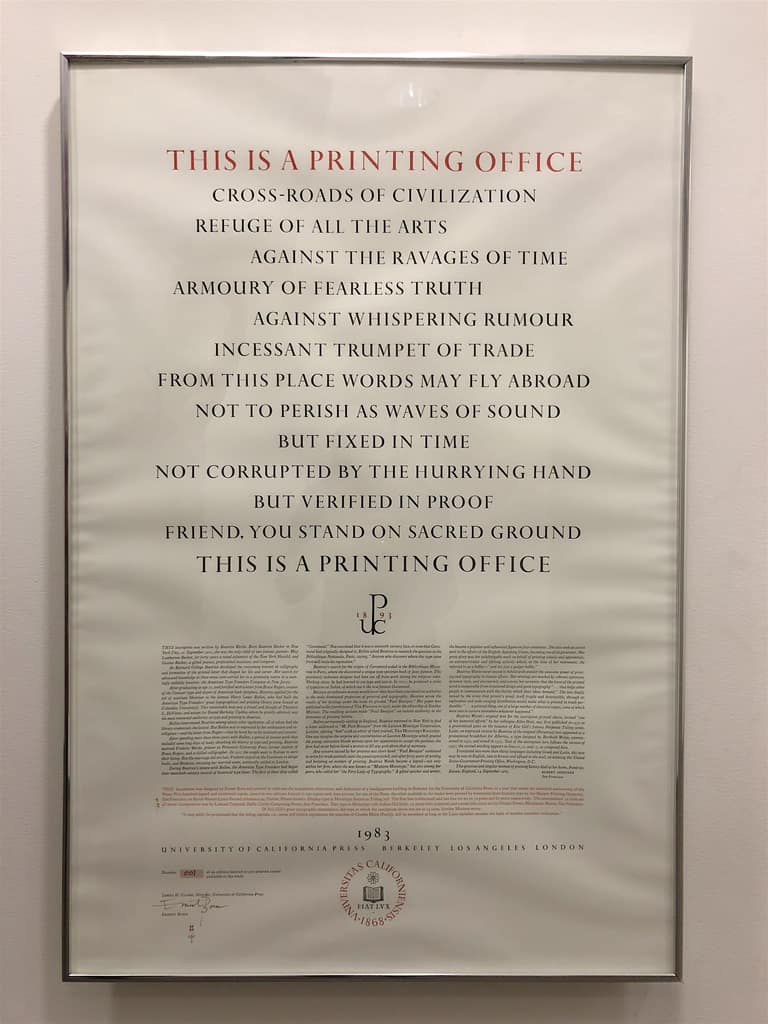 This is a printing office
Cross-roads of civilization
Refuge of all arts
Against the ravages of time
Armoury of fearless truth
Against whispering rumour
Incessant trumpet of trade
From this place words may fly abroad
Not to perish as waves of sound
But fried in time
Not corrupted by the hurrying hand
But verified in proof
Friend, you stand on sacred ground
This is a printing office

THIS inscription was written by Beatrice Warde. Born Beatrice Becker in New York City, 20 September 1900, she was the only child of two famous parents: May Lamberton Becker, for forty years a noted columnist of the New York Herald, and Gustav Becker, a gifted pianist, professional musician, and composer.

At Barnard College Beatrice developed the consuming interest in calligraphy and formation of the printed letter that shaped her life and career. Her search for advanced knowledge in these areas soon carried her to a promising source in a seemingly unlikely location: the American Type Founders Company in New Jersey.

After graduating at age 21, and fortified with a letter from Bruce Rogers, creator of the Centaur type and doyen of American book designers, Beatrice applied for the job of assistant librarian to the famous Henry Lewis Bullen, who had built the American Type Founders’ great typographical and printing library (now housed at Columbia University). This remarkable man was a friend and disciple of Theodore L. DeVinne, and except for Daniel Berkeley Updike, whom her greatly admired, was the most renowned authority on type and printing in America.

Bullen interviewed Beatrice among ninety other applicants, all of who had the library credentials she lacked. But Bullen was so impressed by her enthusiasm and intelligence—and the letter from Rogers, that he hired her as his assistant and curator.
After spending more than three years with Bullen, a period of intense work that included some long days of study absorbing the history of type and printing, Beatrice married Frederic Warde, printer at Princeton University Press, former student of Bruce Rogers, and a skilled calligrapher. In 1925 the couple went to Europe to earn their living. But the marriage did not last. Frederic stayed on the Continent to design books, and Beatrice, retaining her married name, eventually settled in London.

During Beatrice’s tenure with Bullen, the American Type Founders had begun their twentieth-century revival of historical type faces. The first of these they called “Garamond.” Not convinced that it was a sixteenth-century face, or even that Garamond had originally designed it, Bullen asked Beatrice to research the question in the Bibliotheque Nationale, Paris, saying, “Anymore who discovers where this type came from will make his reputation.”

Beatrice’s search for the origins of Garamond ended in the Bibliotheque Mazarine in paris, where she discovered a unique type specimen book of Jean Jannon. This previously unknown designer had been cut off from work during the religious wars. Working alone, he had learned to cut type and cast it. In 1621, he produced a series of typefaces at Sedan, of which one is the now famous Garamond.

Because an unknown woman would never then have been considered a authority in the male-dominated profession of printing and typography, Beatrice wrote the results of her finding under the nom de plume “Paul Beaujon.” Her paper was published in the fourth issue of The Fleuron in 1928, under the editorship of Stanley Morison. The resulting acclaim made “Paul Beaujon” an instant authority in the literature of printing history.
Before permanently settling in England, Beatrice returned to New York to find a letter addressed to “M. Paul Beaujon” from the Lanston Monotype Corporation, London, offering “him” a job as editor of the journal, The Monotype Recorder. One can imagine the surprise and consternation at Lanston Monotype which greeted the young, attractive blonde woman upon her appearance to accept the position; the firm had never before hired a woman to fill any post above that of secretary.

Any concern caused by her presence was short-lived. “Paul Beaujon” continued to write for trade journals until the pseudonym faded, and after forty years of writing and lecturing on matters of printing, Beatrice Warde became a legend—not only within her firm, where she was known as “Madame Monotype,” but also among her peers, who called her “the First Lady of Typography.” A gifted speaker and writer, she became a popular and influential figure on four continents. She also took an active part in the affairs of the English-Speaking Union, becoming one of its governors. Her great glory was her indefatigable work on behalf of printing schools and apprentices, an extracurricular and lifelong activity which, at the time of her retirement, she referred to as a hobby—“and not just a gadget hobby.”

Beatrice Warde never ceased to behold with wonder the awesome power of printing and typography in human affairs. Her writtings are marked with vibrant optimism, dynamic style, and discreet wit, and convey her certainty that the force of the printed word is inseparable from structured design and good typography “ . . . that helps other people to communicate with the clarity which their ideas demand.” She was deeply moved by the irony that printer’s proof, itself fragile and destructible, through its replication and wide-ranging distribution would make what is printed in truth perdurable:“. . . a printed thing, one of a large number of identical copies, some of which were sure to survive somewhere whatever happened.”

Beatrice Warde’s original text for the inscription printed above, termed “one of her immortal efforts” by her colleague Allen Hutt, was first published in 1932 as a promotional piece on the issuance of Eric Gill’s famous Perpetua Titling series. Later, an improved version by Beatrice of the original (Perpetua) text appeared as a promotional boardsheet for Albertus, a type designed by Berthol Wolpe, commissioned in 1932, and issues in 1935. Text of the inscription here follows the version of 1935; the revised wording appears in lines 10, 11 and 12, as composed here.

Translated into more than thirty languages including Greek and Latin, this text may be seen in English, Cast in bronze and affixed to the wall, on entering the United States Government Printing Office, Washington, D. C.

This gracious and singular woman of printing history died at her home, Pomfrets, Sussex, England, 14 September 1969.

On the occasion of our 125th anniversary, we reflect not only on the Press’s milestones and illustrious publishing history but also look ahead to see the work to be done, true to our mission. Throughout the year, join us in celebrating this landmark occasion—one that bolsters our commitment to driving progressive change by seeking out and cultivating the brightest minds. Follow along on social media: #UCP125

On the Occasion of Our Quasquicentennial — #UCP125