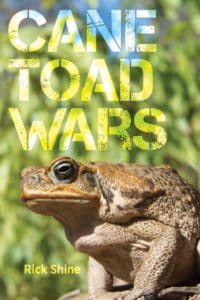 Every town has its rituals, but some are stranger than others. Every year on March 29th, the citizens of Townsville in northeastern Australia gather at local parks in the evening, equipped with gloves and buckets. Their aim is to collect and kill as many invasive Cane Toads as they can find.

The tradition began in 2009, inspired by an episode of the TV show The Simpsons entitled “Whacking Day.“ The survival of this bizarre custom is due partly to a concern from the general public to do something – anything – about environmental problems. But mostly, the activity continues because it’s fun. In Australian society where hunting is politically incorrect, targeting an invasive species (in the name of conservation) provides a guilt-free opportunity for legal hunting of wildlife.

Cane Toads are the perfect quarry for the families of Townsville. Small, squat, slow and unable to bite or scratch their captor, a Cane Toad can be captured by even a small child. The toad possesses potent poisons that it can deploy against an aggressor, but a sturdy pair of gloves removes any risk.

One is humane treatment of the animals involved. An individual Cane Toad hopping along a country road bears no personal responsibility for the environmental mayhem that its species has inflicted on native wildlife. Toads didn’t ask to be brought to Australia in 1935; any blame surely attaches to the sugar-cane industry that brought them in, not the toads. So if we decide to cull Cane Toads, we need to do it humanely. Fortunately, that’s easy to achieve. The toads can be popped into a refrigerator for a few hours (inside a plastic bag) to cool down before being transferred to the freezer for transformation into a toadsicle. It’s painless.

The other issue is more difficult to resolve. Does culling toads achieve any gains for conservation? First, any impact of toad removal is short-term. A female toad can produce 30,000 eggs in a single clutch, so the invaders can replace themselves faster than even a toad-culling army could remove them. And second, Cane Toads don’t have much environmental impact in areas where they have been present for decades, such as the Townsville region. The invading amphibians fatally poison thousands of native predators when they first arrive in an area, but it’s a short-term massacre. Within a few months, the local marsupials, snakes, lizards and crocodiles either have been killed, or have learned not to eat the toxic newcomers.

So, splashing around in gumboots picking up toads achieves more for personal entertainment than it does for biodiversity conservation. But on the other hand, the event stimulates families to get up off the sofa and out into the national park, and educates them about the perils of invasive species. In a world where the younger generation is increasingly addicted to smartphones rather than the natural world, maybe that’s not such a bad thing.