You have an extensive background in publishing and the industry, as an Editor, an Author, an Editorial Director, and now an Executive Director. What are you excited to bring to UC Press as you shepherd the organization through its next phase?

Job one is to fulfill the mission of the press, broadly conceived. Our formal mission is “To drive progressive change by seeking out and cultivating the brightest minds and giving them voice, reach, and impact,” but I prefer to think that our job is to make as big a a progressive shaped dent in the world as we can given the tools at our disposal. Everything else flows from that – who we publish, what we publish, and how we publish. I think being “progressive” can encompass everything from the fact that we’re still actively publishing humanities monographs to our open access programs to the way our criminal justice and sociology programs are constructed. I’m tremendously excited to be a part of taking that vision forward.

Second is a focus on publishing fundamentals: the basic detail-oriented blocking and tackling that is necessary to get great ideas into the world, whatever form they take. UC Press has great fundamentals, but creating the space where we can take a breath and think and talk about our books more is part of my job.

Third is the chance to experiment. We’re clearly in a time of great changes in communication in general and scholarly communication in particular. We don’t know where it’s going to go, but we are charged with figuring out how to observe weak signals, test new models, and learn how to proceed through careful and rigorous experimentation. Exploring and developing new models – open access and others – must go hand in hand with the basics of great publishing.

At this point in time, what qualities do you see that differentiates UC Press from other university presses/publishers in general?

Well, we can go back to the mission. There are few scholarly publishers that embrace a mission like ours so explicitly – that’s important for its moral and ethical weight, I think, but for its strategic possibilities. Differentiation is the path to long-term success. Being best in class by doing the same thing as everyone else is tough to pull off; logically, it’s impossible for everyone to be best-in-class. But doing something that’s meaningfully different, that plays to our strengths, and respects our authors and readers – those seems necessary to me. As part of that differentiation I would include our location: within the largest public university system in the world, and in California. Those both set us apart from the rest of the field.

What do you see on the horizon for UC Press?

Great publishing in its many manifestations – at least as I’ve laid it out above.

What do you think UC Press will look like in 125 years from now?

I have no idea. I don’t think that University of California President Martin Kellogg, who endowed the press in 1893, could have imagined the changes that the publishing industry and the press have undergone in the last 125 years. I hope that he would be impressed by the quality of what we do and how we’ve responded to the changes we’ve witnessed and participated in. The press already looks radically different than it did 25 years ago.

Yet the folio form of the book has survived for hundreds of years. Given the fact that it’s a great container for knowledge and argumentation  – I’m tempted to say a perfect one – I kind of think it will still be going strong. But given the changes that digital communication has wrought broadly on media business models and scholarly research, I’m sure we’ll have lots of new ways of connecting our authors with their readers. What those will look like, I’m not sure. It is incumbent on us to figure it out.

What I feel completely sure about is that the press will still be full of dedicated staff who want to make a difference in the world.

What are your favorite UC Press books?

That’s like asking me to choose among my children.

What would your dream job be if you didn’t work in publishing?

John Lane founded The Bodley Head, a UK publishing house, in the 1880s. (He was the uncle of Allen Lane, one of the founders of Penguin.) He named the firm after a bust of Sir Thomas Bodley, the founder of Oxford’s Bodleian Library, that appeared above the door to the shop. In the introduction to one of Bodley’s book that he was reprinting, he wrote, “I have always been in doubt whether the writing of a great book or the capacity to  appreciate it were the finest thing in the world; but I am convinced that next in importance after the writing and the appreciating is the publishing of it.” I second the notion, and I have no idea what would come in fourth.

The Violent Legacies of the U.S. War in Vietnam
Spielberg’s Film The Post : Epic Tale of Press Freedoms Prevailing Over Government Censorship 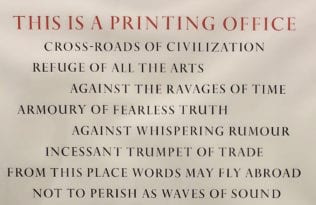 UC Press at 125 Years: This Is a Printing Office