This guest post is published around the American Society for Environmental History conference in Riverside, occurring March 14-18, 2018. #ASEH2018

By Chad Montrie, author of The Myth of Silent Spring: Rethinking the Origins of American Environmentalism 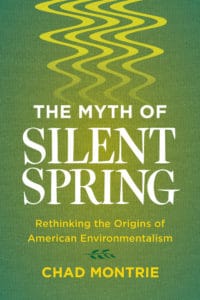 Born to a family line of West Virginia coal miners and union activists in 1923, Arnold Miller quit school and went to work digging coal when he was only 14 years old. Toward the end of World War II he volunteered for the United States Army and trained as a machine-gunner. He was severely wounded in the Normandy invasion but eventually returned home and went back to the mines. After breathing coal dust for decades he developed symptoms of what became known as “black lung.” Facing a corrupt and recalcitrant union leadership, he helped lead a dissident movement to hold coal operators responsible for the disease. After an unsanctioned statewide “wildcat” strike in 1968, the West Virginia legislature finally passed a black lung bill and the next year the federal government passed the Coal Mine Safety and Health Act, followed by the Occupational Health and Safety Act in 1970.

As the “black lung” campaign was going on, Arnold Miller and his fellow deep miners also supported a growing movement to ban surface coal mining. They were concerned with the impact that “stripping” had on the region’s economy, since its efficiency put miners out of work, as well as the ways it ravaged the land and polluted water. Protest had begun long before, dating back at least to the 1930s, and it became intensely militant overtime. By the mid-1960s, activists were resorting to nonviolent civil disobedience (blocking haul roads and bulldozers) and even industrial sabotage (shooting at bulldozer operators and blowing up mine machinery). As a result of this militancy, more and more members of Congress were signing on to an abolition bill introduced by West Virginia representative Ken Hechler. Miller aided that effort by rallying coalfield residents in his home state as well as traveling to Washington, D.C., to offer testimony. He also headed a slate of reform candidates in the 1972 United Mine Workers elections and became president of the union.

Today, unfortunately, few environmental historians or environmental activists know anything about Arnold Miller or the decades-long campaign to end surface coal mining. This is due largely to the way they understand the origins of American environmentalism. By the standard interpretation, the movement started in 1962, with the publication of Rachel Carson’s Silent Spring, and it was rooted in a receptive suburban middle-class motivated by newfound concerns with quality of life. There is no room in this ‘big book’ origin story for the likes of Arnold Miller and other hard-pressed people living in the Appalachian coalfields, people moved to activism because daily circumstances forced it on them. They do not fit the prototypical definition of “environmentalist.” The Myth of Silent Spring tells their story, as well as the stories of countless others, recovering a new narrative about environmentalism in the past “from the bottom up.”

The Violent Legacies of the U.S. War in Vietnam
Opportunities to Connect with Feminist Media Histories at #SCMS18