UCPress.edu
Stay informed: Sign up for eNews Subscribe
by Oliver Wang and Diane Pecknold, editors of the Journal of Popular Music Studies
UC Press is pleased to welcome the Journal of Popular Music Studies (JPMS) to the list of journals we publish. JPMS, the official journal of the International Association for the Study of Popular Music, U.S. chapter (IASPM-US), will publish its first issue with UC Press in July. As the IASPM-US 2018 Conference convenes this week in Nashville, we asked JPMS’s editors Oliver Wang and Diane Pecknold to talk about what they are looking forward to as the journal transitions to its new publisher. #iaspmus2018 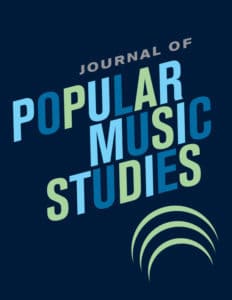 In bringing the Journal of Popular Music Studies (JPMS) over to UC Press, one of the things we’re especially looking forward to is the ability to broaden both the content and audience for the journal by including writing beyond just peer-reviewed academic articles. We remain committed to publishing the latter, as we always have, but we would also like to follow the lead of entities such as IAPSM-US and the annual Pop Conference in Seattle to embrace other forms of popular music content, be it music reviews, roundtable discussions, and essays by pop music researchers outside of conventional academic circles. To that degree, we’ve been inspired by UC Press’s long tradition with trade journals such as Gastronomica and Film Quarterly, both of which have found a strong balance in the kind of writing they publish.

Popular Music Studies has undergone tremendous change over the past 30 years and I don’t think it’s an exaggeration to suggest that, not that long ago, this kind of work hadn’t been fully embraced in more traditional disciplines. However, as popular culture research, in general, has become seen as more and more central to any understanding of societies around the world, both historically and in the current moment, there are few subject areas more vital than pop music. It serves as an identity beacon, as the social glue that creates/holds communities together, as the terrain upon which class/race/gender/etc. tensions are engaged and tussled over. Exploring these issues have always been the focus of our journal and we look to only grow the scope of our content with our new publishing partner.

UC Press at SCMS in Toronto
In Germany, the Role of Family in Recruiting Members into Neo-Nazi Groups