By Sunaina Maira, author of Boycott!: The Academy and Justice for Palestine

On December 19, 2017, sixteen-year old Ahed Tamimi slapped Israeli soldiers who had invaded her home in the West Bank. The slap by this Palestinian teenage girl resounded around the world. Tamimi was confronting the soldiers hours after they had shot her teenage cousin, Mohamed, with rubber bullets that broke his jaw and entered his skull. Tamimi has been fending off Israeli soldiers all of her young life. In 2015, she became famous when a video, that went viral, showed her wrestling a masked Israeli soldier with her bare arms while he throttled her little brother who had a broken arm. Mohamed Tamimi was violently attacked while protesting against Trump’s decision to move the capital of Israel to Jerusalem, a city under illegal Israeli military occupation since 1967. Trump’s unilateral move, in defiance of the international consensus that recognizes that the status of Jerusalem is still contested due to the occupation, sparked widespread protests by Palestinians that included general strikes. Colleges and schools also closed as part of acts of collective rejection of this blow to Palestinian sovereignty.

The Tamimi family’s village, Nabi Saleh, is renowned for the ongoing, regular, nonviolent resistance of its Palestinian residents to Israel’s confiscation of its land and its water and the illegal construction of Jewish-only settlements that encroach on the village. Palestinian resistance to five decades of occupation has included countless such acts of civil disobedience and nonviolent protest, including general strikes, hunger strikes by Palestinian prisoners, and peaceful actions against land confiscation, home demolitions, and enclosure by militarized borders and the Israeli Wall. Nabi Saleh is not the only village where unarmed men, women, and children, like Tamimi and her family members, routinely confront Israeli soldiers with lethal weapons and are routinely maimed, killed, and arrested without trial. Israeli military laws criminalize peaceful political protests, including even waving Palestinian flags, and Ahed’s father, Bassem Tamimi, has been in prison and tortured for many years.

Other West Bank villages such as Ni’lin and Bil’in also have a history of civil disobedience challenging the occupation and colonization of their land, based on the Palestinian concept of sumud, or steadfastness, a notion that evokes the indigenous attachment to staying on and defending the land. This notion of resilience is also at the core of international solidarity with the Palestinian refusal to accept the rule of the occupier and challenge the denial of their right to be human. International volunteers regularly attend the Friday protests against the Wall and settlements in West Bank villages and have also been tear gassed and attacked by Israeli soldiers.

The arrest of Tamimi sparked an international solidarity campaign, #FreeAhedTamimi, to bring attention to her conviction as a “terrorist” by an Israeli military court and the arrests and physical assaults of her family members. The feminist peace organization, Code Pink, organized a campaign to send letters to Tamimi on her 17th birthday, which she celebrated while in Israeli prison; the campaign aims to challenge the systematic detention and torture of Palestinian children in violation of the Convention on the Rights of the Child, which is finally being opposed by legislation introduced in Congress in winter 2017. While it is highly unlikely that this law will ever be passed by a consistently pro-Israel U.S. legislature, it is important to note that Israel is the only country in the world that systematically detains and prosecutes children-as well as adults–in a military court system that lacks due process (the system of “administrative detention”). Hundreds of children are locked up every year simply for throwing stones—against the tanks of an occupying army and soldiers with lethal weapons. Addameer, a prisoner rights organization, reports that the number of child prisoners has actually doubled over the past 3 years, also noting that approximately 20% of the Palestinian population in the occupied territoriees has been in Israeli prisons (and 40% of all men) since the occupation began in 1967; this is why Israel is called a carceral state. Palestinian children are regularly tortured in prison; Defence of Children-International found that 75% of Palestinian children are physically abused after arrest.

Furthermore, Israeli soldiers regularly use rubber bullets, as they did against Mohammed Tamimi, as a “crowd control” weapon targeting Palestinian protesters and disabling and killing children, as documented by Israeli human rights organization B’Tselem. In places such as Nabi Saleh and other sites of organized collective resistance, documented by harrowing documentary films such as Five Broken Cameras, Bil’in Habibti, and Budrus, the use of such lethal weapons against children is a form of collective punishment against family members of those involved in political activism. It should be noted that just in January 2018, four Palestinian children—who were all 16 years old—were killed by Israeli soldiers in West Bank protests or “ambushes” by Israeli soldiers, who regularly shoot Palestinian youth in the head with live ammunition.

Ahed Tamimi, interestingly, is blond and light-skinned—as are some Palestinians—and one of the troubling tactics that Israeli officials have used to discredit her after she garnered global media attention is to allege that, because of her fair complexion and blond hair, she is not really a Tamimi family member. This reveals the racist and colonialist logics underlying the Zionist regime, that is, Palestinians, especially women, are not capable of courageous acts of resistance and if they are, are not authentic Palestinians – while crushing even the tiniest acts of resistance with brutal force. Some Israeli Zionists went even further in attacking Tamimi, suggesting that she should be subjected to rape and murder for daring to defy an Israeli soldier. 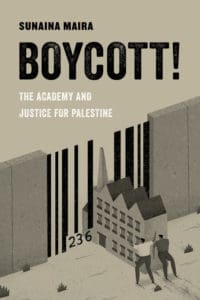 So what can those concerned about the horrific abuse of children and authoritarian repression of civil disobedience do in protest, here in the U.S.? Palestinians have told us, consistently, what we can do: they have called on international civil society to engage in engage in boycott, divestment, and sanctions till Israel complies with human rights law. The BDS movement calls on Israel to 1) end its occupation and colonization of Palestinian lands and dismantle the Wall; 2) respect the right of Palestinian citizens of Israel to full equality; and 3) protect and promotes the right of Palestinian refugees to return as upheld by UN Resolution 194.

As I discuss in my new book, Boycott! The Academy and Justice in Palestine, the academic boycott movement draws attention to this systemic degradation of academic (and human) freedom in Palestine and has been an incredibly effective and growing campaign in the U.S. academy in recent years, with boycott resolutions adopted by several national academic associations. It is also a movement that engages in joint struggles against xenophobia, militarization, border violence, police brutality, and carcerality and for justice, here and there.

Achieving the Afrofuturist Vision of Chocolate Cities
A Q&A with Heather Lukacs, program director at an environmental justice non-profit organization and coauthor of “Risk, Uncertainty, and Institutional Failure in the 2014 West Virginia Chemical Spill” 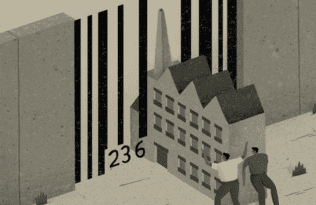 The Academy and the Boycott, Divestment, and Sanctions Movement