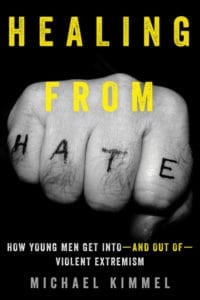 “It is always difficult to approach an historical event in hindsight.” —Michael Kimmel in Healing from Hate: How Young Men Get Into—and Out of—Violent Extremism

On this President’s Day, we look at the relationship between U.S. presidents and the people they work to serve. From immigration, to health care, to taxation, and many other issues, each sitting president’s viewpoint on various cultural and economic issues helped to shape social and public policy—as well as shape a president’s place in U.S. history.

One such issue of the day is violent extremism and the role that gender plays in its evolution. In Healing from Hate: How Young Men Get Into—and Out of—Violent Extremism, Michael Kimmel, sociologist and founder of the Center for the Study of Men and Masculinities at Stony Brook, shares how gender is inherently omitted from the lexicon of violent extremism:

During the entire conference, participants heard not one word about “masculinity.” (Indeed, the big controversy was whether President Obama sufficiently and specifically addressed Islamic terrorists.)

“We have to confront squarely and honestly the twisted ideologies that these terrorist groups use to incite people to violence,” Mr. Obama told the audience. A year earlier, Secretary Kerry had argued that countering terrorism should involve “better alternatives for a whole bunch of young people” and greater “opportunity for marginalized youth.” “People.” “Youth.”

But which “people” exactly? What “youth?” If we close our eyes and imagine those people, those young people, whom do we see? And what is their gender?

Kimmel sheds light on the basic—and most crucial—question: why do we ignore the impact of gender expectations when discussing violent extremism? He asks: “Who are these young men? What draws them to violent extremism? What are the ideologies that inspire them, the psychological predispositions that lead some and not others to sign up? What emotional bonds are forged and sustained through membership in violent extremist groups?”

The Obama administration may have overlooked the role of gender on violent extremism. The current Trump administration seemingly does the same, focusing on race over gender rather than recognizing their interplay:

According to a report from the New America Foundation, “Since the attacks on September 11, 2001, nearly twice as many Americans have been killed by non-Muslim extremists than by jihadists.” The Trump administration’s response was to insist that all references to “terrorism” have the words “radical Islamist” in front of it, and that all programs and projects designed to address domestic terrorism be scrapped.

Sadly, one of the organizations I discuss in this book was actually defunded by this new administration. Life After Hate, a North American organization dedicated to helping violent right-wing extremists get out of the movement, had been awarded a substantial grant over two years to develop a deradicalization program in the United States modeled on EXIT in Sweden. In late June, the Trump administration approved the funding of all the successful grant recipients—except those that addressed rightwing extremism or worked in Muslim communities. …

All across the landscape of what President Donald Trump has insisted be collectively called “radical Islamic terrorism,” there are significant differences in tactics and ideology, distinctions that may be too subtle for a blanket nationalist condemnation. But on gender issues, these disparate groups appear pretty similar: global economic conditions produce a “crisis” of masculinity, a new anxiety among men about their ability to claim their entitlement to be productive and respected workers in public and unquestioned patriarchs at home. With employment more precarious, their children gradually escaping complete parental control in schools, and their wives entering the marketplace, where they develop alternative poles around which their social lives might revolve, a sense of “aggrieved entitlement” grows within them, a sense of humiliation at not being enough of a “real man.”

As history continues to unfold on the role of gender on violent extremism in our world today, we remind ourselves that a president’s viewpoint is but one of many markers that influence the cultural discourse and social policy around this issue. And only history will tell which side we will land—on the side of intolerance or on the side of understanding.

A Dream Ends
Achieving the Afrofuturist Vision of Chocolate Cities