The latest issue of California History, guest edited by Leonard Schmieding (Georgetown University) and Shana Klein (Georgetown University), explores the surprisingly untold histories of San Francisco’s restaurant landscape in the twentieth century. The following is an excerpt from the guest editors’ introduction, which is freely available at ch.ucpress.edu, along with the rest of the issue, until February 21.

Since the Gold Rush, in 1849, San Francisco has always been known as a food city. In the beginning, San Franciscans imported canned goods from all over the globe in order to feed the population of gold miners, and soon after, local agriculture demonstrated that farmers could grow anything—bigger and better, as they were proud to brag, than anywhere else in the United States. With the completion of the transcontinental railway system, San Francisco could export its Northern Californian abundance to the rest of the country and established its great reputation as a culinary paradise. While San Francisco foodways reached the Midwest, the South, and the East Coast, its immigrant populations changed these foodways. For example, Italians, who controlled the city’s farmers markets and dominated the local agriculture during the late nineteenth and early twentieth centuries, exposed San Franciscans to a great variety of produce. Chinese played an important role in distributing the produce by buying large quantities at the markets and then carrying them up the steep hills of the city to sell them to residents who did not go down to the markets. Furthermore, immigrant chefs in hotels and restaurants started using seasonal produce for their dishes and coined the term San Francisco cuisine—with Austrian immigrant Victor Hirtzler, chef at the St. Francis Hotel, becoming most famous for his cookbook of California cuisine. A number of dishes like Crab Louie, Cioppino, and also various versions of Pacific abalone were thus made into San Francisco signature dishes.

One major component of San Francisco’s culinary signature could be found in the city’s bohemian culture, which in turn consisted of the desire to eat both cosmopolitan and affordable meals. In their quest for exotic and filling meals, bohemians like Clarence Edwords scoured the local landscape of restaurants and found them in French, Japanese, Chinese, German, Italian, and other ethnic eateries. In view of San Francisco’s reputation as a food city, as a home for bohemians, and as a cosmopolitan metropolis on the Pacific coast, the lack of food historical studies of the city’s restaurant landscape is surprising. This special issue therefore intends to shed more light on San Francisco’s German, Chinese, and Indian restaurants in the course of the twentieth century.

CALL FOR PAPERS: California History, the premier journal of historical writing on California and the West, invites papers for review and possible publication. Click here for more information about submitting your article.

Dive Deep into the Story of Jane Goodall in The Ghosts of Gombe
L.A. is Still the South

A History of Cookbooks: Recipes in Verse

A History of Cookbooks: American Cookbooks and National Identity 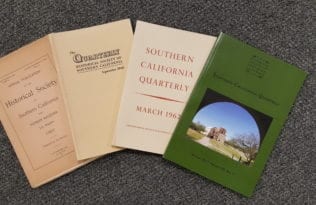