Chiura Obata was one of the most significant Japanese American artists of the twentieth century. Chiura Obata: An American Modern, is a major retrospective of his work with an extensive traveling schedule. Appropriately, its second stop is at the Utah Museum of Fine Arts (UMFA), where it will be on view through September 2, 2018.

The exhibition and accompanying catalogue feature more than 150 watercolors, paintings, prints, and screens, including images Obata produced during internment at the Topaz War Relocation Center, which is located sixteen miles from Delta, Utah. Many of these works have never been on public display.

Born in Okayama, Japan, Obata emigrated to the United States in 1903 and embarked on a seven-decade career that saw the enactment of anti-immigration laws and the mass incarceration of Japanese Americans during World War II. But Obata emerged as a leading figure in the Northern California artistic communities, serving not only as an influential art professor at UC Berkeley for nearly twenty years, but also as a founding director of art schools in the internment camps. With a prodigious and expansive oeuvre, Obata’s seemingly effortless mastery of, and productive engagement with, diverse techniques, styles, and traditions defy the dichotomous categorizations of American/European and Japanese/Asian art. His faith in the power of art, his devotion to preserving the myriad grandeur of what he called “Great Nature,” and his compelling personal story as an immigrant and an American are all as relevant to our contemporary moment as ever.

“Obata’s paintings of the western landscape and grandeur of nature are majestic. The energy of his compositions counters the stillness of his earlier ink drawings, the lines full of the potential for movement as if they are scenes in a stop-motion animation. In “Grand Canyon,” a 1940 watercolor on silk, Obata creates a contrast between red and blue to emphasis the canyon’s depth and horizon’s expanse. Unlike artists like Arthur Dove or even Georgia O’Keeffe, Obata’s landscape has a delicate touch that is concerned less with the boldness of its abstract shape than with the texture and impressiveness of the range.”—Hyperallergic

Read reviews of the exhibition in Hyperallergic, the International Examiner, and The Bottom Line, the University of California, Santa Barbara, newspaper. 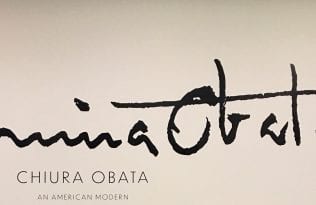 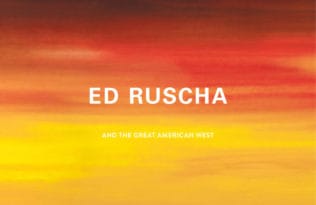