By Salim Tamari, author of The Great War and the Remaking of Palestine

As Israel celebrates, and the rest of the world condemns, Donald Trump’s declaration of U.S. recognition of Jerusalem as the capital of Israel, it is pertinent to recall on this issue Arthur Koestler’s famous quip, made a century ago in reference to the Balfour Declaration, that “one nation solemnly promised to a second nation the country of a third.”

Two unintended consequences emerge from the new U.S. position: first, it brings the status of Jerusalem back to the limelight, after it was pushed to the back burner by the Syrian and Yemeni wars; and second, it has clearly placed the United States outside of the international consensus with regard to any future peace process over the status of the city, or indeed within the Arab-Israeli conflict. This has opened the door to other global and regional actors, particularly Europe, Russia, and Turkey, as future mediators. In fact, some of the earliest responses to Trump’s declaration came from these quarters. Turkish prime minister Recep Tayyip Erdogan voiced the possibility of severing diplomatic relations with Israel, and French president Emmanuel Macron announced his total rejection of the “unilateral” U.S. move, which he described as “regrettable” and “against international law and all the resolutions of the UN Security Council.” German foreign minister Sigmar Gabriel described Trump’s decision as “counterproductive” to the peace process.

The debate over Jerusalem status happened when Palestinians were commemorating the thirtieth anniversary of the first intifada – which some observers will recall exploded over control over Jerusalem’s public space:

The battle for control over the streets of Jerusalem was the most protracted and perhaps due to the centrality of the city in the Israeli strategy of control over the territories, the most crucial. It was sparked by General Sharon’s transfer of his residence to the Old City of Jerusalem on December 14th, 1987, with the onset of the major demonstrations in Gaza. A commercial strike commenced in Jerusalem and continued unabated for forty-one days, igniting a series of solidarity strikes in other West Bank townships, most notably in Nablus and Ramallah.

Jerusalem was then, as it is today, the beginning and end of the intifada. The pacification of Jerusalem as an arena of rebellion during the 1990s did not last, despite Israel’s continuing efforts – including rezoning the city’s Arab periphery, residency regulations, and demographic policies of exclusion – to suppress its Palestinian Arab population and sever it from its Palestinian Arab milieu, for whom it lies at the heart of the question of independence.

Logistically, the U.S. decision brings back the thorny issue of the location for the prospective Jerusalem embassy. One of the likeliest places, it appears, remains the contested territory of the so-called Allenby Barracks, which was sequestered from Jerusalemite Arab Khalidi, ‘Alami, and Ansari families over the last half-century. However, this is a minor detail in a larger issue that concerns the future of the occupied territories and the status of Jerusalem as the capital of two sovereign states. Underlying the objections of the majority of countries, including the United States until recently (that is, until Trump’s election), to Israel control of Jerusalem has been UN General Assembly resolution 181, which affirmed the partition plan for Palestine and the creation of an international zone in Jerusalem known as the corpus separatum. That notion established in the city a special international regime in which both Palestinians and Israelis would have a dual national identity in the city. Given the slow death of the peace process and the de facto withdrawal of the United States from a mediating role, is it time – seventy years later – to revive this plan for Jerusalem? 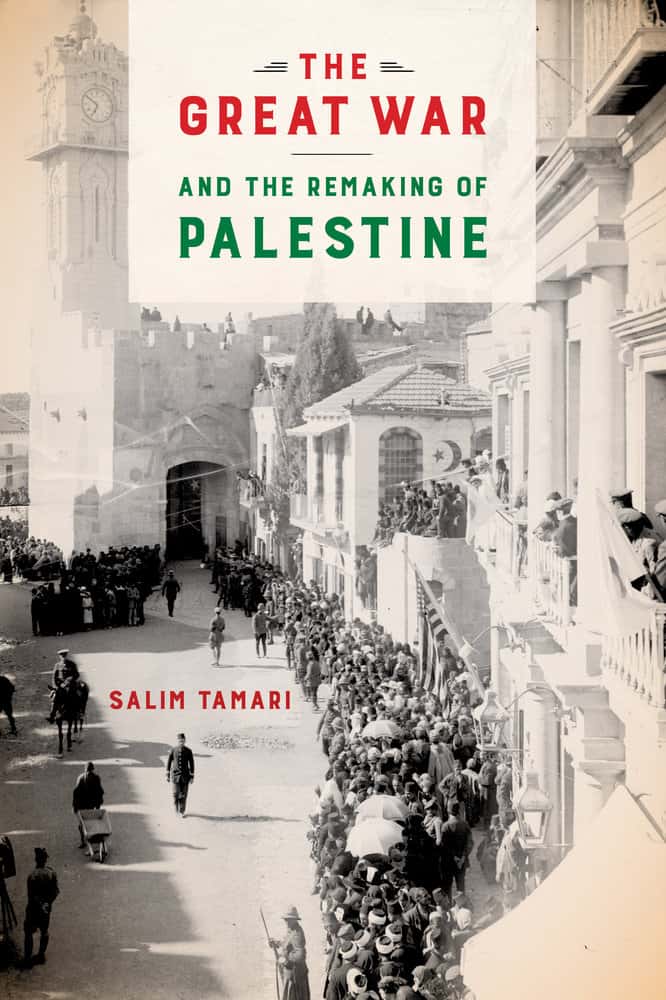 A leading expert on Jerusalem, Salim Tamari is Professor of Sociology at Birzeit University, Palestine, Director of the Institute of Jerusalem Studies, editor of the Jerusalem Quarterly, and author most recently of The Great War and the Remaking of Palestine.

Employing nuanced ethnography, rare autobiographies, and unpublished maps and photos, The Great War and the Remaking of Palestine discerns a self-consciously modern and secular Palestinian public sphere. New urban sensibilities, schools, monuments, public parks, railways, and roads catalyzed by the Great War and described in detail by Salim Tamari show a world that challenges the politically driven denial of the existence of Palestine as a geographic, cultural, political, and economic space.