The question at this historical moment is can we really engage in difficult work. By “difficult,” I mean the ethically and intellectually hard task of unpacking and confronting social regulations and exclusions in their various locations—in nation-states, in academic fields, and in communities. Historically, interdisciplinary fields have demonstrated a greater capacity for this difficult labor as they have been the ones to engender and demand the creation of languages for race, sexuality, gender, class, disability and so on, developing those languages so that various publics might engage social, political, and economic challenges.

For me, this is where interdisciplinary organizations like the American Studies Association and the American Studies Now book series join forces. In addition to producing the languages necessary to confront the social forces that have threatened the survival of various minoritized communities, it has been associations like the ASA that have mustered the courage to speak uncomfortable truths about the modes of violence arising from the state as well as from the regimes of race, gender, sexuality and class. Collectively, the interdisciplines—much more so than the disciplines—have assumed the crucial task of confronting domination. In a nation and a world that increasingly prohibits honest and critical encounters, interdisciplinary associations like the ASA are needed now more than ever, needed to produce intellectuals at all levels who will refuse to accept—as Edward Said put it—“the smooth, ever-so-accommodating confirmations of what the powerful or conventional have to say, and what they do. Not just passively unwilling, but actively willing to say so in public.”

The stakes of this commitment to critical articulations were made clear by the old woman in Toni Morrison’s 1993 Nobel address, the one who offers a lesson about the vital importance of language, the one who warned that yielding to the confirmations of the powerful could only lead to what she called “tongue-suicide.” This murder of critical thinking, she said, is “common among the infantile heads of state and power merchants whose evacuated language leaves them with no access to what is left of their human instincts, for they speak only to those who obey, or in order to force obedience.” In this moment, we need a network of cultures whose primary purpose is to studiously reactivate the deep and public obligations of critical intellection.

American Studies Now is poised to be an access point within this network of cultures. If the series is designed—as the editors argue—to “refuse the distinction between politics and culture,” then one of the of the ways in which it embodies that is by creating books written for undergraduate audiences, books designed to give undergraduates the tools to raise the level of social discussion. As such, American Studies Now participates in a larger interdisciplinary culture whose job is the creation of intellectual networks that can actively develop critical and imaginative publics within and outside our scholarly associations. 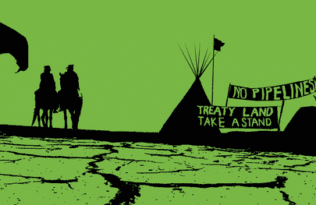 The Power of Speculative Fiction in Imagining the Future of Climate Change: Culture, Social Movements, and American Studies