This guest post is published in conjunction with the annual meetings of the Middle Eastern Studies Association in Washington, DC and the American Academy of Religion in Boston, MA, both taking place November 18-21. #MESA2017DC &  #AARSBL17

By Joel Blecher, author of Said the Prophet of God: Hadith Commentary across a Millennium

In many ways, we live in the age of commentary. It seems like every cough, sneeze, and throat clearing is swiftly rendered into text, algorithmically circulated across social media, and subject to endless comments from every perspective. A pundit on every phone, a guru in every garage, and an interpreter on every internet browser.

And yet, our commentarial culture, when viewed historically, is remarkably constrained. Terse, even. We even have a phrase for it: “hot takes,” instant reactions that would seem to tap into humanity’s stream of consciousness in a hundred and forty characters or less. Two-hundred and eighty if you’re lucky. 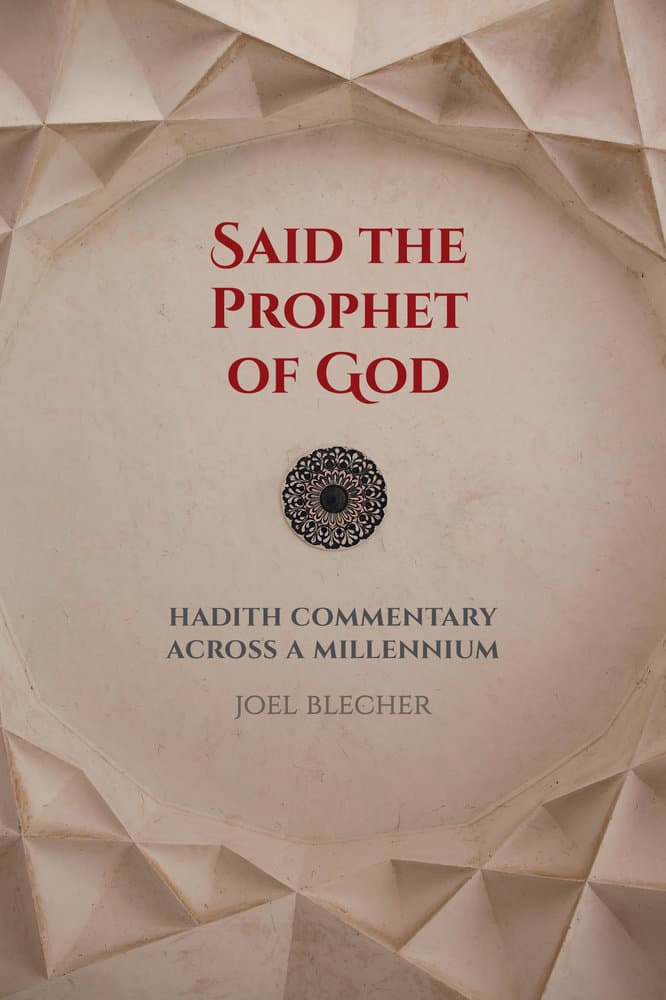 I have spent the last seven years studying a very different culture of commentary—commentary on Muhammad’s sayings or practices, called hadith. While similar to our contemporary commentarial culture in many respects—a key hub of social and intellectual life—hadith commentaries were multi-volume works of art, monuments to knowledge that required deep learning and decades of training and continuous revision. Commentators dedicated their lives to commenting on a collection of hadith—often passing away before they could complete their work—and meticulously crafted their texts to speak not only to their present, but across long periods of time. These commentaries were built for a kind of time travel—their authors bundled up into quires of paper and ink all of the knowledge they could find in the hopes that readers on the other side of the globe and centuries into the distant future might find some benefit in them. While many perished, the greatest ones actually succeeded, and are still read assiduously today.

I first discovered my interest in hadith commentary when I was invited to attend a live commentary session in Damascus, Syria in 2009. The commentator had spent seven years explaining a single hadith collection, and was only a third of the way through explaining the entire work. Attended by hundreds of students from across the globe, the commentator drew on a rich tradition of commentaries from classical Andalusia, medieval Egypt, and modern India to illuminate the meaning of the hadith for his present audiences. Emulating the practices of his predecessors, he read each hadith aloud, and used each word or phrase to digress on almost every aspect of the human experience. But when I returned to Princeton later that year to begin my doctoral research, I found that virtually nothing had been published on this complex and multi-layered tradition. I could not even find an entry dedicated to the subject in the Encyclopedia of Islam.

After a little digging into the sources, it became clear just how important and exciting this understudied field was. A quick search yielded hundreds of hadith commentaries produced over a thousand years, and each one told a unique story. A hadith commentary sparked public furors in 11th-century Andalusia. In Egypt in the 14th and 15th centuries, live hadith commentary sessions were the stage for spectacular and sometimes destructive rivalries among Muslim chief justices, while the sultans and emirs in attendance doled out gifts, jobs, and even tax breaks. The tradition found new life in British India in the age of print and mass literacy, and Urdu and English commentators emerged to address the political challenges of colonialism but also to solve intellectual problems that, they claimed, their pre-modern predecessors had missed.

Said the Prophet of God tells the story of this living tradition across a millennium, and I hope it will be clear why it deserves more than a “hot take.” As a central hub of Islamic social and intellectual life, the story of how Muslims interpreted and reinterpreted hadith has been a missing piece in the academy’s patchwork understanding of Islam and Islamic history. But this tradition is too vast for a single book or a single scholar to undertake. My hope is that this book spurs on future students and scholars to begin to mine this vast literature. In that spirit, Said the Prophet of God does not pretend to offer the last word on the subject, but rather an introduction to further debate, questions, and commentary.

Joel Blecher is Assistant Professor of History at George Washington University. His writings have appeared in the Journal of Near Eastern Studies, Oriens, and the Atlantic

Said the Prophet of God explores the rich social and intellectual life of hadith commentary and offers new avenues for the study of religion, history, anthropology, and law.