This guest post is part of our AARSBL blog series published in conjunction with the meetings of the American Academy of Religion & the Society of Biblical Literature in Boston Nov. 18-21. This post originally appeared on the blog in August 2016 and is reposted in advance of the author’s review panel Saturday, Nov. 18. Program details below. #AARSBL17

By Todd S. Berzon, author of Classifying Christians: Ethnography, Heresiology, and the Limits of Knowledge in Late Antiquity

We are always organizing knowledge. We are always aggregating data in order to arrive at a clearer, more coherent, and more systematic understanding of the world around us. But what happens when there is simply too much information to be collected? What happens when efforts to organize vast amounts of material fall short or fail completely? What happens when the knowledge we meticulously collect simply overwhelms the system or model designed to make sense of it? What are the epistemological implications and challenges that emerge in the production of ethnography—the process of writing about the customs and habits of peoples and communities? Classifying Christians: Ethnography, Heresiology, and the Limits of Knowledge in Late Antiquity investigates these questions within the context of late antique Christianity (ca. 150–500 C.E.). It provides an analysis of the ways in which early Christian authors not only produced ethnography (literally “wrote people”) but they also how they openly negotiated the very possibility and desire of undertaking such a task. Focusing on late antique heresiological literature (orthodox catalogues about heretics), I outline the techniques Christian writers used to collect, organize, and polemicize ethnographic knowledge about their Christian world. I show how the rituals, doctrinal beliefs, customs, and historical origins of the heretics functioned to map and delimit not only the composition of the Christian world but also the world at large. It is the epistemological challenges produced by such classificatory efforts that I explore throughout the book. 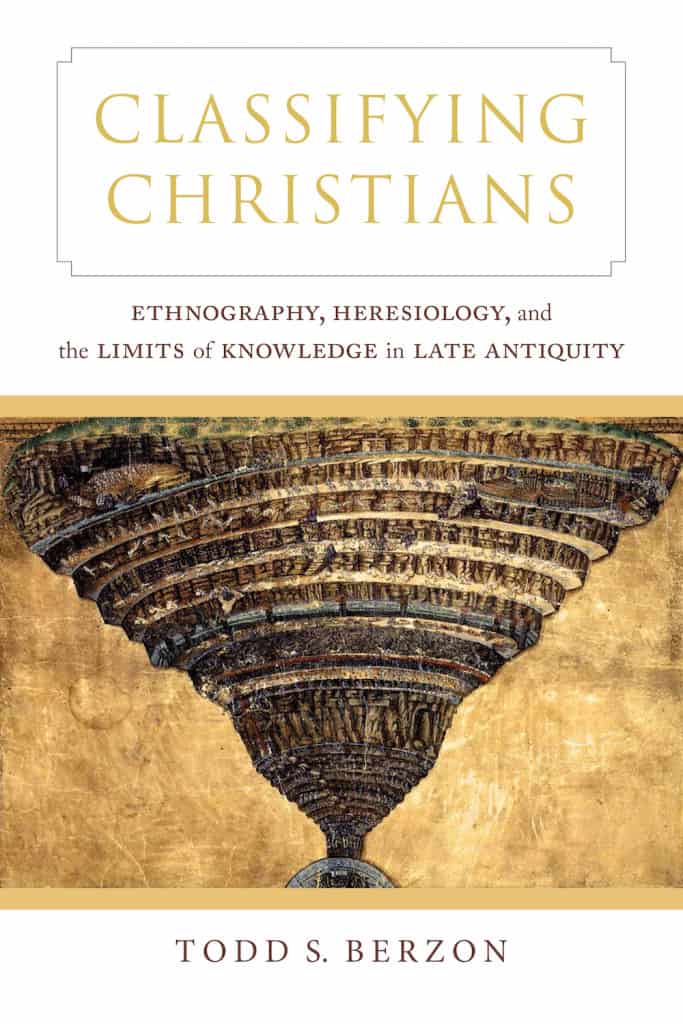 In the late antique world defined by remarkable religious and political change, heresiology illustrates the simultaneous attraction and repulsion of discovery and exploration. But just as Christians wrote their movement into the history of the world as the organizing principle of human difference through models of heretical growth and diffusion, they also codified a deep ambivalence about the literary or representative capacity of heresiological ethnography. I argue that heretics were highly unstable theoretical scaffolding through which Christian authors sought to make sense of the diverse and diversifying world around them. Knowledge about the heretics was necessary to assert orthodox theological dominance, but it was also highly dangerous. Heretical knowledge not only contaminated the ethnographer, but it also confused and in some sense overpowered the compiler because such knowledge was seemingly without limit. There was simply no end to the process of collecting knowledge about the heretics.

Indeed, Christian ethnography reveals not totalizing aspirations of authority—a projected ideology of total epistemological mastery—but a far less secure knowledge about the heretics specifically and the world generally: writing and knowing were endeavors fraught with conceptual fears and uncertainties. In fact, Christian authors explicitly contemplated the danger of investigating the natural and supernatural worlds. It is not simply that they struggle to classify the world around them, but that they openly discuss their failures to do just that. The heresiologists explicitly pondered the epistemological limits of ethnographic investigation, the representative capacity of language, and the unmanageability of ethnographic knowledge in texts. They know that there are limitations to what they can know about the heretics and that their efforts to produce a literary model to contain them is and always will be incomplete.

Discovery, travel, and expansion were not singularly triumphant endeavors, but rather highly perilous and disruptive efforts. The discoveries of new peoples (heretics, nations, islands, etc.) cemented intellectual unease and ethnographic fear. Precisely because the heresiologists gave ethnography into a distinctly theological texture, Classifying Christians points toward the enduring and potent legacy of Christianity in shaping the discourse of centuries of ethnographic investigation. By investigating the role ethnography played in mapping the theological landscape of the late antique world, my aim has been to refine discussions of emergent Christian discourses about heresy and human difference more broadly.

Join author Todd Berzon at SBL for a review panel of Classifying Christians
SBL Religious World of Late Antiquity Section
Saturday, Nov. 18
9:00 AM–11:30 AM
Hilton Boston Back Bay – Maverick A