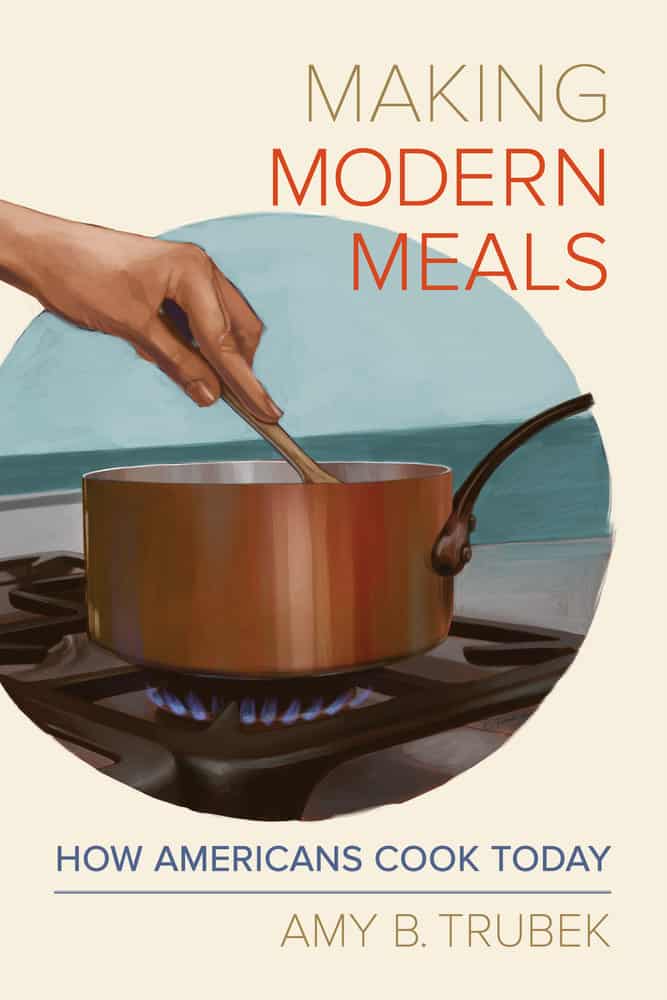 Carol, who is in her late twenties, is a single professional living in urban Boston. Her kitchen does not resemble Laura’s cavernous room; it is a small galley space where every item is neatly stored in cabinets and all surfaces are kept clean. She admits that she is a planner in all aspects of her life and certainly in her approach to preparing a meal. She likes to host dinner parties on the weekends and clearly enjoys the entire process, from creating the menu to shopping and cooking to hosting the event: “If I’m having a dinner party on Saturday, I plan my Saturday so that I can clean the house, clean the kitchen, get all my stuff ready, go food shopping, make sure that I have everything. . . . I kind of have a timeline.” Carol is documented preparing for a dinner party; she wants to share her love of hospitality. Carol proudly displays the printed menu for the evening’s dinner, and then goes on to display what she calls her tricks of the trade. One is a baked brie appetizer: “The secret to this is you don’t buy the baked brie they sell to warm up, you just buy a wedge, slice some apples and put that in halfway through: heat it for twenty minutes, put in the apples, and pour on maple syrup.” She serves this to her guests and then continues to prepare the main dish. Another of her secrets is spending money on ingredients: “This is a $40 bottle of olive oil, which makes a huge difference.” She prides herself on her engagement with cooking, which she characterizes as being important to her social life: “When I cook for others I take it very seriously. I put a lot more time and love into it.” She enjoys all aspects of preparing a meal when it is a special event: “I love doing it, and I love the display. . . . I spend a lot of time prepping.” She likes being known for being a good cook, but she aims even higher: “I think my next step is to be more creative in what I’m doing. It’s one thing to be a good cook, but I want to be really creative.” She actively engages in the process, figuring out a good recipe, testing it before she uses it at a dinner party, shopping at multiple stores (e.g., Shaw’s, Trader Joe’s, Whole Foods, Russo’s) to get the best ingredients, and setting up her house. In fact, the excitement of the process of making a meal for more than sustenance—the adventure of cooking, in a sense—is her passion: “The part about cooking that I love is seeing something I’ve never done before come out. I guess I like the final product.”

Carol acknowledges, however, that not all domestic cooking is about adventure. When she is by herself, the type of cooking she does is generally different: “I will throw a salad together, and I will do very simple things for myself.” When she’s just cooking for herself, she shops once a week and doesn’t plan ahead. She also sees that her love of cooking for others relies on the fact that these meals are special events: “I think I wouldn’t love it as much if I had to cook for my family every single night, but [I enjoy it] because it’s more of a novelty.” Her sense that cooking can, in some circumstances, be more of a chore than a pleasure comes from seeing her mother’s relationship to cooking change over the years: “I just never saw my mom loving cooking. I never saw her just love to cook. There were always five of us running around. . . . The food was always awesome, but I don’t think we truly appreciated what she gave us.” At another point, Carol both identifies with her mother’s burden and distances herself from it: “She cooked every night, and she was an awesome cook, but for her it was a chore. . . . I think it’s a generational thing.”

Ultimately, Carol’s articulation of her own identity as a cook is intertwined with her social relationships. These are between her and other cooks but also between her and a group of eaters. She understands she is not obliged to these eaters, although as she attests, her mother was not so lucky. As the contrast between Carol’s passion for cooking and her mother’s sense of drudgery reveals, cooking skills and knowledge, especially when categorized as a chore, cannot easily be extricated from the Gordian knot of social expectations. Cooking can all too easily develop a negative connotation, or at least a sense of ambivalence. Women often talk about their mothers’ cooking with a twinge of regret; although cooking can be an expression of nurturance, it certainly isn’t always. Carol intuitively makes a distinction between her planned dinner party—an event enhanced by the labor of thoughtfully making a meal—and her mother’s daily social responsibility to make a meal for her family. She sees the complexities of the ties that bind when making sense of her relationship to cooking.

Merriam-Webster’s Collegiate Dictionary gives the following definitions for the word “chore”: “1. the regular or daily light work of a household or farm; 2. a routine task or job; 3. a difficult or disagreeable task.”4 Defining cooking as a chore seems to make a lot of sense at first glance. It is certainly part of the regular work of a household; the fact that we must eat to live makes cooking a necessary daily activity and thus could easily be considered routine; and this regularity and necessity can certainly make it disagreeable, if not difficult. What a dictionary definition does not make explicit, however, is that the symbolic meaning of all chores are not equal. Cooking is not the same as sweeping or taking out the trash because the end result is not household cleanliness or order. Making a meal merges certain types of household tasks, webs of social relationships, and needs for nourishment and nurturance. Categorizing cooking as a chore is tempting, and it is common in contemporary American discussions of the task, but perhaps Carol’s point that cooking can be a chore but can also be much more needs to be examined in more detail, especially in terms of what cooking means to nurturing social relations.

Amy B. Trubek is Associate Professor of Nutrition and Food Science at the University of Vermont. She is the author of Haute Cuisine: How the French Invented the Culinary Profession and The Taste of Place: A Cultural Journey into Terroir.

A Peek into the San Francisco Public Library's Archives on the Black Panthers
A History of Cookbooks: Recipes in Verse