by Seth Brodsky, author of From 1989, or European Music and the Modernist Unconscious

I’ve been thinking a lot about the categories historians rely upon, and their strange mix of power and precariousness—all the more so when music is involved. So I wanted to point to what I think is the most precarious (and yes, maybe the most powerful) category in my book From 1989, or European Music and the Modernist Unconscious. It’s that last word: unconscious. 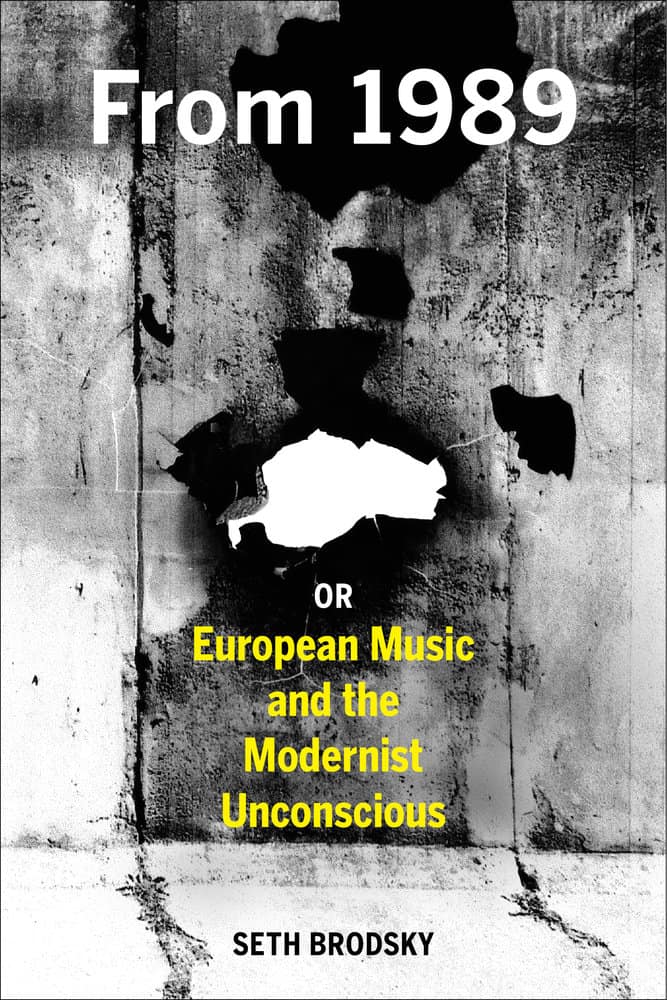 I agree with psychoanalyst Jacques-Alain Miller that the matter of the unconscious ultimately comes down to a question of faith—which is to say, something that doesn’t necessarily belong in a history. As Miller puts it: “Do you believe—or not—in the existence of the unconscious? Of something more or less like what Freud called the unconscious?” Freud’s most schematic account of the unconscious, from 1915, makes clear he’s not talking about some personal cellar of the mind. He’s talking about something that is, still today, is very difficult for culture to digest: a site of self where “all the acts and manifestations which I notice in myself and do not know how to link up with the rest of my mental life must be judged as if they belonged to someone else …” If the unconscious is a cellar, it’s not your cellar—but it’s still in your house.

This suggestive power would seem to disqualify the psychoanalytic unconscious as a foundation for serious history writing. We sit now on a century of various histories-of-spirit, psycho-biographies, and highbrow hack-jobs masquerading as hermeneutics-of-suspicion, all fueled by the roaring irrefutability of the Freudian unconscious. Ironically, the latest entry is from the career Freud-basher Frederick Crews, who does nothing less—I don’t think I’m exaggerating!—than reveal how Freud’s unconscious desires invalidate his entire project.

I’m a believer in the unconscious—the unconscious in general, as an unprovable but dynamic element of individual psychic life and collective social life. But in relation to music history, I felt a strong urge to contain my engagement with it; I’m not especially interested in psycho-biography and with the allegedly “whole person”; in dealing with the work especially of living composers, I wanted to avoid getting too far in their heads. I wanted to stay more in their ears—to try, paraphrasing Freud, to hear “all the acts and manifestations” in their musical life that could be “judged as if they belonged to someone else.” The 1989 project hence began as a robustly intertextual one, a way of re-organizing an otherwise meaninglessly organized field—say, the alphabetized list of all works written and premiered around 1989—according to the axiom of a contained otherness: incorporated, repressed, misrecognized, flaunted. My first attempts (below) were crude; they owed something to Freud’s Rome, imagining the year as an archeological site literally resting atop its own sedimented musical history. 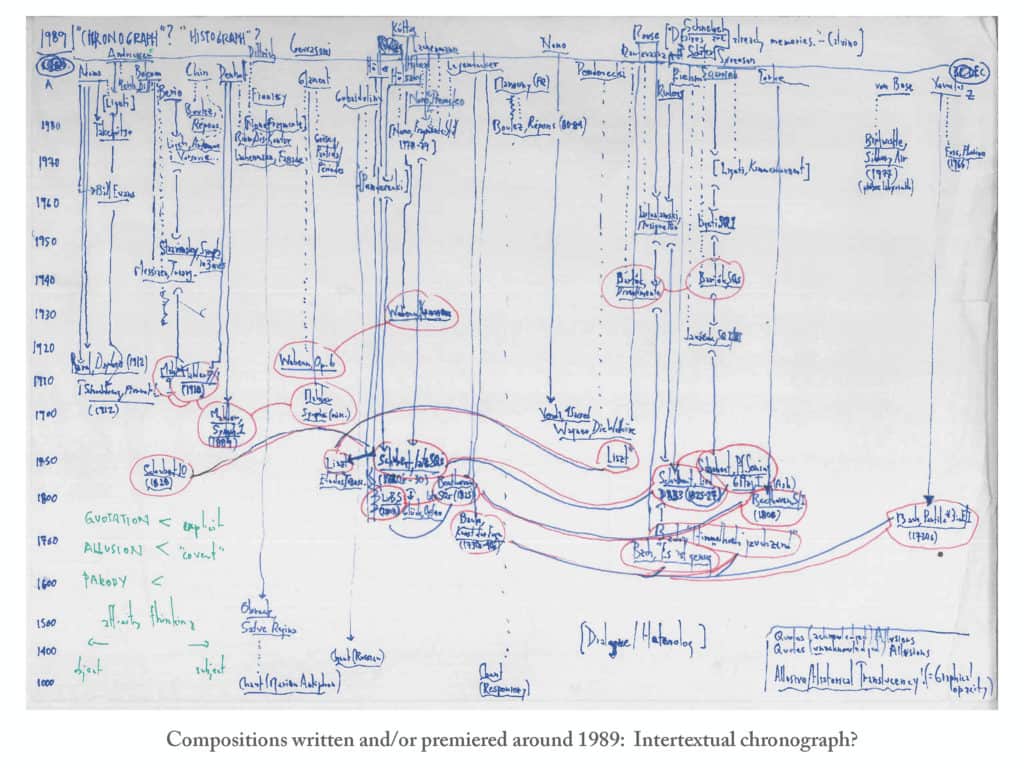 I was struck by the existence of actual canonical strata—a Bach layer, a Schubert or Beethoven layer, even a Liszt layer. Were these evidence of something coherent, consistent beyond the mere invocation of a common name and corpus? Beyond any of the resulting book’s successes and failures, I still think this intertextual paradigm is the most promising, the most catholic: what, after all, is more embracing than the question of what newer music has done to be-or-not-be older music? Music history as a millennial game of telephone, the noisiness of reception. How might new music histories be histories, not just of hearing, but mishearing? And how might the history of a long musical modernism—of music trying very hard to be new, modern, modo, now—intensify this process, making mis-hearings and missed encounters the very paradigm of musical desire? A desire for less signal and more noise. 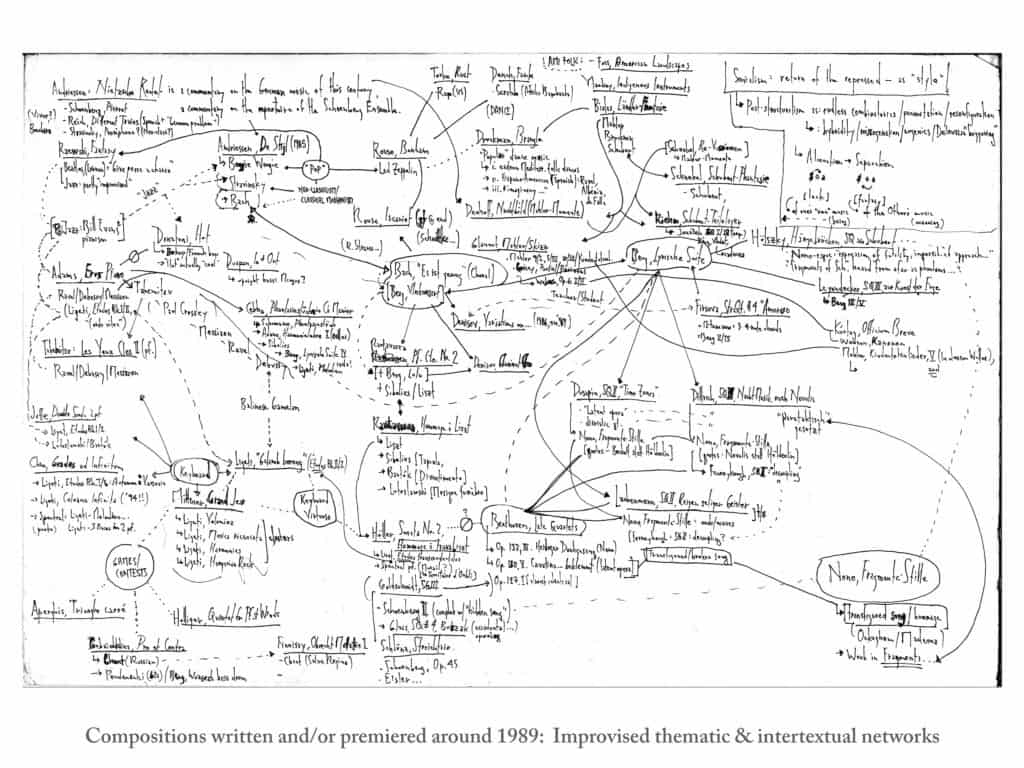 These questions eventually led me to organize European new music in 1989 through an series of “heterotopian networks,” (above) in which intertextual and thematic coincidences yielded webs of works all linked by some other music. The newer work became what Michel Foucault called a heterotopia, an “other space”—radically autonomous, but actually existing —in which older music was misheard, reconfigured, or, in the book’s eventual concept-metaphor, analyzed, not unlike a patient in a psychoanalytic clinic. These networks, eventually formalized, ranged from fairly objective—a group of six “Schubert” pieces, say—to quite subjective—a group of works all dealing with non-existent places, u-topoi, and which I labeled “nowheres.” And each of these networks was themselves a kind of Freudian Rome. 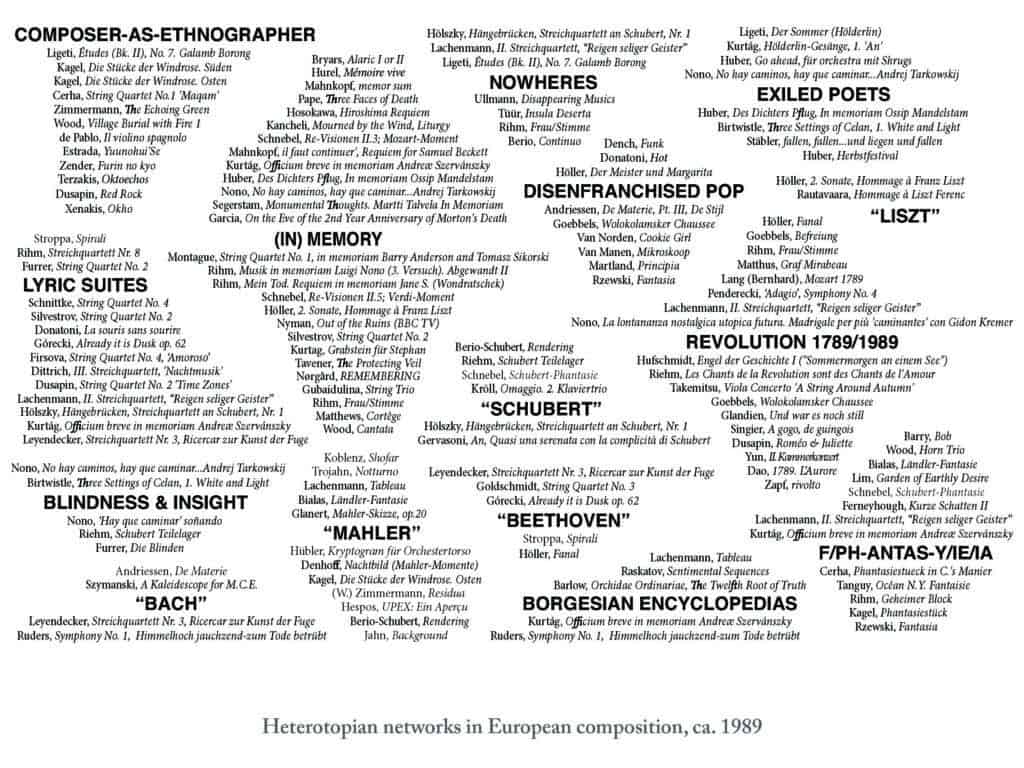 The “Lyric Suites” network, for instance, grouped a series of otherwise very different string quartets that all had some connection to song—but a repressed or stifled song, hidden or encrypted, sung sotto voce or at night, to lost time or lost communities and persons, or to the dead. Emergent nodes began to quilt the otherwise proliferating associations in place: Luigi Nono’s 1980 quartet Fragmente—Stille, an Diotima, Alban Berg’s Lyrische Suite from 1926, Ludwig van Beethoven’s late quartets from a century before that. In one case, a thread emerged leading from the sixteen-note “shadow song” near the end of Helmut Lachenmann’s Second String Quartet from 1989; to the “broken song” from Nono’s Fragmente, quoting a 15th-century chanson; to the “hidden song,” setting a Baudelaire poem, that Berg encrypted in the last movement of his Suite; to the “failed song” that the first violin stutters in the famous “beklemmt” section from the Cavatina in Beethoven’s Op. 130.

Such threads are what helped convince me to take a psychoanalytic account of musical modernism as more than mere heuristic. From the beginning of Freud’s formalizations, the psychoanalytic unconscious has experienced its own repressions, none more intense and persistent than of its radical negativity. To take one famous example, the “Oedipus complex” is on the one hand a way of accounting for a network of repressed fantasies and fears that seem to mark many people in early childhood. But it soon became a means of repression—repression of the cavernous uncertainties still plaguing patients otherwise convinced, fruitlessly, that they were suffering from Oedipus complexes; repression, on the part of the child, of their own cavernous uncertainty about where they stood in relation to others. This other unconscious is not a positive content to unearth, pin down, expose, judge; rather, it is a persisting negative, unavailable to the psyche that suffers it. For Freud, and for Lacan after him, this unconscious was a fundamentally intersubjective affair, and, more importantly for music, an auditory one. It involved listening, not for proof, but for evidence and testimony; it required an auditor who can hear what consistently fails to give voice to itself. This is where I ended From 1989: trying to listen to failed voices. I asked if musical modernism is not, in some sense, what psychoanalysis sounds like when it wanders into the concert hall. Or, more pointedly, if psychoanalysis is what musical modernism sounds like when it enters the disenchanting space of the clinic.