Welcome to the first post in our #7CheapThings blog series! Raj Patel & Jason W. Moore’s A History of the World in Seven Cheap Things focuses on seven areas that are the foundation of modern commerce: nature, money, work, care, food, energy, and lives. How has the cheapening of these things made the world safe for capitalism? Follow along to find out. 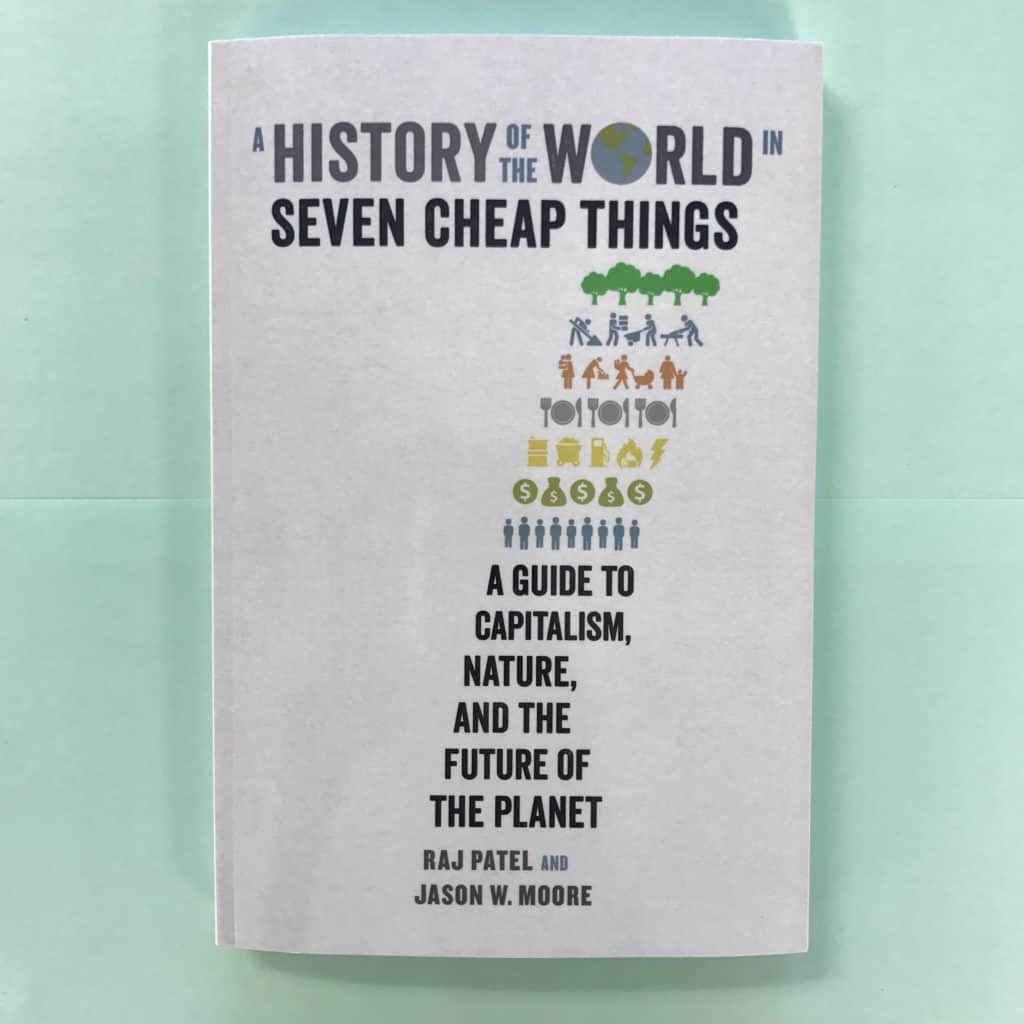 Raj & Jason, in their book, argue that humans in a capitalist system abuse the ecosystems that they are a part of, with the demand for profit outweighing detrimental effects on the environment. In this shift towards profit governing life, a split between the ideas of “Nature” and “Society” needed to occur. What exactly is meant by that is outlined in the excerpt below.

In the English language, the words nature and society assumed their familiar meanings only after 1550, over the arc of the “long” sixteenth century (c. 1450–1640). This was, as we shall see, a decisive period in England’s capitalist and colonial history. It marked the rise of the Spanish and Portuguese empires and their construction of massive New World production systems, worked by coerced Indigenous and African labor. These transformations were key elements of a planetary shift in the global center of power and production from Asia to the North Atlantic. That shift did not come fast. Europe was technologically and economically impoverished compared to civilizations on the other side of Asia, and only after 1800 did that change. China, recall, already had the printing press, a potent navy, gunpowder, and vibrant cities, and it was marked by both wealth and environmental crisis. Where European capitalism thrived was in its capacity to turn Nature into something productive and to transform that productivity into wealth. This capacity depended on a peculiar blend of force, commerce, and technology, but also something else—an intellectual revolution underwritten by a new idea: Nature as the opposite of Society. This idea gripped far more than philosophical minds. It became the common sense of conquest and plunder as a way of life. Nature’s bloody contradictions found their greatest expression on capitalism’s frontiers, forged in violence and rebellion—as the witch killing demonstrates.

We take for granted that some parts of the world are social and others are natural. Racialized violence, mass unemployment and incarceration, consumer cultures—these are the stuff of social problems and social injustice. Climate, biodiversity, resource depletion—these are the stuff of natural problems, of ecological crisis. But it’s not just that we think about the world in this way. It’s also that we make it so, acting as if the Social and the Natural were autonomous domains, as if relations of human power were somehow untouched by the web of life.

This means that we’re using these words—Nature and Society—in a way that’s different from their everyday use. We’re capitalizing them as a sign that they are concepts that don’t merely describe the world but help us organize it and ourselves. Scholars call concepts like these “real abstractions.” These abstractions make statements about ontology—What is?—and about epistemology: How do we know what is? Real abstractions both describe the world and make it. That’s why real abstractions are often invisible, and why we use ideas like world-ecology to challenge our readers into seeing Nature and Society as hidden forms of violence. These are undetonated words. Real abstractions aren’t innocent: they reflect the interests of the powerful and license them to organize the world.

That’s why we begin our discussion of cheap things with Nature. Nature is not a thing but a way of organizing—and cheapening—life. It is only through real abstractions—cultural, political, and economic all at once—that nature’s activity becomes a set of things. The web of life is no more inherently cheap than it is wicked or good or downloadable. These are attributes assigned to some of its relationships by capitalism. But it has been cheapened, yanked into processes of exchange and profit, denominated and controlled. We made the case in the introduction that capitalism couldn’t have emerged without the cheapening of nature; in this chapter we explore the mechanics and effects of this strategy.

Click here to win an Advance Reader’s Copy of A History of the World in Seven Cheap Things on Goodreads. Giveaway ends on September 15th.

Raj Patel is an award-winning writer, activist and academic. He is a Research Professor in the Lyndon B. Johnson School of Public Affairs at the University of Texas, Austin and a Senior Research Associate at the Unit for the Humanities at Rhodes University. He is the author of Stuffed and Starved: The Hidden Battle for the World Food System and The Value of Nothing.

Jason W. Moore teaches world history and world-ecology at Binghamton University, and is coordinator of the World-Ecology Research Network. He is the author of several books, including Capitalism in the Web of Life: Ecology and the Accumulation of Capital, and numerous award-winning essays in environmental history, political economy, and social theory.

Introducing the 2017 Atelier Finalists
Transcendental Style in Film Revisited: With a New Introduction by Paul Schrader

#7CheapThings: What Is Cheap Money?