By Mark Padoongpatt, author of the forthcoming Flavors of Empire: Food and the Making of Thai America

As we celebrate Asian Pacific Islander American Heritage Month this year, we do so right as the United States is commemorating the 50th year anniversary of the “American War” in Vietnam. The war has had a profoundly deep, wide-ranging, and lasting impact on Asian/Pacific Islander America. It resulted in the death of millions of Vietnamese, Hmong, Laos, and Khmer people, including civilians, at the hands of U.S. soldiers and bombs. It generated displacement, trauma, political destabilization, and the migration of roughly 1.2 million Southeast Asians, many of them refugees, to the United States between 1975-2000 — a migration that (coupled with the 1965 Immigration Act) transformed the composition and demographics of Asian/Pacific Islander America and America as a whole. 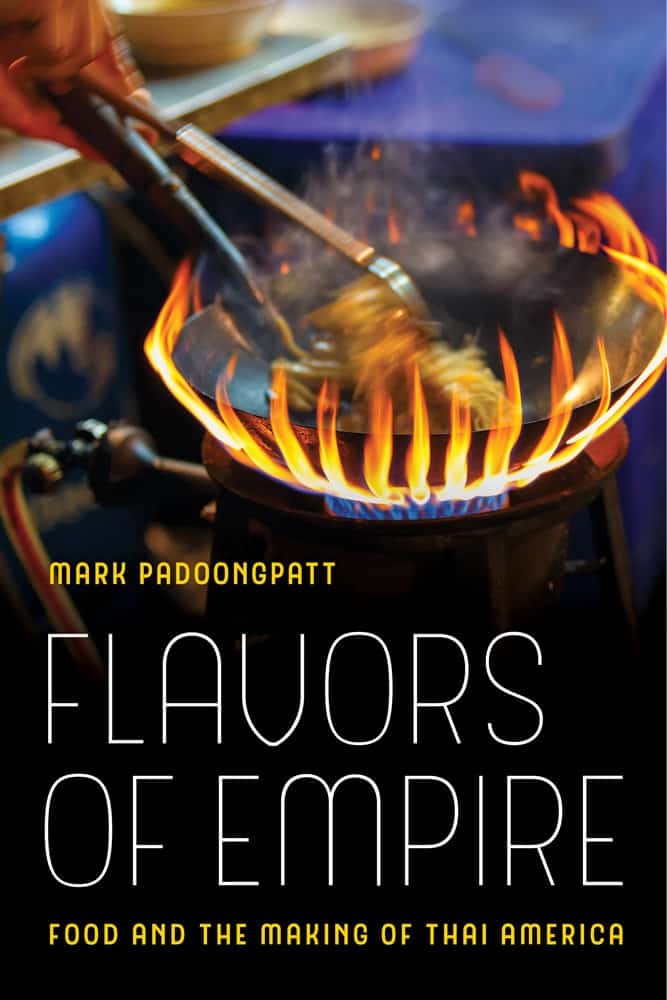 war, of course, is not a vestige of the past. As such it demands critical, relentless reflection if we want to understand the diversity and tensions among Asian/Pacific Islander Americans today as well as the workings of the postwar American empire. For one, the war extended beyond Vietnam and was a flashpoint (a bloody and violent one, no doubt) of a much longer period of U.S. Cold War intervention throughout Southeast Asia. The affects of U.S. empire and war also ran much deeper than combat, bombings, militarization, and state-sponsored dictatorships. America insinuated itself into the textures of everyday life via embassies, businesses, private organizations, educational programs, modernization projects, popular culture, tourism, and various other forms of cultural diplomacy, such as the Peace Corps, to win “hearts and minds” in pursuit of foreign policy objectives in the region. All of which shaped personal and group identities, relationships, worldviews, and cultural practices as people in Southeast Asia came to terms with American global power.

One way to understand the everyday life — and “afterlife” — of U.S. empire in Southeast Asia is through foodways. My book, Flavors of Empire: Food and the Making of Thai America, traces how the informal postwar U.S. empire in Thailand turned Thai food into a central site of Thai American identity and community formation in Los Angeles. Though Thailand has the distinction of being the only Southeast Asian country to avoid formal Western colonization (a distinction Thais take immense pride in), after World War II, however, the United States, as a new global leader, maneuvered itself into the country more intrusively than ever before to combat the spread of communism, ushering in what Benedict Anderson has referred to as Thailand’s “American Era.” This neocolonial relationship established circuits of exchange between the two countries. It allowed thousands of U.S. citizens to go toThailand and “discover” the exciting new flavors and tastes of Thai food. Many, particularly white women, introduced Thai cuisine back in the United States by writing “Siamese” cookbooks and teaching cooking classes. When Thais arrived in Los Angeles, they reinvented and repackaged Thai food in various ways to meet America’s growing fascination with the cuisine. This led to Thais constructing their identities mainly through the perceived exoticness and sensuousness of Thai food.

The history of Thai food reveals that the American war in Vietnam was more than Vietnam, and that it lives on in mundane ways and unexpected places. Its legacy affects everything from the cuisines featured in restaurants and the identities of restaurateurs, cooks, and grocery store clerks to the contours of entrepreneurship and the look and feel of urban and suburban spaces. The experiences and stories that stem from it — though not reducible to a singular time, place, group, or narrative — stand as a reminder that, as Asian/Pacific Islander Americans, our relationship with America is rooted in and defined by dominance.

Padoongpatt is Assistant Professor of Asian and Asian American Studies at the University of Nevada, Las Vegas.

His book Flavors of Empire: Food and the Making of Thai America, publishing this September, explores the factors that made foodways central to the Thai American experience.

Melania and Melania: Two Vexing Icons of Early Christianity
You Can't Always Get What You Want: Me, We, or AARP?