In Shari’ah on Trial: Northern Nigeria’s Islamic Revolution author and scholar of Islam Sarah Eltantawi gives a powerful account of how in 1999 Northern Nigerians reached a point of desperation that they took to the streets to demand the return of the strictest possible shari’ah law. Analyzing changing conceptions of Islamic theology and practice as well as Muslim and British interactions dating back to the colonial period, Eltantawi explains the resurgence of shari’ah in Nigeria and the implications for Muslim-majority countries around the world.

In this Q & A, Eltantawi discusses the case of Amina Lawal — the Nigerian woman sentenced to death by stoning for adultery — that inspired her to write the book, along with the fieldwork and research she conducted to understand the case, and her thoughts on the many perspectives of shari’ah law. 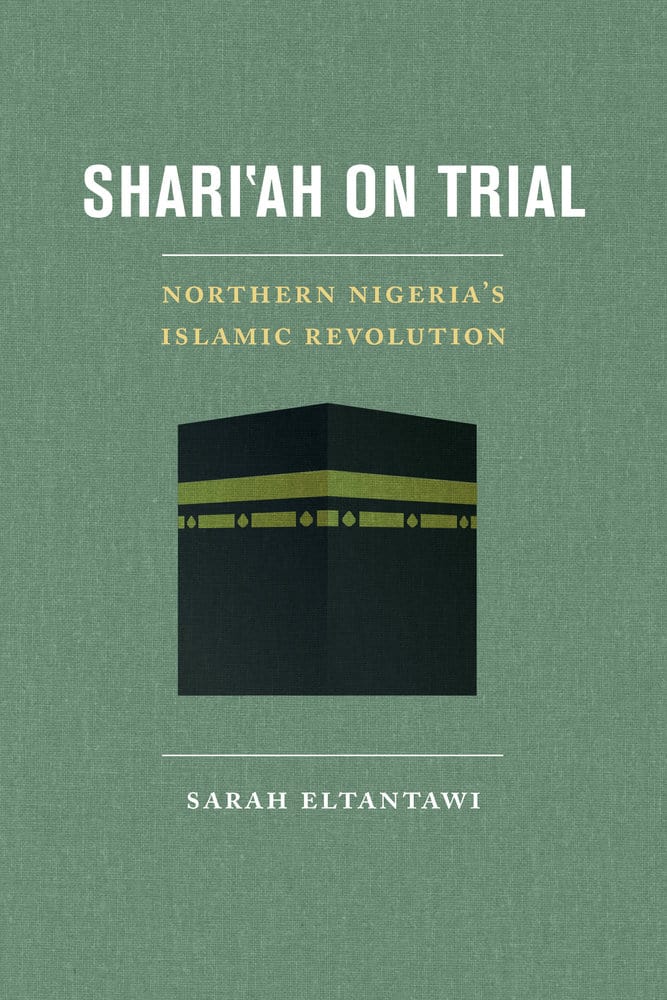 Muslim societies in African countries are generally understudied, which makes your scholarship all that much more important today. Can you tell us what led you to this project? How did Nigeria become the focus of your research?

Sarah Eltantawi: On one level, I took on this project because I could not get the trial of Amina Lawal out of my head. In 2002 when Lawal was first sentenced to death by stoning for extra-marital sex, I was working in Washington DC doing what I think of as “post-9-11 triage” for the American Muslim community. On one particular day I was in a meeting of major civil rights leaders when my phone would not stop ringing with media calls. The Lawal case had exploded in the US. Two things immediately struck me as noteworthy about all the attention this case was getting. The first is that this was the same moment the Iraq war was being prepared, and rather than having a sustained national conversation about the deaths that would surely ensure from that war, there seemed to be a collective refocusing on this one case of “African” “Muslim” barbarity against one woman. At the same time, those I consulted about this case and the stoning punishment in the American Muslim leadership seemed to totally dismiss the case as something that “just happened in Africa.”

I knew this could not be true (or was it?), because I knew stoning for adultery was legal under some circumstances in Islamic law (I would later find out that stoning for adultery was virtually unheard of in Islamic history until the 20th century — which is why I call stoning a post-modern/post-colonial phenomena). In short, I sensed that many different actors were projecting a number of interesting things onto this case and my fascination with it took hold and grew.

What fieldwork did you conduct, and were there any challenges you encountered along the way?

SE: In 2010 I conducted fieldwork in Northern Nigeria — and yes, there were challenges! In all honesty, all parts of this project were challenging for me. Prep work included getting a passable grasp of basic Hausa, which took a while, as well as developing my questions enough so I could focus in the field. It was important to me to have a solid Islamic legal grounding before I went to Nigeria, so I spent years before 2010 with Arabic legal texts and an attempt to submerge myself in the principles of jurisprudence (uṣūl al-fiqh) to understand how Lawal was prosecuted. It turned out of course that understanding why Lawal was sentenced to death by stoning had much more to do with Nigeria than the principles of jurisprudence. I had a lot of reading and studying to do.

What are the various perspectives of shar’iah you address in the book, and how do they differ?

SE: There are several answers to this question. One is the seemly trite — but accurate —observation that there are as many shari’ahs as there are people. To confirm this simple observation, just travel to a Muslim-majority country and ask people what they think the shari’ah is. With respect to trends of shari’ah in Nigeria, I identify a few in the book. The first is the masculinist shari’ah of the post-1999 revolution that is this book’s backdrop. It is an uncompromising view of shari’ah that can provide “silver bullet” solutions to ongoing, pressing social and political problems. This version of shari’ah also rights historical wrongs like colonialism and the ongoing economic plundering of Africa. Finally, this masculinist shari’ah evens the playing field between men, such that before the eye of an unfathomably powerful God, all men are equal. The champions of this version of shari’ah are the “true believers”; those who provided the intellectual impetus for the codification of shari’ah penal laws after the ’99 revolution.

I think for the majority of people, there is a softer shari’ah that is operative; one that views the shari’ah as a means to combat, first and foremost, poverty and corruption. This is a shari’ah that takes mercy on the suffering of regular people. Finally, one of the most fascinating shari’ahs I discovered is a profoundly skeptical female version (I hesitate to write feminist, but one probably could); this version is clever, not easily convinced, sort of nodding and smiling before the cameras, but acutely aware of the suffering of many women in Nigeria under a very patriarchal interpretation of shari’ah. It is these women who coined the phrase “political shari’ah”, (as opposed to “ideal” shari’ah) — a brilliant formulation that allows for a critique of shari’ah without violating the social contract that forbids critique of Islam.

What can you tell us about Nigeria’s current legal system and Islamic law?

SE: Founded in 1960, Nigeria is a very young country. The (British) colonial period, starting in the late 19th century, brought with it what Nigerian legal scholar Awalu Yadudu calls a systemic regime of “legal warfare” against Islamic law. Nigerian scholar Mohammed Sani Umar documents this legal warfare as a regime of suppression and containment of Islamic law. The post-1999 shari’ah afforded Nigeria the opportunity to test its secular constitution — specifically article 38, which maintains freedom of religion — against the challenge of shari’ah in the north. The results have been interesting. No one challenged the shari’ah in court, and the words of then-president Olusugon Obasanjo proved prescient. He said, to paraphrase, that if shari’ah is manmade and not from God, it will fail. Many people consider the post 1999 shari’ah experiment to have failed, and today the main challenge is combatting Boko Haram.

With the rise of Boko Haram, what does Shari’ah on Trial tell us about what’s happening in Nigeria today?

SE: Shari’ah on Trial really sets the stage for the rise of Boko Haram. Certain parts of the contemporary Muslim-majority world seem to be caught in a cycle of doubling down on Islamic “authenticity” to the point of nihilism, as the examples of Boko Haram and ISIS bear out. There is a real sense that the failure of the post-1999 shari’ah experiment opened the door to Boko Haram. The timeline at the beginning of the book sets this up, I think: you’ll see that in the 1980s and 1990s, the strident Islamist group in Nigeria was the Izala, who infamously rejected Sufi orders in the region of centuries-long standing. In 2015, Boko Haram swore their allegiance to ISIS and declared the Izala heretics for their willingness, in practice and in theory, to work with the Nigerian government. The rules of engagement that allows one to claim Islamic authenticity are getting so extreme that I think they are turning into a parody of themselves — one can only describe the wanton destruction of groups like ISIS and Boko Haram using farcical language, I think — but there are tragic consequences to this obscurantism and violence.

Sarah Eltantawi is Assistant Professor of Comparative Religion at Evergreen State College and an analyst of the Muslim-majority world on major media outlets. A scholar of Islam, she earned her PhD in the Study of Religion from Harvard University, where she also obtained her MA in Middle Eastern Studies. Before taking up scholarship she had a career as policy and communications director of two American Muslim civil rights organizations in Los Angeles, Washington DC and New York City.

The Furor Over Conservative Speakers: A Long Choreographed Enterprise
Celebrating the City: Photos from the MAS NYC Awards Ceremony