By Andrew S. Jacobs, author of Epiphanius of Cyprus: A Cultural Biography of Late Antiquity

“What a twit.” So a wise colleague recently described Epiphanius of Cyprus (d. 403), the oft-maligned subject of my recent book.

At a conference in March, another prominent historian described Epiphanius as “the stupidest of all Church Fathers.”

Boyarin: Epiphanius the stupidest of all Church Fathers. #rjo

In conversations with friends and fellow scholars while writing Epiphanius of Cyprus, I heard him called “horrible” and “a liar.” 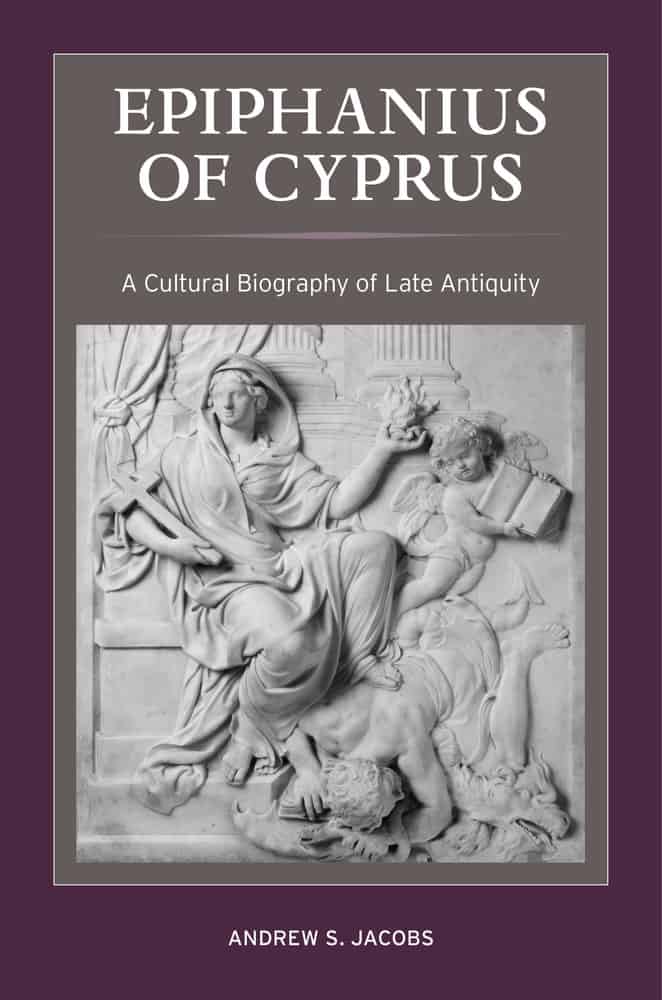 To be sure, Epiphanius — monk, bishop, controversialist, and author of a massive, multi-volume encyclopedia of heresies characterized by invective, mendacity, and intolerance — was probably not a nice person. But the pages of history books are not populated by “nice guys”: so why the persistent distaste for Epiphanius? This scholarly aversion to Epiphanius is a puzzle I return to in the concluding chapter of Epiphanius of Cyprus, a puzzle compounded by Epiphanius’s undeniable prominence in his own day and time: a celebrity among monks and bishops, dismissed (or, at the least, marginalized) as a liar and twit by scholars today.

I have no interest in promoting Epiphanius’s intellect (although he probably wasn’t so much stupid as he was unphilosophical) and I have no interest in making us like him (he certainly wouldn’t care for me). But I do believe that history-writing is always to some extent an exercise in answering pressing issues in the present by reimagining traces of the past. We find certain persons, texts, and events “interesting” precisely because of our own interests (meaning both our engagements and our stakes). If Epiphanius seems not to fit into our histories, it is because he works against those interests.

What kind of past are we determined to create that has no room for Epiphanius? Why doesn’t our late antiquity have room for twits?

The writing of history, like any cultural production, is a story we want to tell about ourselves. Late antiquity — born in the colonial 19th century, nourished in the postcolonial 1950s, and matured in the multicultural 1970s — was a period of intellectual ferment, transformation, and rebirth, a Eurasian renaissance from which emerged new thinking, new arts, and new religions. It reversed the sneering disdain of Enlightenment historians like Edward Gibbon. It claimed as its mascots the great thinkers and idea men (and, in more recent years, idea women), impresarios of change and authors of new worlds. It is entirely understandable that we would want to produce a late antiquity from which we might imagine a better present and future for ourselves.

History-writing, like all culture-making, is about inclusions and exclusions, about viewing our world with certain blinders. Epiphanius was perhaps a twit, certainly intolerant, absolutely dedicated to finding and rooting out “the other” from his orthodox empire. To exclude him from our culture-making forays into the past, however, is to leave ourselves open to all sorts of unpleasant surprises about the world we inhabit in the present. Epiphanius’s prominence in late antiquity was not, I argue, a fluke but rather the dark side of a new, transformative, diverse world being born. I am not calling for a return to Gibbon’s sneering condemnation of late antiquity, but rather a more clear-eyed appreciation of all of its shadows and nuances.

We may not like the twits of history, but without facing them head on we are disarming ourselves against them in the present and the future.

Andrew S. Jacobs is Professor of Religious Studies and Mary W. and J. Stanley Johnson Professor of Humanities at Scripps College in Claremont, California. He is the author of Remains of the Jews: The Holy Land and Christian Empire in Late Antiquity and Christ Circumcised: A Study in Early Christian History and Difference.

Are Contemporary Political Movements Ancient “Heresies” in Disguise?
Better Git It in Your Soul Wins 'Jazz Book of the Year' Award