by Camilo Trumper, author of Ephemeral Histories: Public Art, Politics, and the Struggle for the Streets in Chile 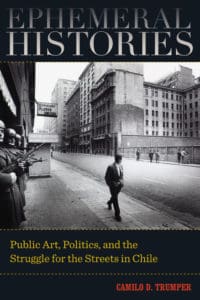 Chile’s Museum of Memory and Human Rights marked 2017’s World Book Day by circulating a photograph of uniformed cadets burning books and magazines on city streets in 1973, a jarring image mobilized in hopes that “Never Again” would Chileans censor the written word as they had after the bloody coup that toppled Salvador Allende’s democratically elected socialist government. Photographer Kena Lorenzini’s collection of images, published as Marcas Crónicas: Rayados y panfletos de los 80, reveals a different practice of writing and erasure in Santiago, Chile’s capital city. Hers are austere records of the breathtaking range of rayados scrawled in public and semi-public spaces in the almost two decades of military rule: complicated debates taking place on, and taking advantage of the fleeting privacy afforded by, the locked doors of bathroom stalls; party slogans furtively etched on the back of bus seats; and banners unfurled by students, artists and activists to protest the dictatorship’s terror. These photographs map a hidden landscape of political writing hiding in plain sight.

The political activists who created this political landscape drew on a long history of urban contest that reached its apex under Allende. My book, Ephemeral Histories: Public Art, Politics, and the Struggle for the Street in Chile, studies how women and workers, students and artists claimed public spaces as their own, turning to murals, posters, and graffiti as a means of shaping city streets, squares and walls into vibrant arenas of political exchange in democracy. Creative forms of public art and writing were quickly targeted by the nascent military regime, which looked to “cleanse” the landscape of any trace of activism, and forced residents to whitewash walls at gunpoint, to burn and bury posters alongside books and magazines. But santiaguinos responded creatively to censure. Lorenzini’s most compelling images focus on the ordinary inscriptions that citizens carved onto city walls as everyday acts of urban transgression that sustained resistance to military rule. In one particularly poignant series, her lens follows a web of text as it snakes along city walls, arching across buildings and around corners. Erasure leads only to further expression. Just as quickly as phrases condemning dictatorship are scratched out, new, vibrant responses appear, crying out over the thin cover of whitewash. Her photographs suggests that santiaguinos turned again to clandestine public writing in dictatorship, perfecting techniques originally learned in democracy to re-build spaces of vibrant political debate. These ephemeral acts of public writing help build a public sphere of political debate rooted in public space, and an ephemeral practice of political citizenship played out in the very streets and walls quieted by state violence and attempted censorship.

This year’s LASA congress theme, “Dialogues of Knowledge,” suggests that we must open ourselves to consider creative forms of knowledge generated at the boundaries between disciplines, experiences, and spaces. Lorenzini’s photographs offer an excellent example of this form of critical interdisciplinary thinking. They reveal the strategies and tactics of urban conflict, and public writing in particular, to be creative responses to dictatorial rule, an “other” form of knowledge Chilean citizens living under dictatorship developed to navigate public and private spaces, sustain political dialogue, and limit the authority and legitimacy of military authority. In so doing, they transformed the city it into a vital political arena and themselves into active political citizens in the face of state-sponsored violence and terror.

Elementa: Science of the Anthropocene Call for Papers: Earth & Environmental Science
The Complicated History of Crime and the Truth in Mexico