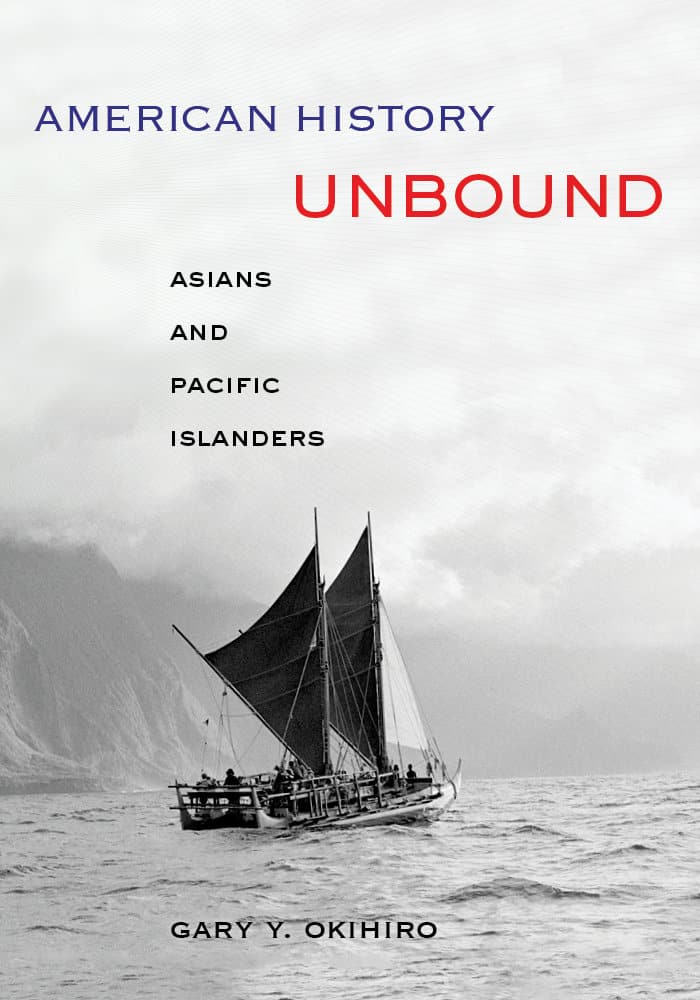 This month is Asian/Pacific American Heritage Month, a celebration of Asians and Pacific Islanders in the United States. A broad term, Asian/Pacific encompasses all of the Asian continent and the Pacific islands of Melanesia, Micronesia, and Polynesia. As author of American History Unbound Gary Y. Okihiro points out in the following excerpt from his introduction to the book, the term itself is elastic, and when first used, referred principally to Chinese and Japanese.

He also writes that the standard narrative of Asian American history begins with Asians immigrating to California in search of new opportunities. Indeed, Asian/Pacific American Heritage Month is observed in May to commemorate the first Japanese immigrants who arrived in the U.S. on May 7, 1843, and to mark the anniversary of the completion of the transcontinental railroad—the majority of workers being Chinese immigrants—on May 10, 1869.

In American History Unbound, Okihiro offers a rewrite of that standard narrative:

The term Asian American was invented in the late 1960s, for the purposes of political solidarity and mobilization. Asians living in America determined that a shared history of Orientalism and oppression united them and that by organizing as a group named by Europeans, they could counter white supremacy more effectively. Following the Italian Marxist Antonio Gramsci, the literary critic Gayatri Spivak has named that argument strategic essentialism, or a temporary strategy pursued in a war of positions. Readers should think of categories such as Asian Americans and Pacific Islanders as temporary contrivances in the struggle against oppression—as contextual, relational, and impermanent.

Asian American is an elastic term. When first used, it referred principally, if not exclusively, to Chinese and Japanese. Some of the founding figures in the emerging field of Asian American studies insisted that it applied only to those born in the United States and not to the migrant generation born in Asia. Gradually, through the initiatives of the neglected ethnicities, it grew to embrace Koreans, Filipinos, and other Southeast Asians, along with South Asians and, most recently, West Asians, such as those from Iran, Iraq, Saudi Arabia, and Turkey…

…The standard narrative of Asian American history begins with Asians, mainly Chinese, immigrating to California to escape poverty and political repression and in search of new opportunities, not unlike Europeans in the transatlantic circuit of uprooting and transplantation. Writing against this version of Asian American history, I maintain that Asians did not go to America; Americans went to Asia. I thus situate this telling within the expansion of European imperialism. The presence of Asians in America and Pacific Islanders within the U.S. orbit is a consequence of that expansion. Further, Pacific Islanders and Asians did not migrate for the same reasons as many Europeans, who were pushed by necessity and pulled by opportunities. Rather, Europe and the United States recruited Pacific Islanders and Asians as migrant laborers in the global traffic of goods and labor. Pacific Islanders, additionally, lost their lands, waters, and sovereignty to the imperial order….

…American History Unbound emerges from but also rewrites the standard narratives of nation. Through their struggles for sovereignty and the full rights of citizenship and membership, Asians, Pacific Islanders, and indeed all peoples of color in the United States, despite their discursive and material “minority” status, have transformed, and revolutionized, the nation. In that sense, American history from the fringes of the national consciousness reveals and clarifies the nation’s past and promise of equality in their fullness and entirety.

A survey of U.S. history from its beginnings to the present, American History Unbound reveals our past through the lens of Asian American and Pacific Islander history. In so doing, it is a work of both history and anti-history, a narrative that fundamentally transforms and deepens our understanding of the United States.