by Robert A. Karl, author of Forgotten Peace: Reform, Violence, and the Making of Modern Colombia 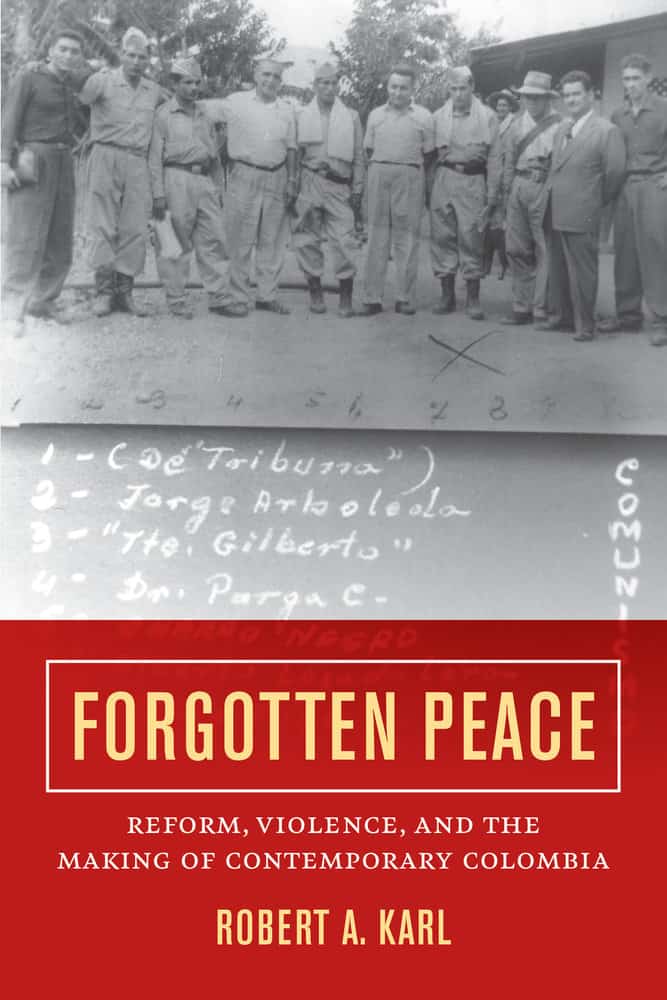 How do Colombians speak about “violence”? For much of the past half century, the Revolutionary Armed Forces of Colombia (FARC) have occupied a central place in popular and academic conversations. Yet representations of the FARC have begun to shift in recent months, as the Colombian government and the FARC move to implement their historic 2016 peace deal. The personal stories conveyed to international reporters by the FARC’s demobilizing fighters have helped to humanize the guerrillas’ five-decade-long struggle. In early April, the Colombian government also took the first steps toward establishing a truth commission to investigate Colombia’s contemporary experience with violence. Many Colombians hope that the commission, a key component of the peace accord, will give voice to the millions of victims of the wider Colombian internal conflict, as well as prevent the repetition of violence.

My book Forgotten Peace: Reform, Violence, and the Making of Contemporary Colombia considers the question of how Colombians spoke of violence in the 1950s and ‘60s, between the internal conflict known simply as La Violencia – The Violence – and the creation of the FARC in the mid-1960s. When Colombia entered into a period of democratic reformism in the late 1950s, thousands of rural Colombians – including the eventual founders of the FARC – stepped forward to share their experiences with violence and to propose solutions for their country’s problems. To borrow from the 2017 LASA Congress’ theme, this “dialogue of knowledge” altered government policy toward the countryside and forged new versions of local, regional, and national identity, to an even greater extent than what Colombia has thus far witnessed in the peace process with the FARC.

Forgotten Peace thus examines what I call the practice and idea of violence: not simply the where and why of acts of violence in the countryside, but also the conversations and writings that would shape enduring understandings of violence in Colombia. Specifically, Colombians’ gradual disillusionment with the reformism of the late 1950s and early 1960s produced two dominant narratives about the country’s history. The first originated with sociologist Orlando Fals Borda and his colleagues, who turned to the study of violence at the same time as they were also designing various government reform programs. My book demonstrates how the very term “La Violencia” – a mainstay of our conversations about violence in Colombia – resulted from these intellectuals’ conflicting scholarly and political commitments.

The second version of Colombian history to emerge in the 1960s came with the FARC. From the time that its fighters adopted that name in 1966, the group has been associated with revolutionary violence. However, this messaging has overshadowed the FARC’s origins in the local practices and ideas that comprised Colombia’s experiments with peace beginning in the late 1950s. Similar local meanings are now reemerging with the implementation of the peace accord, signaling the possibility of new dialogues of knowledge about the Colombian countryside. Such exchanges will be a small but fundamental part of Colombians’ push to build an inclusive, peaceful democracy in a nation best known for violence.

Robert A. Karl is Assistant Professor of History at Princeton University.