Though many in the Northern Hemisphere are more familiar with the traditional celebrations of the springtime season, people around the world also gather today to recognize the working class. May Day, sharing a date with International Workers’ Day and chosen to commemorate the 1886 Chicago Haymarket affair, serves to commemorate the fight for representation and rights for laborers worldwide — as well as the continuing efforts and struggle of the labor movement, shown by organized demonstrators and marchers every May 1st.

We invite you to peruse our recommended reading list that appears below in honor of May Day and the international labor movement.

Precarious Creativity examines the seismic changes confronting media workers in an age of globalization and corporate conglomeration. This pathbreaking anthology peeks behind the hype and supposed glamor of screen media industries to reveal the intensifying pressures and challenges confronting actors, editors, electricians, and others. With contributions from such leading scholars as John Caldwell, Vicki Mayer, Herman Gray, and Tejaswini Ganti, Precarious Creativity offers timely critiques of media globalization while also intervening in broader debates about labor, creativity, and precarity.

“Wide-ranging, diverse, and authoritative. . . this book succeeds in building a balanced and comprehensive portrayal of the reshaping of the contours of work and industry organization under the twin circumstances of digital disruption and a globalizing media system.” —Tom O’Regan, Professor of Media and Cultural Studies, The University of Queensland

Rather than offer publicity-friendly anecdotes by marquee celebrities, Voices of Labor presents off-screen observations about the everyday realities of Global Hollywood. Ranging across job categories—from showrunner to make-up artist to location manager—this collection features voices of labor from Los Angeles, Atlanta, Prague, and Vancouver. Together they show how seemingly abstract concepts like conglomeration, financialization, and globalization are crucial tools for understanding contemporary Hollywood and for reflecting more generally on changes and challenges in the screen media workplace and our culture at large.

“By listening carefully to their interlocutors, Michael Curtin and Kevin Sanson craft a powerful elegy for organized labor, demonstrating how critical theory is sung to the everyday rhythms of the workplace.” —Vicki Mayer, author of Almost Hollywood, Nearly New Orleans: The Lure of the Local Film Economy

A free ebook version of this title is available through Luminos, University of California Press’s open access publishing program.

Early in the twenty-first century, Louisiana, one of the poorest states in the United States, redirected millions in tax dollars from the public coffers in an effort to become the top location site globally for the production of Hollywood films and television series. Why would lawmakers support such a policy? Why would citizens accept the policy’s uncomfortable effects on their economy and culture? Almost Hollywood, Nearly New Orleans addresses these questions through a study of the local and everyday experiences of the film economy in New Orleans, Louisiana—a city that has twice pursued the goal of becoming a movie production capital. From the silent era to today’s Hollywood South, Vicki Mayer explains that the aura of a film economy is inseparable from a prevailing sense of home, even as it changes that place irrevocably.

“A visionary in the study of cultural labor, economy, and geography, Mayer is that rare writer who combines exquisite storytelling with rigorous scholarship. This is an essential contribution to film and media studies, and an urgent history lesson for policy makers.”—Melissa Gregg, author of Work’s Intimacy

The New Food Activism explores how food activism can be pushed toward deeper and more complex engagement with social, racial, and economic justice and toward advocating for broader and more transformational shifts in the food system. Topics examined include struggles against pesticides and GMOs, efforts to improve workers’ pay and conditions throughout the food system, and ways to push food activism beyond its typical reliance on individualism, consumerism, and private property. The authors challenge and advance existing discourse on consumer trends, food movements, and the intersection of food with racial and economic inequalities.

“The New Food Activism is one of the most important books on food this century. It is required, inspiring, and challenging reading for every student of food, every ‘foodie,’ as well as every grower, worker, and eater in today’s food system. . . groundbreaking.” —Seth Holmes, author of Fresh Fruit, Broken Bodies: Migrant Farmworkers in the United States

Precarious Claims: The Promise and Failure of Workplace Protections in the United States
By Shannon Gleeson

A free ebook version of this title is available through Luminos, University of California Press’s open access publishing program.

Precarious Claims tells the human story behind the bureaucratic process of fighting for justice in the U.S. workplace. How and why do vulnerable workers in low-wage industries, despite enormous barriers, come forward to seek justice, and what happens once they do? Based on extensive fieldwork in Northern California, Gleeson investigates the array of gatekeepers with whom workers must negotiate in the labor standards enforcement bureaucracy and, ultimately, the limited reach of formal legal protections. The author also tracks how workplace injustices—and the arduous process of contesting them—carry long-term effects on their everyday lives. Workers sometimes win, but their chances are precarious at best.

“A terrific collection . . . Resonating with our everyday experiences of life, this is a lively and thought-provoking volume.” —Miriam Glucksmann, Emeritus Professor of Sociology, University of Essex

The Last Great Strike: Little Steel, the CIO, and the Struggle for Labor Rights in New Deal America
By Ahmed White

In May 1937, seventy thousand workers walked off their jobs at four large steel companies known collectively as “Little Steel.” At least sixteen died and hundreds more were injured before the strike ended in failure. The violence and brutality of the Little Steel Strike became legendary. In many ways it was the last great strike in modern America. Traditionally the Little Steel Strike has been understood as a modest setback for steel workers, one that actually confirmed the potency of New Deal reforms and did little to impede the progress of the labor movement. However, The Last Great Strike tells a different story about the conflict and its significance for unions and labor rights. More than any other strike, it laid bare the contradictions of the industrial labor movement, the resilience of corporate power, and the limits of New Deal liberalism at a crucial time in American history.

“The Last Great Strike is a strong piece of scholarship, rich with archival discoveries. Compelling and accessible . . . an important contribution to our understanding of U.S. labor history, union organizing, and class conflict.”—Monthly Review 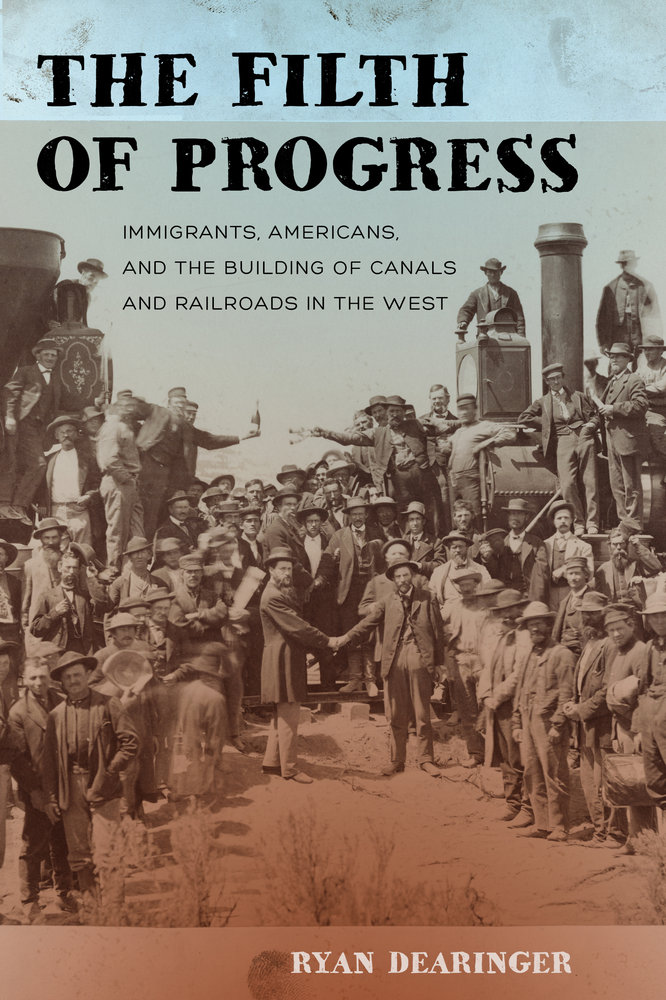 The Filth of Progress: Immigrants, Americans, and the Building of Canals and Railroads in the West
By Ryan Dearinger

In the summer of 1968 Peter Matthiessen met Cesar Chavez for the first time. They were the same age: forty-one. Matthiessen lived in New York City, while Chavez lived in the Central Valley farm town of Delano, where the grape strike was unfolding. This book is Matthiessen’s panoramic yet finely detailed account of the three years he spent working and traveling with Chavez, including to Sal Si Puedes, the San Jose barrio where Chavez began his organizing.

“The Filth of Progress persuasively outlines the dark underbelly of the much-celebrated ‘progress’ that transportation improvements . . . compact, vividly written.” —Thomas G. Andrews, Associate Professor of History at the University of Colorado and author of Killing for Coal: America’s Deadliest Labor War and Coyote Valley: Deep History in the High Rockies 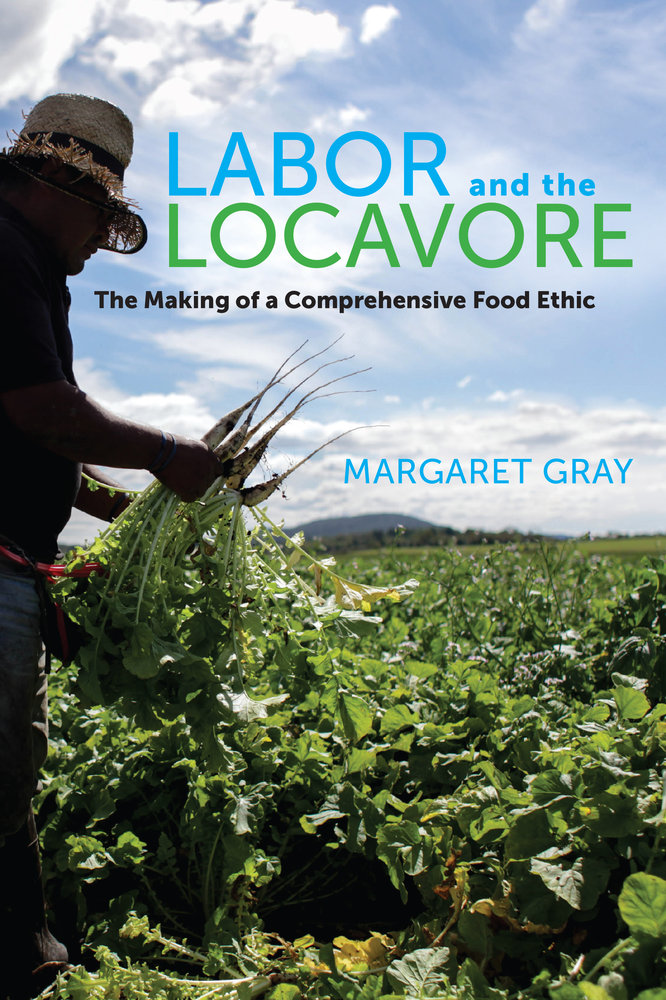 Labor and the Locavore: The Making of a Comprehensive Food Ethic
by Margaret Gray

Labor and the Locavore focuses on one of the most vibrant local food economies in the country, the Hudson Valley that supplies New York restaurants and farmers markets. Based on more than a decade’s in-depth interviews with workers, farmers, and others, Gray’s examination clearly shows how the currency of agrarian values serves to mask the labor concerns of an already hidden workforce. She also explores the historical roots of farmworkers’ predicaments and examines the ethnic shift from Black to Latino workers. With an analysis that can be applied to local food concerns around the country, this book challenges the reader to consider how the mentality of the alternative food movements implies a comprehensive food ethic that addresses workers’ concerns.

“Labor and the Locavore is a timely and important antidote to much of today’s popular food writing on eating local. . . Margaret Gray shows that labor abuses are not unique to industrial scale agriculture—or to California.” —Julie Guthman, author of Weighing In: Obesity, Food Justice, and the Limits of Capitalism

Agrarian Dreams: The Paradox of Organic Farming in California
by Julie Guthman

In this groundbreaking study of organic farming, Julie Guthman challenges accepted wisdom about organic food and agriculture in the Golden State. Many continue to believe that small-scale organic farming is the answer to our environmental and health problems, but Guthman refutes popular portrayals that pit “small organic” against “big organic” and offers an alternative analysis that underscores the limits of an organic label as a pathway to transforming agriculture.

Fresh Fruit, Broken Bodies: Migrant Farmworkers in the United States, With a Foreword by Philippe Bourgois
By Seth Holmes

Fresh Fruit, Broken Bodies provides an intimate examination of the everyday lives and suffering of Mexican migrants in our contemporary food system. An anthropologist and MD in the mold of Paul Farmer and Didier Fassin, Holmes shows how market forces, anti-immigrant sentiment, and racism undermine health and health care. Holmes’s material is visceral and powerful. He trekked with his companions illegally through the desert into Arizona and was jailed with them before they were deported. He lived with indigenous families in the mountains of Oaxaca and in farm labor camps in the U.S., planted and harvested corn, picked strawberries, and accompanied sick workers to clinics and hospitals. This “embodied anthropology” deepens our theoretical understanding of the ways in which social inequalities and suffering come to be perceived as normal and natural in society and in health care.

All of the book award money and royalties from the sales of this book have been donated to farm worker unions, farm worker organizations and farm worker projects in consultation with farm workers who appear in the book.

“By giving voice to silenced Mexican migrant laborers, Dr. Holmes exposes the links among suffering, the inequalities related to the structural violence of global trade which compel migration, and the symbolic violence of stereotypes and prejudices that normalize racism.” —Marilyn Gates New York Journal of Books

The US Elephant in the Salvadoran Room
Introducing American Studies Now: Critical Histories of the Present