As the Medieval Academy of America conference begins this week in Toronto, we’re featuring hits from our backlist of Ancient World titles, turning our focus to the Global Middle Ages and Late Antiquity. Our books look beyond Western Europe to the wider cultural networks in and between Europe, Africa, the Middle East, and Asia. As scholars studying the pre-modern world come from multiple backgrounds and departments, our list reflects not only that diversity, but also the increasingly recognized need for these different groups to be communicating with each other.

Below, browse some of the titles that reflect the range and breadth of the Global Middle Ages at UC Press, and if you’re headed to the conference, take advantage of our conference discount and browse more of our titles here.

“Enlightening. Whitfield’s skillfully crafted tales take readers on a journey back to the heyday of the Silk Road and enable them to relive its people’s unusual existence.”—Bloomsbury Review

Meta-Religion: Religion and Power in World History by James W. Laine
A groundbreaking text that brings power and politics to the fore of our understanding of world religions, placing religion at the center of world history. Both transformative and enlightening, Meta-Religion presents a powerful model for thinking differently about what religion is and how it functions in the world.

“This bracing account of the intertwining of religion and empire across world history is not only a useful tool for classroom use; it is also, in itself, a significant scholarly contribution.”—Katrina Olds, Professor of History, University of San Francisco

Patriarchs on Paper: A Critical History of Medieval Chan Literature by Alan Cole
The truth of Chan Buddhism—better known as “Zen”—is regularly said to be beyond language, and yet Chan authors—medieval and modern—produced an enormous quantity of literature over the centuries. Patriarchs on Paper charts the emergence of this kind of “fantasy Buddhism” and details how it interacted with more traditional forms of Chinese Buddhism in order to show how Chan’s illustrious ancestors were created in literature in order to further a wide range of real-world agendas.

“An original, innovative, and compelling history of Tang-Song Chan literature that challenges and corrects many of the more long-standing misrepresentations of the tradition.”—D. Max Moerman, Professor of Asian and Middle Eastern Cultures, Barnard and Columbia University

Charlemagne: Father of a Continent by Alessandro Barbero, translated by Allan Cameron
The most important study of Charlemagne in a generation, this biography by distinguished medievalist Alessandro Barbero illuminates both the man and the world in which he lived. Barbero not only brings Charlemagne to life with accounts of his physical appearance, tastes and habits, family life, and ideas and actions but also conveys what it meant to be king of the Franks and, later, emperor. Engaging and informed by deep scholarship, this account provides a new and richer context for considering one of history’s most fascinating personalities.

“The author of this rich, accessible study provides an intimate portrait of the man—right down to his shirt and underpants—and a sensitive analysis of his government and times. “—Publishers Weekly

Islamic Civilization in Thirty Lives: The First 1,000 Years by Chase F. Robinson
Distinguished historian of Islam Chase F. Robinson draws on the long tradition in Muslim scholarship of commemorating in writing the biographies of notable figures, but he weaves these ambitious lives together to create a rich narrative of Islamic civilization, from the Prophet Muhammad in the seventh century to the era of the world conquerer Timur and the Ottoman Sultan Mehmed II in the fifteenth.

“An elegant digest of the many colourful, creative and technologically innovative manifestations that the Prophet Muhammad inspired from his seventh-century oases in the Arabian peninsula.”—The Economist 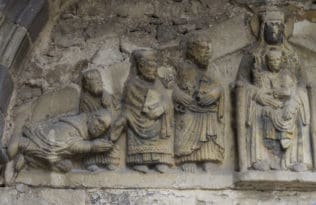 The Story of the Mozac Hunter Silk from Silk, Slaves, and Stupas