With the annual meeting of the Society for Cinema & Media Studies beginning this week in Chicago, UC Press journals Feminist Media Histories and Film Quarterly are pleased to offer a collection of limited-time free articles on cinema, soundtracks, and film music. Enjoy free access to these articles today through the end of the meeting on March 26, and be sure to meet the editors if you are attending #SCMS17! 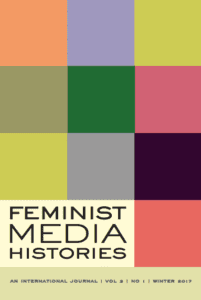 In Defense of Voicelessness: The Matter of the Voice and the Films of Leslie Thornto
Pooja Rangan
Summer 2015, Vol. 1 No. 3

Tinkering with Cultural Memory: Gender and the Politics of Synthesizer Historiography
Tara Rodgers
Fall 2015, Vol. 1 No. 4 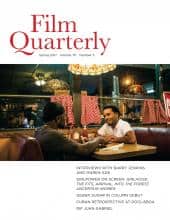 SCMS attendees: connect with FQ at SCMS 2017!
Associate Editor Regina Longo will be available for meetings at the UC Press booth on Thursday and Friday afternoons.

Just in time for #SCMS17, Film Quarterly is delighted to unveil a newly redesigned website at filmquarterly.org. The refreshed site is fully device responsive and features a stronger visual component with full integration of social media, audio, and video. Full journal content continues to be housed at fq.ucpress.edu, but subscribers and non-subscribers alike are invited to read a curated selection of articles and web-only features on the new filmquarterly.org site.

Given that the annual conferences for both SCMS and the Society for American Music are being held this week, Film Quarterly’s editors would like to call your attention to a selection of articles (all available for free on filmquarterly.org) that should interest attendees of both #SCMS17 and #AmMusic17.

One Step Ahead: A Conversation with Barry Jenkins,
Michael Boyce Gillespie’s interview with the director of the Academy Award-winning Moonlight appears in the newly published Spring issue of Film Quarterly (read online or stop by the UC Press booth at SCMS to peruse a print copy).

Giving Credit to Paratexts in Top of the Lake and Orange Is the New Black
Kathleen McHugh
Spring 2015, Vol. 68 No. 3

Announcing the Journal of Sound and Music in Games