The following is an excerpt of a report detailing the findings of the article Analysis of local-scale background concentrations of methane and other gas-phase species in the Marcellus Shale, which published in Elementa: Science of the Anthropocene on February 9. 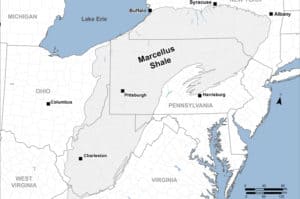 Despite a slow down in the number of new natural gas wells in the Marcellus Shale region of Northeast Pennsylvania, new research led by Drexel University finds that atmospheric methane levels in the area are still increasing. Measurements of methane and other air pollutants taken three years apart in the rural areas of Pennsylvania that have been the target of natural gas development over the last decade, revealed a substantial increase from 2012 to 2015.

“Methane is increasing globally, but the rate of increase for this region is much more rapid than global increases,” said Peter DeCarlo, PhD, an assistant professor who studies atmospheric chemistry in Drexel’s College of Engineering and College of Arts and Sciences, who led the study. “The rapid increase in methane is likely due to the increased production of natural gas from the region which has increased significantly over the 2012 to 2015 period. With the increased background levels of methane, the relative climate benefit of natural gas over coal for power production is reduced.”

Since the first shale gas wells were drilled in the Marcellus Shale Basin, a region that diagonally bisects the state from the northeast to the southwest, there have been concerns about what unlocking the new stores of fossil fuel by an unconventional method, called hydraulic fracturing, could mean for the environment. Nearly a decade later, researchers are still working to understand just how the chemicals released and the chemicals used to release them are lingering in the water and air. Read more…

Elementa: Science of the Anthropocene is a trans-disciplinary, open access journal committed to the facilitation of collaborative, peer-reviewed research, and with the ultimate objective of accelerating scientific solutions to the challenges presented by this era of human impact.