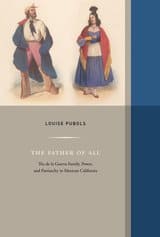 UC Press, Huntington Library Press, and Huntington-USC Institute on California and the West have launched a new series in the history and culture of the American West.

We are thrilled to announce this new partnership. Western Histories will publish new and important work exploring the widest possible avenues of the history and culture of California and the American West. The series is designed to take special advantage of research done under the auspices or support of the Huntington-USC Institute on California and the West. Our collaborative team includes, and benefits from the expertise of, Susan Green and Jean Patterson at the Huntington Library Press and Kim Robinson at UC Press.

Our inaugural book in the series is The Father of All: The de la Guerra Family, Power, and Patriarchy in Mexican California. Written by the historian Louise Pubols, Chief Curator of History at the Oakland Museum of California, this book presents a rich and nuanced study of a key family in California’s past. Amid sweeping economic and political changes, including the United States war with Mexico, the de la Guerra family continually adapted and reinvented themselves. This absorbing narrative is much more than the history of an elite and powerful family, however. Pubols analyzes the region’s trading and provisioning economy and clarifies its volatile political rivalries.

Of this book, the historian Steve Hackel writes: “This wonderful new book is the best study of patriarchy in Spanish and Mexican California I have read. Pubols applies in a creative way scholarship on patriarchy in Spain and Mexico to banish from this story images of noble pre-capitalistic dons who collapse once the Yankees come ashore. It provides a very useful analysis of the trading and provisioning economy in Spanish and Mexican California, and it clarifies much about the complicated political rivalries that characterized California during the Mexican period. Most importantly it brings to life the De la Guerra family and the drama of life in early Santa Barbara.”

Books to follow The Father of All include a collection of essays on the same period of the state’s history (essays drawn from a conference Steve Hackel organized at the Huntington Library); the first scholarly examination of the history and significance of the aerospace industry in Southern California; an exploration of Reconstruction-era racial politics in California; a volume assessing the history of technology in the far West; and a collection of some of the most important writings on civil rights in the West from the pen of a leading figure whose papers have only recently been assembled at the Huntington Library.

Please feel free to contact Professor Bill Deverell, Director of the Huntington-USC Institute on California and the West (deverell@usc.edu) for further information on the series. Books can be ordered either from UC Press or the Huntington Library Press.

Jean Pfaelzer in The Globalist: Are Apologies Enough?