Marching on Washington has returned to the center stage of national politics with The Women’s March on Washington in protest of the inauguration of Donald Trump and his administration’s policies. In their official policy platform, the march organizers invoke Martin Luther King Jr, quoting: “We cannot walk alone. And as we walk, we must make the pledge that we shall always march ahead. We cannot turn back.”

In the spirit of the protests and Dr. King’s inspiring words and revolutionary actions, we look back at the history of marching on the capital with Lucy G. Barber’s Marching on Washington: The Forging of an American Political Tradition.

In her preface, Barber writes:

Why do people march on W 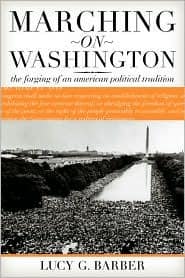 ashington? At times, as when this question was asked with sneering sincerity, I was tempted to respond that people gather because it is their right, which is too simple an answer for a question at the heart of this book. As you will learn while reading, people have not always had the right to march on Washington. It was won for us through the efforts of others. At some level the answer to this question is the same today as it was in 1894, when the first group marched on Washington. People who march on Washington believe that their opinion belongs in their capital, and they want to present it there themselves. They want to be with other people who share their opinion so that they can see each other and so that the rest of us can see them united. That they do so and can do so is something that I hope you will learn to value as an essential part of democracy.

Throughout Marching on Washington, Barber shows just how this tactic achieved its transformation from unacceptable to legitimate, beginning as early as 1894 when Jacob Coxey’s army marched into Washington, D.C., in the first concerted effort by citizens to use the capital for national public protest. Barber demonstrates how such highly visible events—including the women’s suffrage procession in 1913, the veterans’ bonus march in 1932, and the march on Washington for jobs and freedom in 1963, among others—contributed to the development of a broader and more inclusive view of citizenship and transformed the capital from the exclusive domain of politicians and officials into a national stage for Americans to participate directly in national politics.

Since 1894, millions of people have marched on Washington. When I began exploring the history of marches on Washington, I thought that the story would be relatively easy to tell. By exploring how ambitious, skillful, and daring organizers challenged the government for the right to protest in Washington during the twentieth century, I would counter prevailing assumptions at the end of the twentieth century that ordinary people no longer influence national politics. The story turned out to be more complex but also more interesting. Two intertwined and interrelated themes became the focus of my narrative: the changing spatial politics of the capital and the strategic uses of American citizenship. With these lenses, the history of marching on Washington is a story of spaces lost and spaces won. It is a story about the power of American citizens but also about the shifting terrain of citizenship. It is a story about the possibilities and the limits of the tradition of marching on Washington for changing national politics.