Take a peek inside the book the New York Times calls “a document of its time, of our time.” Named a “Best Book of 2016” by the San Francisco Chronicle and one of Publishers Weekly‘s “20 Big Indie Books of 2016,” Nonstop Metropolis: A New York City Atlas by Rebecca Solnit and Joshua Jelly-Schapiro has garnered love and praise from far and wide, from New York to London and beyond. This week we take you to a few stops on the maps through the lenses of some of the media—who are among those who walk, live, breathe New York as well as those who love it from afar. 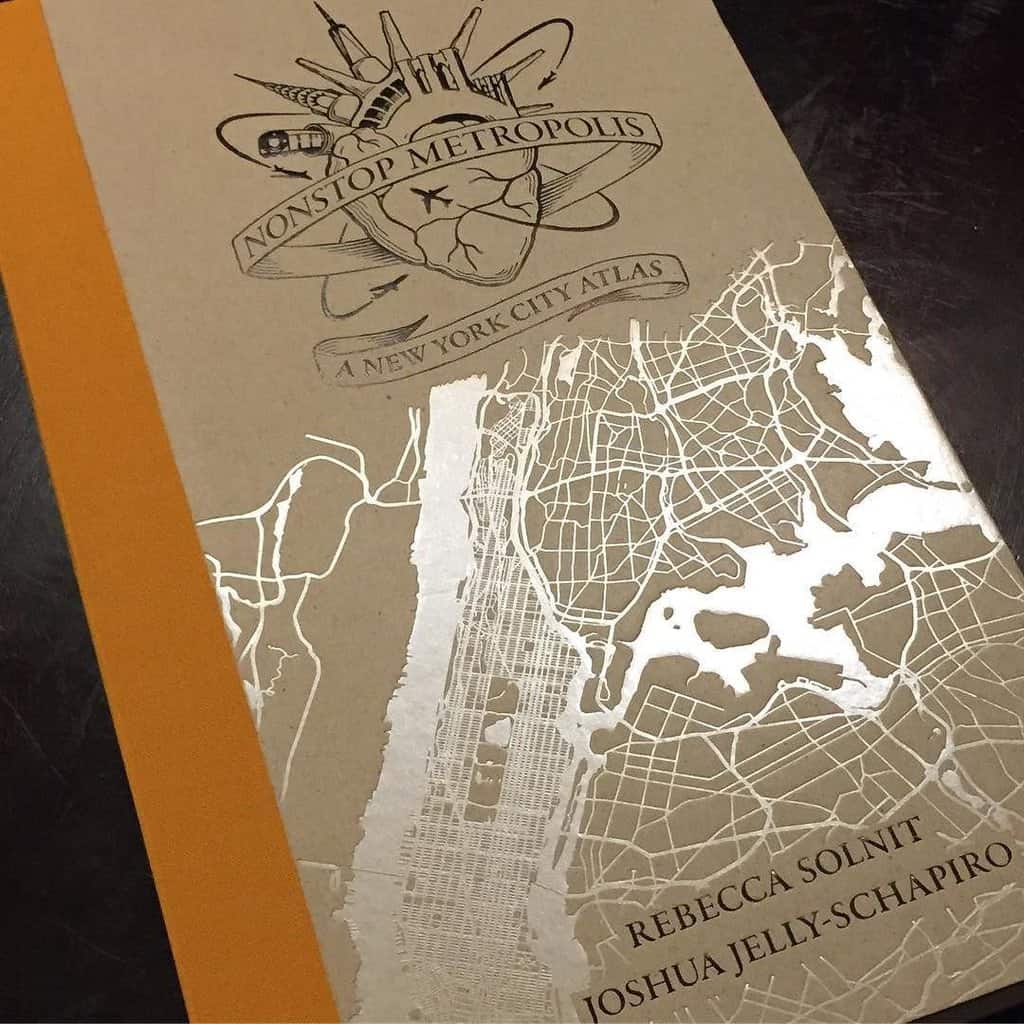 “. . . the maps themselves are things of beauty.”—New York Times

While the New York Times praised Nonstop Metropolis and its various contributors for capturing this time and place in the city, it also celebrated the book’s artistry, pointing out the level of attention and engagement it took to create this extraordinary series of documents. (To see how that magic was made, go behind-the-scenes with the book’s Art Director, Lia Tjandra, and Principal Editor, Dore Brown.) Twenty-six in total, the gorgeously rendered maps chart New York’s layered and hidden histories and truths. Take a quick flip through a couple of the maps below:

Maria Popova, the writer behind the delightful blog, brainpickings.org, highlighted her favorite selections from the book, turning her eye toward the diversity of the city and its inhabitants. “In reimagining the social and cultural landscape of New York,” she says, “Solnit and Schapiro reclaim the unmapped territories of being and the untold stories of beings marginalized by the dominant psychogeographies of their time — from women to Native Americans to wildlife species.”

The Jewish Daily Forward also noted the book’s ability to reveal and celebrate the diverse demographics within the city, featuring the map: “What Is a Jew?” which explores the question without finding a single answer; there are as many answers as there are people, ethnicities, identities. The maps explore the varied and rich histories beneath the city’s structures and designs; take a look at some of the details within:

“. . . eccentric and inspiring, a nimble work of social history . . . with dozens of exciting new ways to think about the five boroughs.” —San Francisco Chronicle

There are millions of ways to see a place; everyone has a personal cartography of their city. In New York, there are more than eight million people living in the city; eight million possible ways to map the city. Nonstop Metropolis and its contributors excavate just a few of the stories within the five boroughs (and the honorary “sixth” borough, New Jersey, which we highlighted in our recent blog series).

“. . .  makes tangible the social and cultural diversity of this extraordinary place.”—Times Literary Supplement

Cities can reveal themselves again and again, as the book shows. At a recent event for the book at City Lights Bookstore in San Francisco, Rebecca Solnit said: “Your phone will tell you where to go, but a good map can tell you where you are.” Nonstop Metropolis is a gift that keeps on giving with the many new ways to see New York and its people, a city as it was, is, and how it imagines itself to be.

To get a copy of Nonstop Metropolis: A New York City Atlas, visit your local bookstore, or purchase online at IndieBound, Amazon, Barnes & Noble, or UC Press (to save 30% on ucpress.edu, enter discount code 16W7970 at checkout).

Learn more about the beautiful and widely-loved book, as well as the two other volumes in the city atlas trilogy here. And browse other gift ideas from UC Press here.