As we make our way through Nonstop Metropolis: A New York City Atlas by Rebecca Solnit and Joshua Jelly-Schapiro, we’re dipping into some of the maps and essays featured within the atlas—each offering a vividly imagined version of New York that reveals a richly layered, social history. For more peeks inside, head here.

In New York, most of the city streets, stations, monuments, and bridges have been named for men. In Rebecca Solnit’s essay “Power of Names,” featured alongside the map “City of Women,” she describes the conventions and power structures behind the naming of cities and even whole regions:

“. . . names perpetuate the gendering of New York City. Almost every city is full of men’s names, names that are markers of who wielded power, who made history, who held fortunes, who was remembered; women are anonymous people who changed fathers’ for husbands’ names as they married, who lived in private and were comparatively forgot­ten, with few exceptions. This naming stretches across the continent; the peaks of many western mountains have names that make the ranges sound like the board of directors of old corporations, and very little has been named for particular historical women, though Maryland was named after a Queen Mary who never got there.”

Here, editors Rebecca Solnit and Joshua Jelly-Schapiro along with cartographer Molly Roy have renamed New York’s subway stations with the names of women by plotting the places where significant women have lived, worked, gone to school, danced, painted, wrote, and rebelled in order to come up with “a feminist city.” 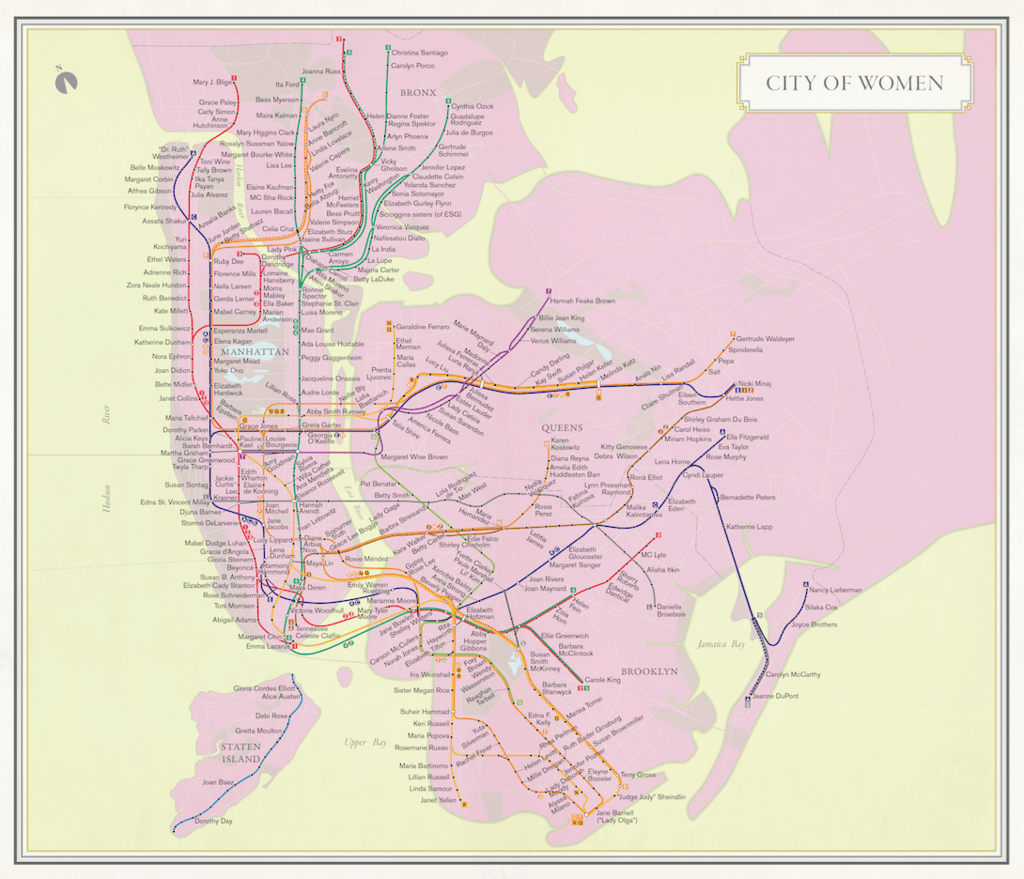 Solnit goes on to recognize some of the outstanding women whose efforts have contributed to society as a whole and what the map “City of Women” symbolizes:

“New York City has had a remarkable history of charismatic women from the beginning, such as seventeenth-century Quaker preacher Hannah Feake Bowne, who is routinely written out of history—even the home in Flushing where she held meetings is often called the John Bowne house. Three of the four female Supreme Court justices have come from the city, and quite a bit of the history of American feminism has unfolded here, from Vic­toria Woodhull to Shirley Chisholm to the Guerrilla Girls. Not all the subway stations are marked, and many of the women who made valuable contributions or might have are forgotten or were never named. Many women were never allowed to be someone; many heroes of any gender live quiet lives. But some rose up; some became visible; and here they are by the hundreds. This map is their memorial and their celebration.”

Peruse the map above (click to expand it) and take a look at a few highlights below:

Nonstop Metropolis is available now in paperback and hardcover.

Atmospheric Science and Ocean Science from Elementa: Science of the Anthropocene
Debunking Media Myths, Those Prominent Cases of Fake News